The Mare Island Hospital is a massive structure with an immense presence. Although it has been inactive for nearly six decades, this retired hospital is an impressive sight with a fascinating history.

Mare Island drew its name from General Mariano Guadalupe Vallejo himself, after the General had found one of his lost mares roaming in the nearby area. In 1854, U.S. Navy Admiral David Glasgow Farragut had taken possession of the island, establishing the very first naval yard on the west coast.

As the naval yard developed, the need for a medical facility became obvious. At first, the two earlier ships docked at the yard allowed use of their medical facilities until it was decided that an actual structure was needed on land.  According to historian Thomas Snyder, M.D., who has been researching the history of Mare Island Naval Hospital for over twenty years, the first land based hospital on Mare Island was actually an unused granary that had been converted into a make-shift hospital. The 30-bed facility was used from 1864 up until 1871.

In 1869, architect John McArthur was commissioned to design what would be the first grand Naval Hospital on Mare Island and officially the first on the west coast. The brickwork for the walls and foundation of the structure were made by brick mason, Dennis Jordan, who had underbid all other contractors to gain the job.  Jordan had each brick made by hand on site from the clay dirt on the property.  The cornerstone was laid on October 12, 1869, and the hospital officially opened on February 1, 1871.

The building was enormous in size. It stood three stories tall including an attic, with a grand Mansard rooftop. Ahead of its time, the hospital included modern amenities such as an elevator that went from the ground level to the second floor, voice tubes for communication within the building, telephones, electric call bells and even electric lighting for surgeries.  It also had an ongoing supply of fresh water piped in from Green Valley. 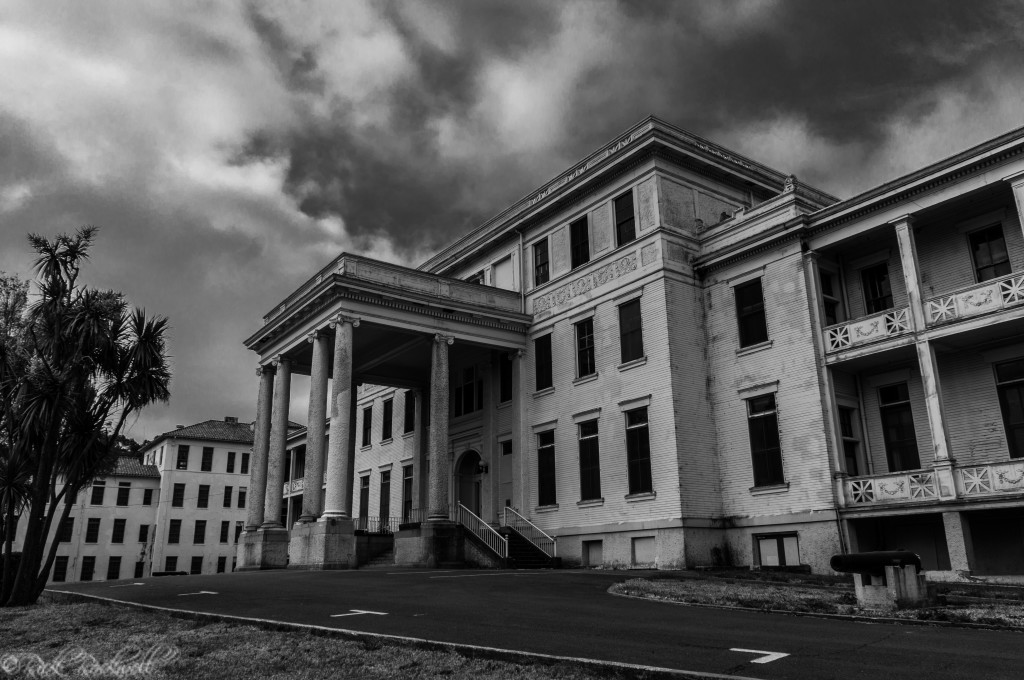 Around 11:43 p.m., March 30, 1898, Northern California’s Pacific Coast was hit with a massive tremor which seismologists today assume was close to a 6.4 magnitude earthquake, damaging many cities and structures in the bay area. Mare Island suffered the worst, with enormous amounts of damage from this event.  One of the many structures to suffer was the Naval Hospital. According to reports in the San Francisco Call, the hospital had “split it in a hundred different directions, and daylight filters through some of the rents in its walls.”

Patients were thrown from their beds, and rushed out onto the main lawn in front of the hospital, while everyone watched the enormous structure shake and rattle back and forth. The two 8-ton water towers attached to each of the hospital’s main towers swayed back and forth, while the cracks made their way from the foundation up to the eaves of the building. The two main towers shifted fourteen inches off plumb, while the 4-foot thick partition wall literally split from the basement to the attic. Thankfully all fifty people in the hospital escaped uninjured, but it was ascertained that the structure would have to be demolished completely for safety reasons.

“The whole building is like a house of cards; as massive as it is, it seems as if a strong wind would tumble it in ruins.”—San Francisco Call, March 31, 1898. 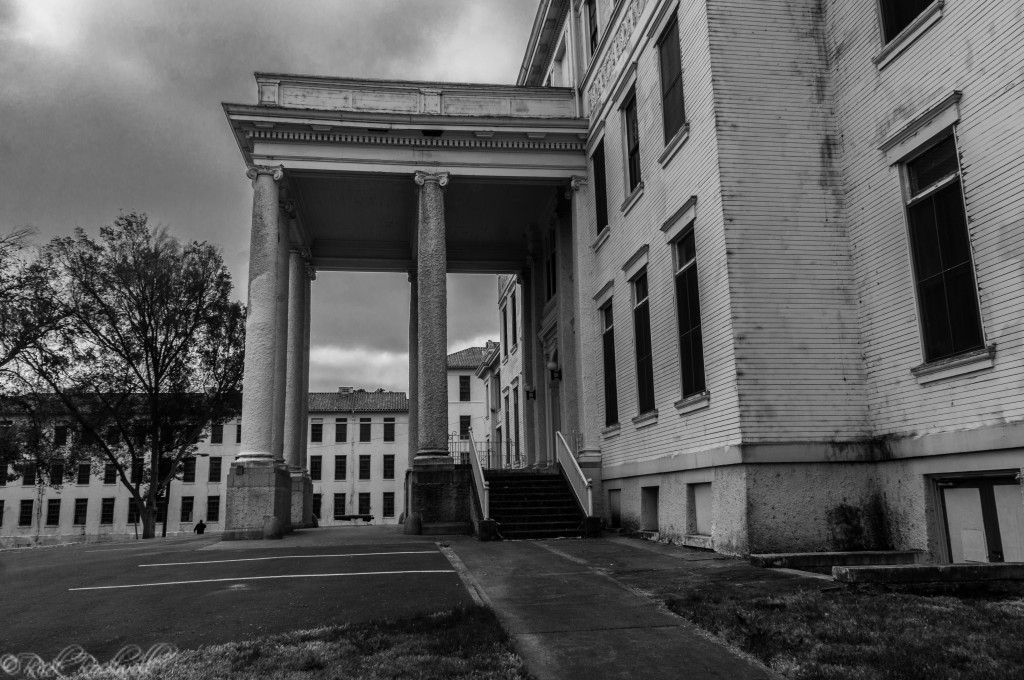 The second naval hospital was finished in 1901, and was built on top of the original foundation. It was said that over 113,000 original bricks were salvaged to use in building the new hospital’s basement walls. This time it was architect, W.M. Poindexter who was assigned the task to design a new hospital that could withstand earthquakes. Using neoclassical Beaux-Arts architecture, this structure was constructed mainly with wood, rather than its predecessor. Although the threat of damage from a tremor was alleviated, the newfound fear of fire damage came to mind. However, it would be over two decades before they would add fireproof structures to the surrounding property.

Said to have been the worst public health disaster of the 20th century, next to the arrival of the HIV/AIDS virus, the Spanish Influenza epidemic hit in 1918, leaving a death toll of over 675,000.  On September 23, 1918, Mare Island Naval Hospital’s senior medical officer received notice that the epidemic was spreading and that it was only a matter of days before they would see it on the Pacific Coast. The letter warned that nearly 20 percent of the staff there would become infected and over 10 percent would get secondary infections of pneumonia.

Quickly, arrangements had to be made to accommodate the 1,600 people they expected to become infected. Since the hospital only housed up to 200 people at a time, the staff decided to keep the main hospital for the seriously ill patients suffering from pneumonia. Makeshift tent-like structures were built over the surrounding property in order to make room for the sick ahead of time. 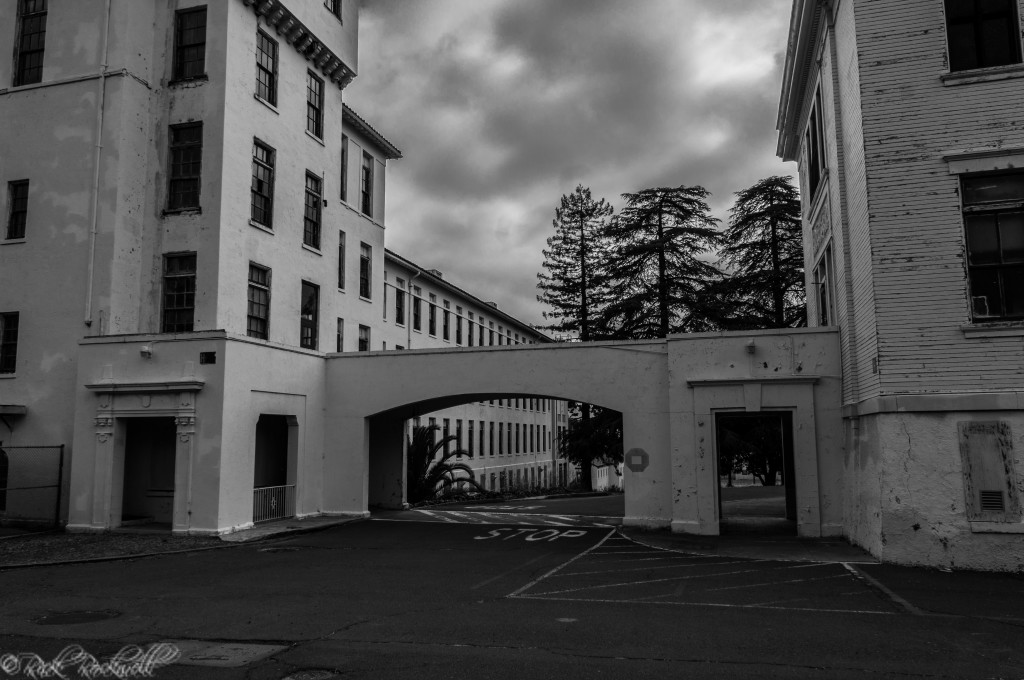 When they received their very first patient two days later, the influx of sick came in like a wave that persisted for over two months. Over 1,500 people fell ill, with hundreds affected by pneumonia. Entire families were sick, and there were not enough staff to tend to all the sick but they maintained to work and keep things under control as best as possible.  The naval yard was also affected by its lack of workers, as so many became ill with influenza that there wasn’t enough men on duty to work.  Although the illness subsided in November of 1918, it resurged again in the early part of 1919, causing the island to panic once more.

“Influenza in Vallejo serious and fast becoming epidemic. St. Vincent’s Catholic Church has placed school building at disposal Commandant as temporary hospital. Large majority of residents are Officers and enlisted men Navy and civil employees Navy yard and their families, and immediate steps should be taken to afford them medical assistance. Request authority to maintain temporary Naval Hospital at St. Vincent’s school and to expend necessary funds. Consider project most urgent to safe life and protect Navy personnel and civil employees.” Telegram from Commandment of the Naval Yard to Secretary of Navy, January 13, 1919.

Thankfully the second surge of the virus was short lived and it subsided as quickly as it came. When all was said and done, it showed that preparedness on the part of the hospital staff along with a strict quarantine of those with visible symptoms, kept the virus from spreading worse than it could have. 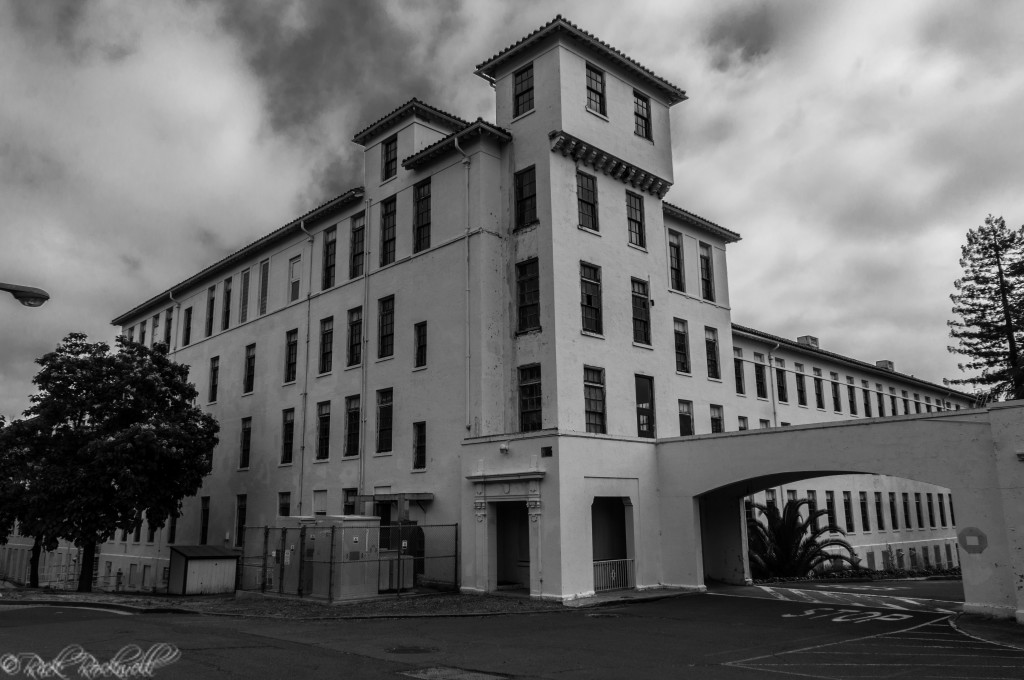 By 1928, more hospital buildings were erected on the property, allowing for the treatment of over 2000 patients. By the 1930s, the hospital had become famous for its specializing in the manufacturing of prosthetic limbs for patients, being dubbed the west coast amputation center for the wounded in the Pacific.  With the newer, fire-proof structures acting as the “hospital” quarters, the older part of the hospital was then turned into administration offices up until the entire hospital was closed in 1957.  The buildings then acted as headquarters for the School Command up until the naval base closure in 1997. Now the property is owned and occupied by Touro University.

My Experience at the Mare Island Hospital

On this day, I was actually heading out to visit the Mare Island Naval Cemetery before taking a tour of St. Peter’s Chapel. As I was driving to the cemetery, I happened to come across this massive structure. At first, I had no idea what the building was. It kind of reminded me of an older university, something that I would have seen on the East Coast.

I pulled up on the backside of this structure and it felt like I was in a small town or a scene from The Walking Dead. There’s a possibility that I watch too many zombie shows, if that’s possible.

Many of the doors and windows were boarded up. I walked around to the front of the main building and I was in awe of the layout. There’s an open courtyard, with a flag pole and two historic cannons. Additionally, you could just feel how prestigious this place was during its peak. It might have only been a Naval hospital, but it has a presence that screams prestige and nobility. 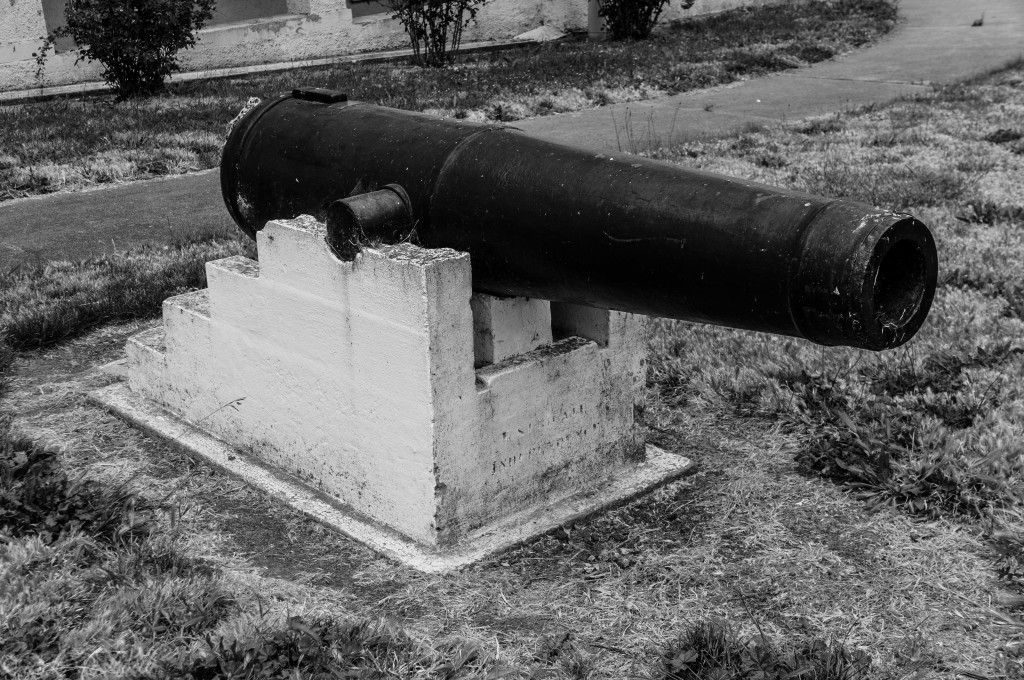 I love exploring abandoned structures, and Mare Island is filled with them. Unfortunately, this hospital is now privately owned by the University. Which means that it’s private property. So, after about 20-30 minutes of exploring and taking photos, I was greeted by a security guard. Now, this isn’t the first time I’ve come face-to-face with a security guard and it probably won’t be the last. However, once I explained to him why I was there, he allowed me a few more minutes to finish setting up my camera to take photos.

Although I never caught his name, I would like to thank the security guard for his patience and coolness in allowing me time to shoot. Additionally, he was the one who informed me that this was the old hospital and directed me to the University’s office to inquire about touring the inside of the building.

I’d also like to thank my friend J’amie Rubio who graciously contributed to this article with the historical content. She’s a very talented writer and published author. You can check out her work at her official blog.

Lastly, I encourage you all to check out Mare Island. It’s an incredible journey into this country’s military history. The island has a lot of charm mixed in with a lot of firepower. It’s uniqueness is unmatched by anywhere else in the state.

Check out more of my Mare Island adventures 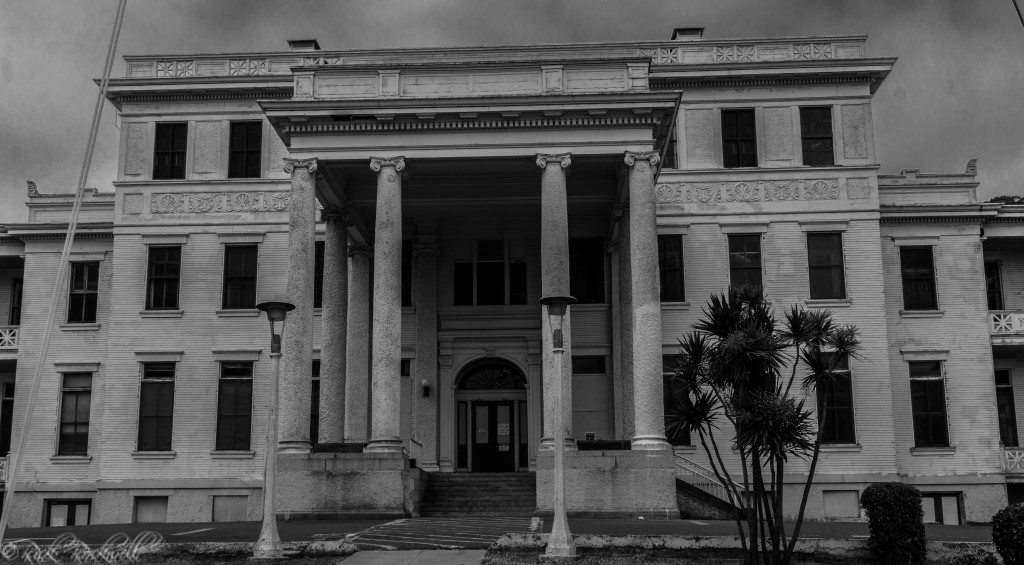 From I-80 – head toward Vallejo and exit on Tennessee St. Cross over the Mare Island Causeway and make a left at the flashing red light, which is Railroad Ave. Take this all the way down, past the waterfront, military buildings and head toward Touro University. The hospital will be on the right side of the street. You can’t miss it.