California’s Delta region has many wonderful remnants of an era that has long passed. One such remnant is the Ryde Hotel. Built in 1926-27, this hotel was once home to celebrities, politicians and the center of scandals during the Prohibition era. Hidden tunnels are said to have been under the hotel leading from the speakeasy in the basement all the way out to the river, where guests could easily escape onto a boat in the event of a raid. Even old gin and whiskey stills were found at one time, for mass production of alcohol for their patron’s intemperate habits.

What most people are unaware of is the fact that there had been two previous incarnations of the Ryde Hotel in the same general area many years before. 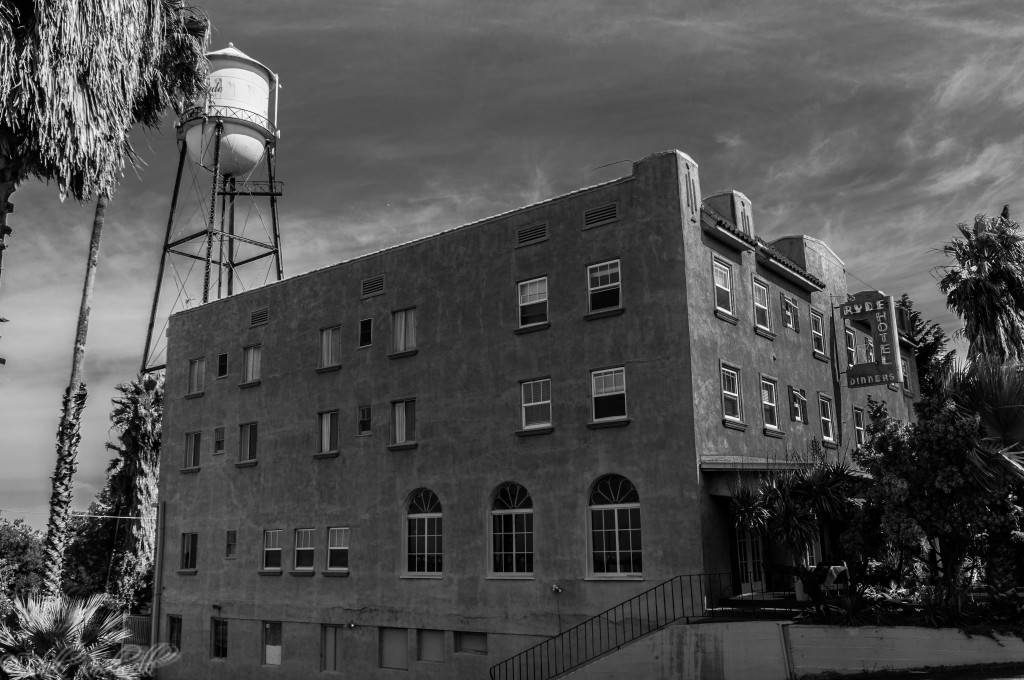 The first Ryde Hotel was built in 1886, by four brothers, Egisto, Pietro, Morro and Paolo Giusti. The Giusti family had emigrated from Lucca, Italy, only a short time before setting up residence in Ryde. The hotel and accompanying saloon found success until it burned down on Monday night, November 6, 1911.

According to a November 8, 1911 article by the Oakland Tribune, the fire started out in the kitchen of the hotel and swept through the structure quickly.  By now, the massive fire jumped from the hotel to a nearby stable, then to Fred Weber’s saloon, S. E. Brown’s store, a pumping plant and two of Mr. Kesner’s wharves. The article would go on to report that only after the fire had consumed everything in its path, did it finally burn out.

Once the dust and ash had settled, there was not much left of the small town, so the Giusti family decided to move to the other side of the river to start over.  It was now time for a new proprietor to pick up the pieces and rebuild. 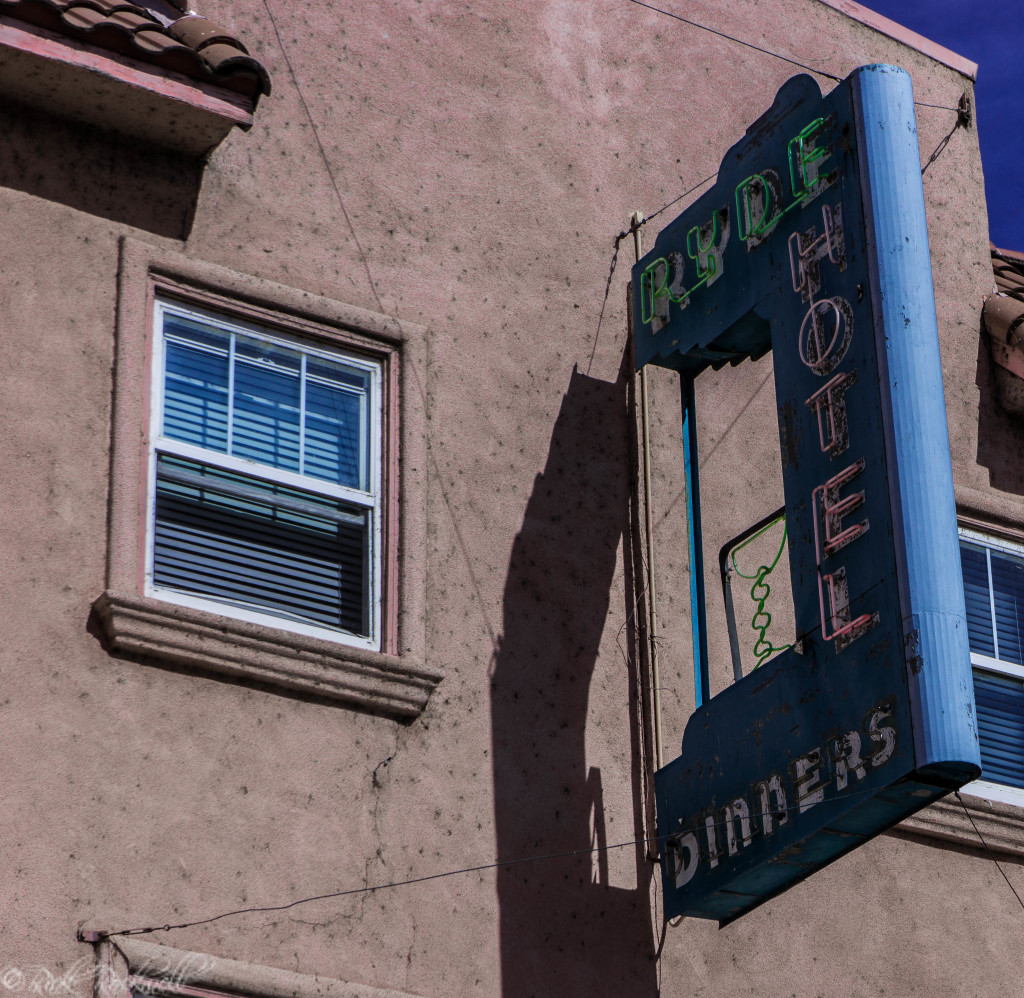 A newsletter by the Sacramento River Delta Historical Society, states that Joe Miller rebuilt the hotel around 1918 on the same location as the first hotel. He then leased it to L.O. Giannetti (also spelled Gianetti).

Both the first and second Ryde Hotels were located approximately where the parking lot area is today for the newer Ryde Hotel.  This is the hotel that saw a great deal of scandal during the early Prohibition era.

According to The Sacramento Bee, on January 2, 1920, patron Alex Johnson was shot by the bartender after he had been asked to leave and refused.  Johnson (spelled Johnston in the Oakland Tribune) was a former carpenter and resident of San Francisco.

The bartender, Orlando Fontanini claimed he was using self-defense after being attacked by Johnson first, stating that after he tried to close down the bar, Johnson became “abusive and attacked” him. After being grabbed by the throat, he reached for the revolver he kept at the bar and shot Johnson, killing him.  There is little information as to what became of Mr. Fontanini, as he seemed to have disappeared from any further Census records. There was also no luck tracking him down through prison records either, leading me to believe he may have been exonerated and left town.

The Ryde During Prohibition

On Friday night, May 6, 1923, a raid was performed on a hotel in Ryde by Deputy Sheriff M. V. Robbins. According to the San Francisco Chronicle, Paul Florellini was arrested for “the sale and possession of illicit liquor.” The hotel in question was believed to be the Ryde Hotel.

Roughly 5 months later, The Ryde was at the center of another scandal. This time the incident occurred after federal agents came to Ryde to enjoy dinner at the restaurant. Once there, they realized that the customers were being served alcohol illegally. While discussing it between themselves, the agents were approached by suspicious guests at the hotel who accused them of being law enforcement. As soon as the men admitted that they were federal agents, three of the guests attacked the agents, creating an all-out brawl between the agents and the three guests. One of the agents was cut severely after a bottle of alcohol was broken over his head.

After it was all said and done, Allan Eldred, William Donahue and Clay Locke were arrested along with the hotel proprietress, Mrs. Gianetti and her waiter, Nick Camacia.  They were all booked for conspiring to violate Prohibition Law, destroying evidence, assault of government officers and interfering with government officers.

Mrs. Gianetti and Nick Camacia were released on a $1,000 bond, however the three men who started the fight were held for $10,000.  The one person to be bailed out immediately was Clay Locke. It appears that Clay Locke may have been the son of George Locke, the founder of Lockeport, which later became known as the town of Locke, just a few miles down the river from Ryde. If that is the case, then that explains how he was able to make bail so quickly at the time. The Oakland Tribune didn’t even report Locke’s name in the November 12, 1923, article about this incident.

Mrs. Gianetti and Nick Camacia were released on a $1,000 bond, however the three men who started the fight were held for $10,000.  The one person to be bailed out immediately was Clay Locke. It appears that Clay Locke may have been the son of George Locke, the founder of Lockeport, which later became known as the town of Locke, just a few miles down the river from Ryde. If that is the case, then that explains how he was able to make bail so quickly at the time.

Between 1926 and 1927, the third Ryde Hotel was completed. It was designed by architect Jens Petersen of Sacramento and built by the Giannetti family right next door to the old Ryde Hotel. This new Art Deco hotel was considered luxurious and attracted a more affluent and cultured crowd.

The new hotel saw many changes over the years, from the end of Prohibition to the various owners that took over time and time again.  It has been said that even Hollywood horror film star Lon Chaney Jr., and his family once owned the Ryde Hotel.  Interestingly, the hotel’s website prides itself on the fact that this was a getaway for many elite Hollywood stars of the past as well as political figures. Even Herbert Hoover himself was a guest here in 1928, where he reportedly held a huge rally to announce his candidacy for President.

In 1936, the hotel was back in the papers for another crime. However, this time, the crime was committed against the hotel when Joe Johnson was arrested on charges of defrauding an inn keeper. You guessed it, it was Mrs. G. Gionetti in the middle of controversy again. According to a May 22, 1936 report by the Woodland Daily Democrat, Johnson left the hotel after racking up a bill for $12.50 and not paying it. Mr. Johnson was a well known resident of Woodland who proclaimed that he was innocent and could prove that he was. Unfortunately, that didn’t stop the police from arresting him. 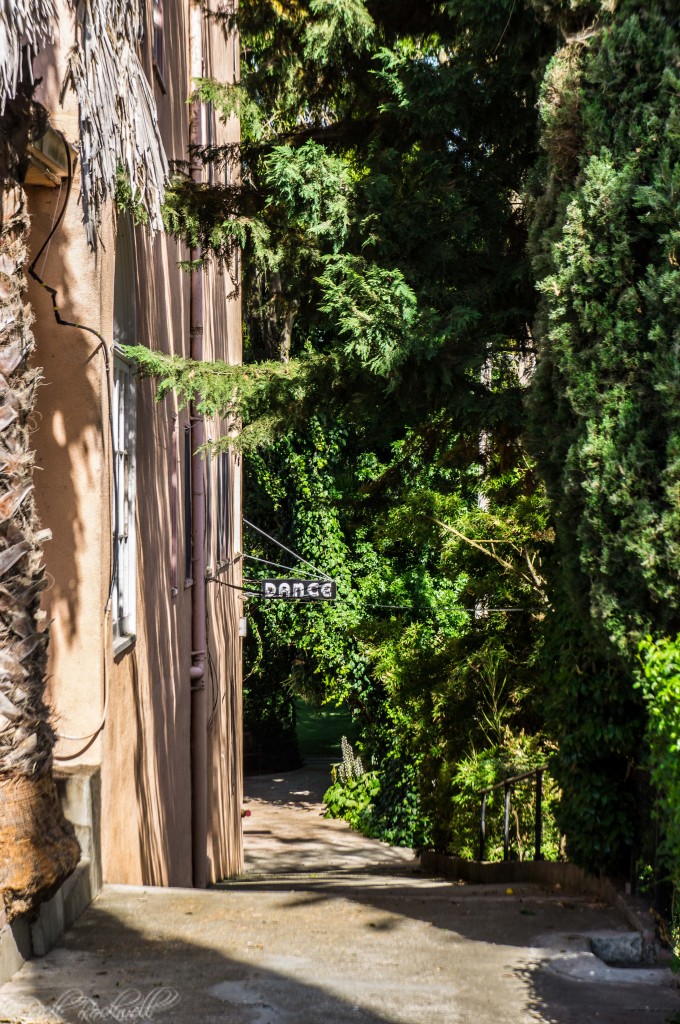 More Changes to The Ryde Hotel

In the 1950’s the hotel closed for some reason and L.O. Giannetti went and became the bartender at Giusti’s according to SRDHS.org. By the early 70’s, the building next door, which housed the old hotel, was demolished.

In the late 70’s, under the operation of Dave and Donna Phillips, the hotel was transitioning into a “Swinger’s Palace,” according to a report by the Santa Cruz Sentinel on July 29, 1977. The hotel had 42 rooms, shared bathrooms and room rates by the hour. In fact, you could even stay in a room for “just fifteen minutes.”

A name change took place at some point in the 80’s and the hotel was called the Grand Island Inn. At one point the place was even used as a boarding house for those who worked on the construction of the levee.

Despite all the changes and challenges, the jewel that is the Ryde Hotel continues to thrive on its own little slice of Delta Heaven along the Sacramento River. You can still visit the hotel, stay for the weekend, come for a Sunday Brunch or even have a wedding. The place has a magical feel all its own as you walk the halls and see the many photos of stars who were said to have stayed there in the past.  The atmosphere is one that is unmistakable and serene, and also one not to be missed. 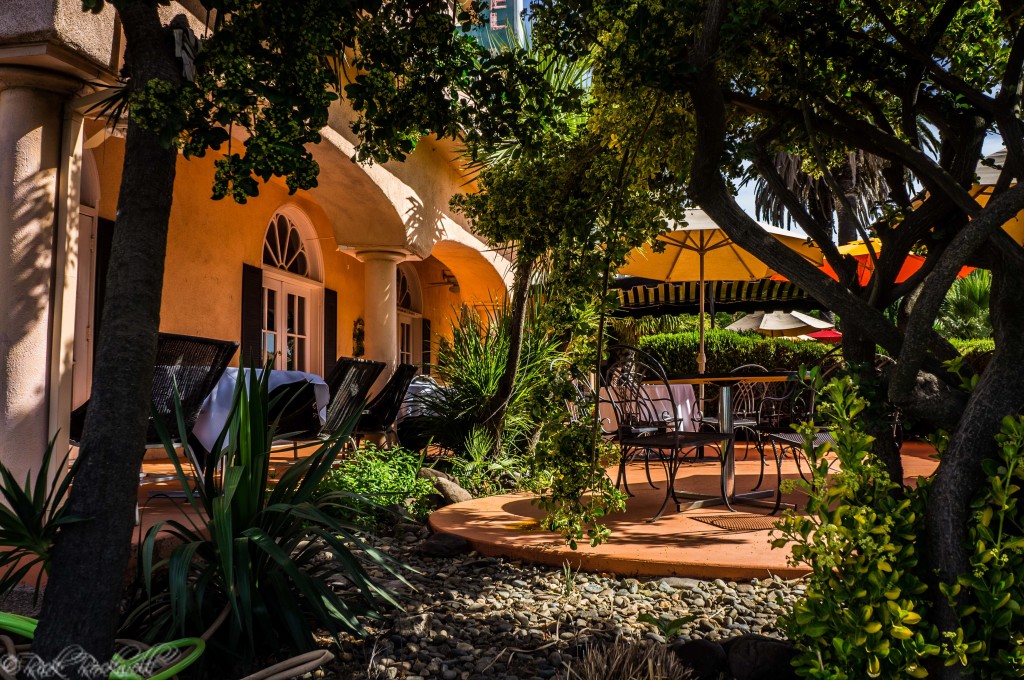 Final Thoughts on the Ryde Hotel

The historic, winding Highway 160, which curves with every bend of the Sacramento river, leads you unexpectedly to this magnificent hotel tucked away in the California Delta. Standing before the hotel, you can’t help but feel a rush of history and vintage charm. If you visit the hotel at night, you notice the neon lights flicker as the moonlight glistens across the moving Delta just below, leaving an air of mystery surrounding the property.

It’s a testament to the hotel’s uniqueness and rich heritage that The Ryde is still standing today. It’s not a highly populated area, nor is the old Ryde district a popular tourist attraction. However, once you see or visit this hotel, you won’t soon forget it.

Thanks to my friend – author J’aime Rubio for contributing to this article. 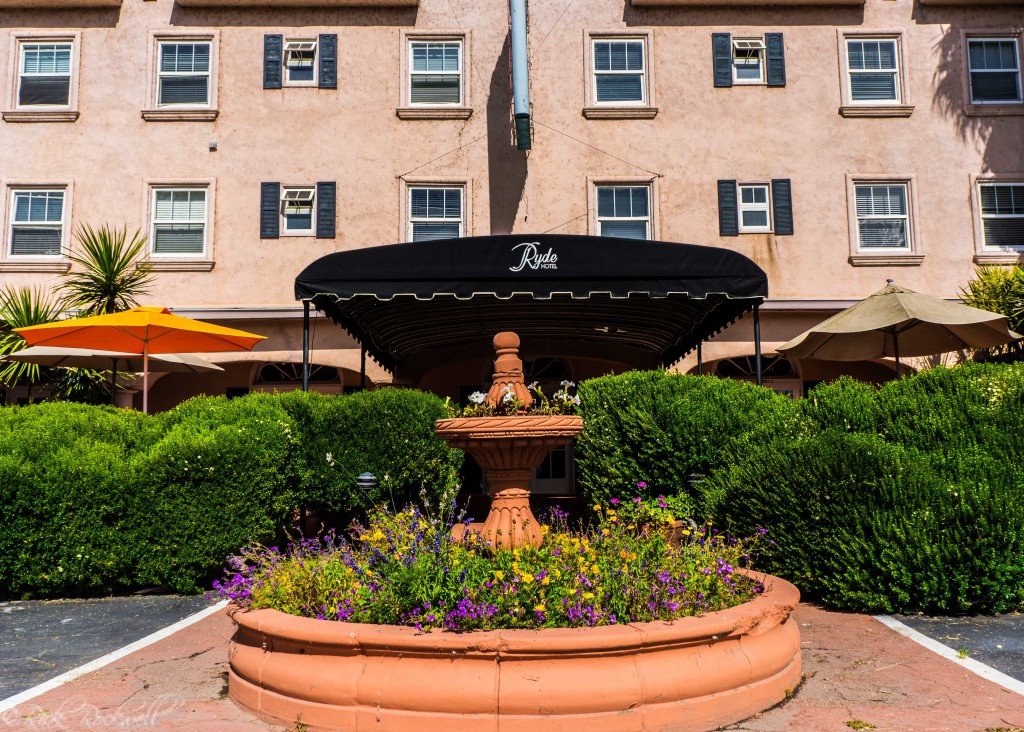 For more information on The Ryde Hotel, check out the official website. 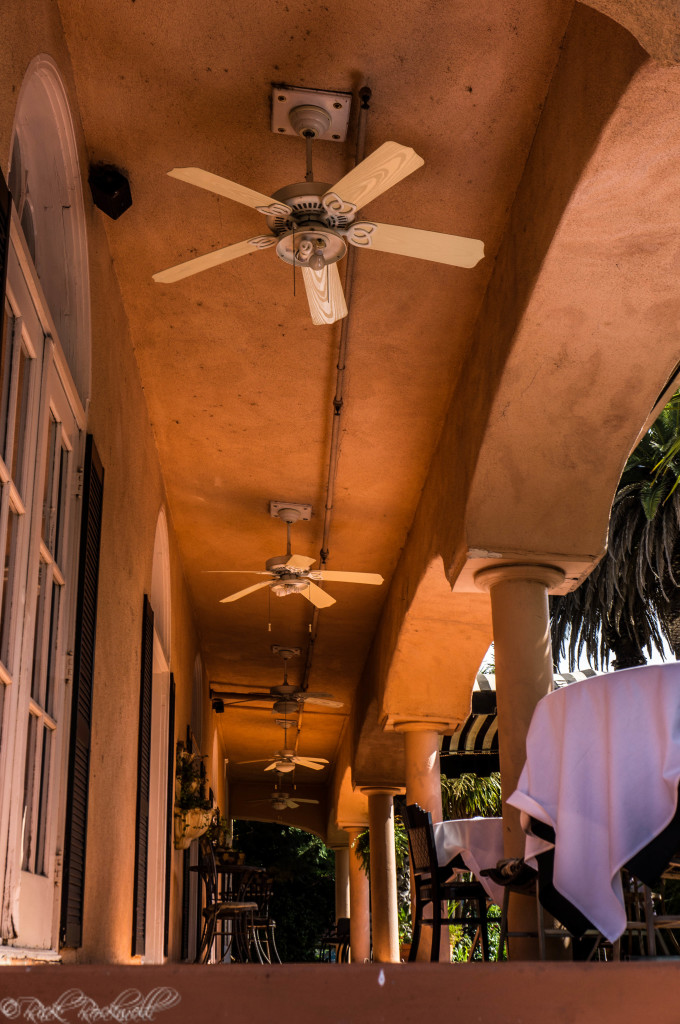