The Angora Fire Lookout, also known as Angora Ridge Lookout or Angora Lookout, is perched on the Angora Ridge above Fallen Leaf Lake at an elevation of 7,256 feet. Although the lookout is no longer in service, it remains a popular destination for hiking, biking and snowshoeing. Additionally, the lookout provides spectacular views of the Tahoe Basin.

History of the Angora Lookout

From 1910-1914, the US Forest Service in California underwent dramatic changes. Coert DuBois was the man responsible for these changes as his disgust for the previous administration’s ineptness and his dedication to fire prevention led to a massive overhaul of forestry policies and practices. Additionally, DuBois aided in the 1911 Congressional passing of “Weeks Law” and also helped motivate California’s State Legislature to appropriate money for fire prevention in 1919. The first state funded lookout was built in 1922, according to CalFire.

Two years later, the Angora Lookout was built on Angora Ridge in 1924. Shortly after, construction began on Angora Ridge Road, which wasn’t completed until 1929. According to one source, the construction of the road took nearly 5 years to complete because “It was all done by hand — a pick and shovel and crowbar, a very small amount of dynamite and a very great amount of sweat.”

The lookout was a Dubois-inspired structure that some think was built in the mold of a dwelling 1D, which Dubois included in a 1917 Improvement Circular. These 1D’s were believed to cost about $112 in labor plus materials, according to Foresthistory.org.

In 1933, FDR formed the Civilian Conservation Corps, which operated from 1933 to 1942 as a work relief program. In addition to many other projects, the CCC was tasked with building fire lookouts across the Nation. During this period, an estimated 250 lookouts were built in California. It was in 1935 that the CCC built a new Angora Fire Lookout next to the original structure, which was converted into a small residence for those manning the lookout. You can see the lookout in the photo above. (Photo found at CaliforniaLookouts.com)

In the early 1940’s, a garage structure was built next door. Also, during this era, lookouts doubled as spotters for enemy aircrafts.

Up to this point, the Angora Ridge Rd. was a rugged, steep dirt road. It wasn’t until 1963 that the ridge portion of the road was paved. The entire road wasn’t paved until 2005. 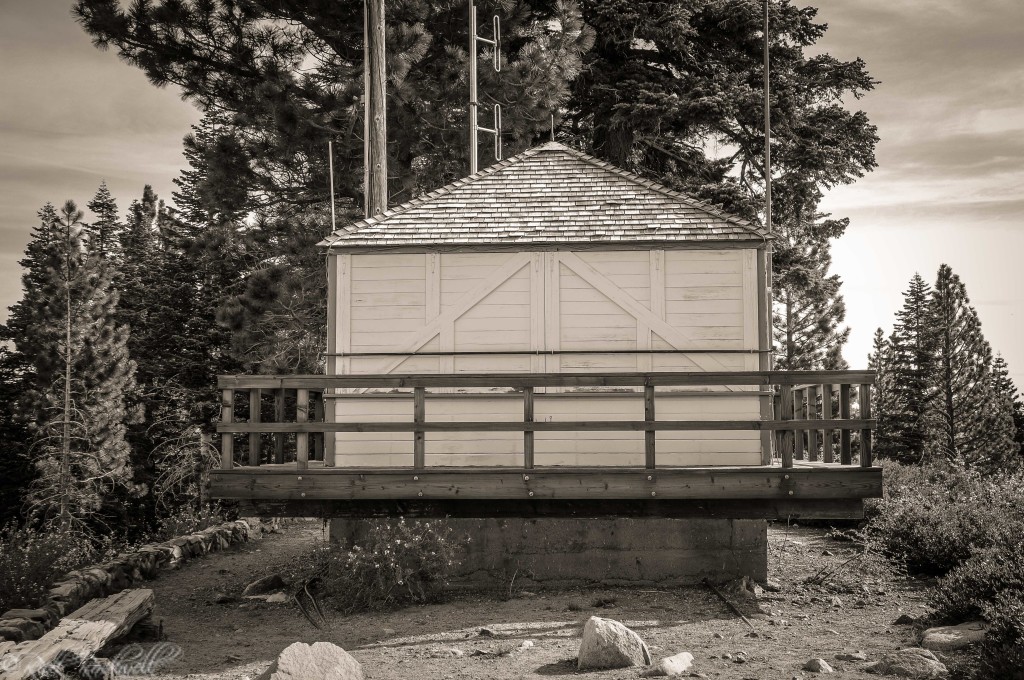 By the early 1970’s, a large percentage of lookouts had been retired throughout California due to an increased emphasis on newer technology and prevention methods such as airplanes and helicopters. It was during this era that the Angora Ridge Lookout was decommissioned.

Today, the Angora Lookout is a popular, historic point of interest that many visitors stop by on their way to the Angora Lakes. The buildings are typically closed and locked. However, there are some interpretive signs nearby and spectacular views. There’s enough room for a few cars to park in front of the garage where there are signs for parking.

The Angora Ridge lookout is one of only three surviving fire lookouts in the Tahoe region (Zephyr Cove and Martis Lookout).

On a related note, there’s a popular trail on the north shore of Tahoe that leads to the site of where a fire lookout once stood. You can read more about that in my article: Stateline Lookout Trail: an easy hike with spectacular views of North Lake Tahoe

Although the road has seen considerable improvements since the retirement of the lookout, extreme caution is recommended when driving along Angora Ridge Rd. There’s only one lane and drivers must use the small turnouts for other cars to pass by.

Additionally, this road is not open during the winter months. In fact, it’s typically opened April/May to September/October. If the road is closed, then it’s 1.85 miles from the closed forest gate at the beginning of the road to the lookout. Hiking and snowshoeing have become popular options for seeing the lookout when the road is closed.

In late-June of 2007, a massive fire started north of the town of Meyers and quickly spread north-by-northeast. The fire did most of its damage within the first 8 hours as it was heading towards Lake Tahoe. Thousands were evacuated and a local emergency was declared. Soot rained down from above as the skies looked like the apocalypse was at hand.

In total, over 3,100 acres of land was burned, 254 houses were destroyed and over $150 million in damages. An investigation was launched and the origin of the fire was determined to be caused by a human.

Today, when driving on Angora Ridge Rd. to the historic fire lookout and the lakes, you can clearly see the remains of this fire and the beautiful land that was destroyed.

This historic fire lookout is a wonderful point of interest that should be combined with a trek up to the Angora Lakes, which is located 1 mile beyond the lookout. Make sure you inquire into the road being opened before heading out this way. Even if you are uninterested in this historic structure, the views of the Tahoe Basin are definitely worth the trip up to the ridge.

Directions to the Angora Fire Lookout

From the split of Highway 89 and 50, head 3 miles on 89 toward Emerald Bay. Make a left on Fallen Leaf Lake Road, which is just past Camp Richardson. Drive roughly 2 miles until a fork in the road. Take the left fork, which is Tahoe Mountain Rd. Drive roughly 0.4 miles until Angora Ridge Rd., which is on your right side. Look for the gate at beginning of the Angora Ridge Rd. I didn’t see any sign for this road.