Located at Donner Summit, in Truckee, CA, is a memorial dedicated to the Chinese laborers known as “China Wall.” This historical marker, and 150 year old wall, symbolize the death defying work that the Chinese performed through the harshest of conditions in the Sierras, often losing many of their own during the process. The bravery of these men can’t be summed up into just one article or just one memorial. However, if you are lucky enough to get out to Donner Summit to see this historical work, then you can become a small part of keeping their historical efforts and bravery alive.

By the mid-1800’s, America was clamoring for a Transcontinental Railroad that would unite the west coast and its riches with the “civilized” east coast. In 1862, this American dream finally became a reality as Congress and President Abraham Lincoln authorized the Central Pacific Railroad (CPRR) to start laying tracks in California and build eastwards until eventually meeting with the Union Pacific Railroad (UPR) somewhere in the “middle” of California and Nebraska where the UPR started building westwards from.

The CPRR was financed by “the Big Four”: Leland Stanford, Charles Crocker, Collis Huntington and Mark Hopkins. The CPRR’s route was planned by Theodore Judah (who was the architect behind this transcontinental railroad idea) and the first rail was laid in Sacramento on Oct 26, 1863. At the rate they were going, and because of the costs, Crocker, who was in charge of construction and the workforce, was urged by his brother E.B. Crocker to hire Chinese laborers due to their hard work, lower wages and the fact that they were getting nowhere with their current workforce.

Crocker’s older brother E.B. (who was a lawyer, founder of the Crocker Art Museum in Sacramento and later CPRR Director) made the following comments about the Chinese workforce:

“Without them it would be impossible to go on with the work. I can assure you the Chinese are moving the earth and rock rapidly. They prove nearly equal to white men in the amount of labor they perform, and are far more reliable.”

In Feb. 1865, the CPRR experimented by hiring 50 Chinese laborers. When they proved to be hard working and dependable, the CPRR began mass hiring Chinese emigrants and soon had 3,000 of them in the fall, according to CPRR.org. By early 1866, the Chinese workforce grew to over 12,000 laborers, forming arguably the most significant workforce in the history of America. These Chinese laborers worked around the clock, every day, all year long, for roughly 4 years until the completion of the Transcontinental Railroad in May, 1869, at Promontory, Utah.

According to one source, Leland Stanford was quoted as saying the following about the importance of the Chinese laborers:

“The greater portion of the laborers employed by us are Chinese…. Without them it would be impossible to complete the western portion of this great national enterprise, within the time required by the Acts of Congress.”

The Chinese were paid at rates of $28 to $35 per month and were tasked with the most dangerous jobs such as drilling, blasting and laying track through deadly terrains like the Sierras. Additionally, their camps were unfavorable, unhealthy and compared to dog-kennels.

In the September, 1869 edition of Overland Monthly, Brett Hart made the following comments about the Chinese camps:

“Here is a “camp;” but, alas! none of the old style of snow white canvas, with its memories of refreshing sleep upon fragrant pine boughs; no, it is a Chinese camp, resembling a collection of dog-kennels, which, in fact, it is—each hut hastily made of “shakes,” about four feet high by six feet broad, and eight feet long.”

China Wall was built between tunnels #7 and #8 to support the railroad tracks by filling in the ravine. The lower wall (larger one) stands at roughly 75 feet high and was built with stones most likely removed by hand from tunnel #7. An up-close inspection of the wall will show that these rocks and the wall itself display an incredible mastership that continues to withstand some of the region’s harshest conditions roughly 150 years later.

Above the lower wall, is the upper portion of the wall which supports the embankment leading into tunnel #8.

To the west (right) of China Wall was where the old Lincoln Highway passed underneath the train tracks. 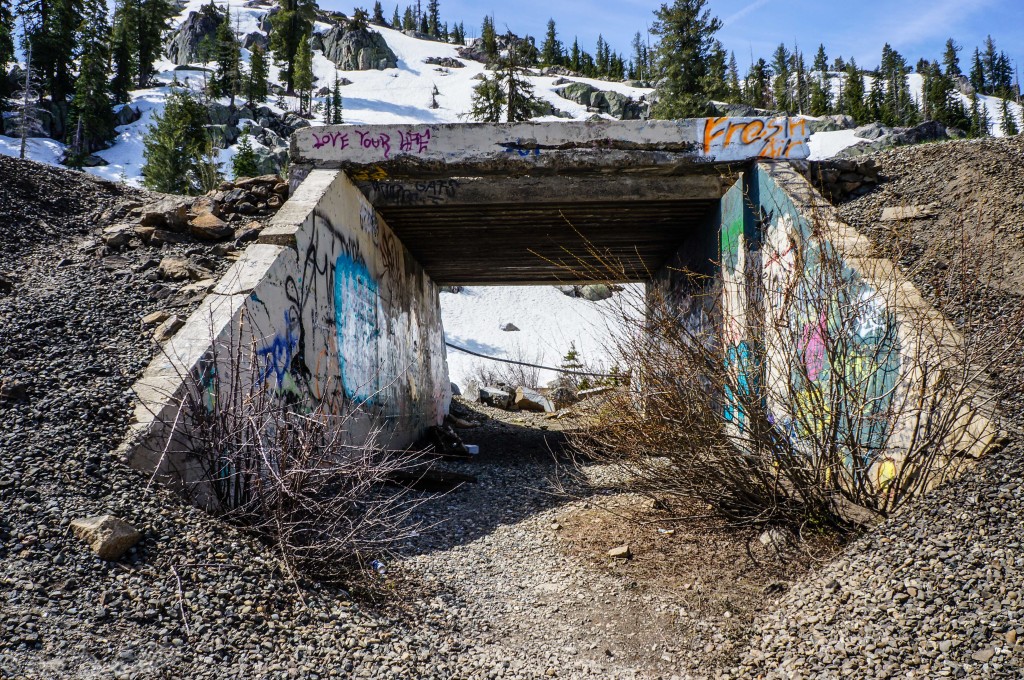 Growing up in Sacramento, my childhood was filled with history lessons on the railroad and the Gold Rush. As a kid, I visited many of the major museums and historical points of interest that were taught in our grade school classes. As an adult, I’ve explored many of the Gold Rush towns and Railroad towns that sprung up during the 1850’s and 1860’s. I’ve had the amazing experience of seeing a great deal of this region’s history that still remains. And, to further make my upcoming point, I’m also a loyal fan of the hit TV show Hell on Wheels which has done a visually incredible job bringing this historical plight to life.

With all of that being said, I never truly realized or fully appreciated the history and efforts of the Chinese laborers until seeing Donner Summit in person. China Wall and the abandoned train tunnels are remarkable symbols of the Chinese craftsmanship that helped to revolutionize America.

China Wall was part of an overall Donner Summit adventure that I had planned for the last two years. I was enticed by the abandoned train tunnels and captivated by the history of this region. In addition to China Wall and the train tunnels, is the nearby Donner Summit Bridge (Rainbow Bridge) and Native American petroglyphs.

I’ve divided up each of these points of interest into individual articles to better showcase their history, important details and photos.

It’s not hard to find China Wall, the tunnels and the petroglyphs. They are all located in the same general location, with the bridge a few hundred yards west.

Directions and Parking to China Wall

Once you pass through Donner and Norden, you will see the Donner Summit Bridge. A few hundred yards east of the bridge (further down DPR) is a small parking area on your right side. The China Wall historical marker (which was erected in 1984) is here and you can clearly see China Wall and the tunnels a few hundred feet above.

Depending on the season, the easiest way to get up to China Wall and the tunnels is by scurrying up the side of mountain directly toward the wall. If this seems too difficult, walk west about 100 yards from the parking area and take the little dirt path down toward the petroglyphs. From here, the trail crosses a more manageable and “flatter” terrain up to the train tracks and China Wall. The good thing is, you can always see these points of interest from your starting point at Donner Pass Road. And, unless you are in the winter time, the path up to these points of interest is not too difficult.

China Wall is a wonderful monument to the incredible work of the Chinese laborers during the building of the railroad. It’s located in the Sierras where so much history is packed into one little area – Donner Summit. Make this historical marker and wall part of a Donner Summit adventure that should also include the train tunnels, petroglyphs and the bridge. If you feel more adventurous, there are trails to hike beyond the train tracks and this is also a popular place for rock climbing. Don’t forget to soak up the views of Donner Lake from a distance.

California has another historical marker dedicated to the Chinese laborers. The following plaque is located on Highway 174 just outside of Colfax.