Located roughly 30 minutes northwest of Truckee, sits one of the region’s most remarkable waterfalls. In fact, during peak season, Webber Falls roars along the Little Truckee River and is a must see destination for any waterfall enthusiast. Surprisingly, this impressive waterfall is one of the area’s best kept secrets to outsiders and tourists.

Beginning at Webber Lake, the Little Truckee River flows in a southeastern direction through the region spanning roughly 30.6 miles before ending at a confluence with the Truckee River. A few miles east of Webber Lake, the river plummets roughly 60 to 75 feet into the canyon, forming the powerful Webber Falls.

The waterfall has two drops with the upper fall being roughly 12 to 25 feet and the lower (larger) fall being about 50 feet. During peak season, this waterfall sounds like thunder as you can hear it from the Jackson Meadows Road (County Road 7). 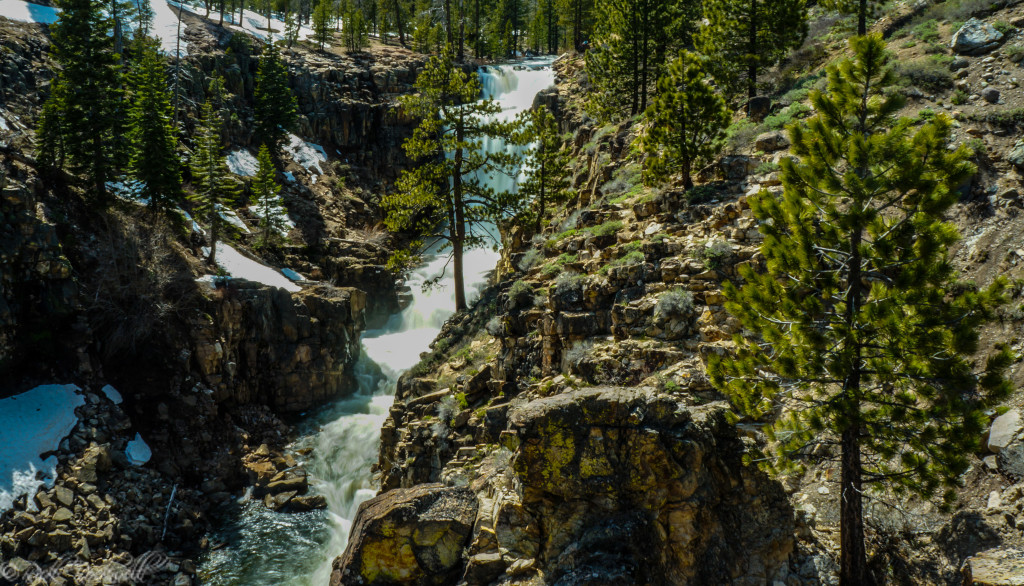 Webber Falls, and nearby Webber Lake, are named after one of the region’s beloved pioneers – Dr. David Gould Webber. What’s even more fascinating than his many successful business ventures, was Webber’s dedication to supporting orphans. From a young man, all the way to his final days, Webber adopted and/or supported at least 50-60 orphans. Additionally, his contributions to Sierra County are immeasurable. He’s one man who rightfully earned the attachment of his name to some of the County’s most cherished land.

Webber’s journey from his birthplace of Livingston County, New York, on Sep 12, 1809, to his residence in Sierra County is a fabulous tale that will require a future article. Most likely, after I visit the privately owned (soon to be publicly accessed) Webber Lake and the historic Webber Lake Hotel that was originally built in 1860.

This hotel, which still stands today, was built to provide a place for travelers along the old Henness Pass Road and to show off his magnificent land that included the lake and nearby meadows. Webber showed a great deal of compassion for his fellow man as he also built a sanatorium, charged very low rates, and often forgave any debts owed from those who used his services.

In his 33 years of residing in Sierra County, Webber left a wonderful legacy of compassion, commitment and hard work. Webber died on June 9, 1882, and is buried in the Loyalton cemetery next to his nephew.

After finishing up an exploration of the abandoned Donner Summit Train Tunnels, and a visit to the Donner Museum, I eventually made my way out to Webber Falls. The directions I found on the internet were less than desirable as I felt myself staring at the odometer and every road sign until the turnoff from Highway 89. My directions are at the end of this article.

County Road 7 (Jackson Meadows Rd.) is a two lane road that winds through some really beautiful scenery within Sierra County. Along the way, I highly suggest stopping and taking in the views of the pristine Perazzo Meadows which is roughly halfway between Highway 89 and Webber Falls on Road 7.

At roughly 6.5 miles down, start looking for a brown sign on the right side (north) of the road for Lake of the Woods. A few hundred yards pass this sign, is a pullout on the left side (south) of the road directly in front of a dirt road that may be closed off. At the time I went, the road was closed. So, I had to use the pull out. There are large rocks used as markers and a makeshift barrier for the pull out.

You have two options for getting down to the waterfall, you can cut directly south through the forest toward the sounds of the waterfall or you can walk down the dirt road, make a left on another dirt road near a makeshift parking area and walk south toward the waterfall. Both options will get you there safely.

As you get closer to the waterfall, the roaring becomes louder and it feels like the ground is shaking. This is where things get a bit tenser. From the second dirt road down, there’s more of a decline that leads straight to the edge of the canyon walls. There’s a lot of loose dirt and rocks depending on where you make your way down. Be mindful of the loose footing.

Once at the edge of the canyon walls, you will get some amazing views of the waterfall, the canyon and the Little Truckee River. This area can be slippery and I don’t recommend bringing children to this point. 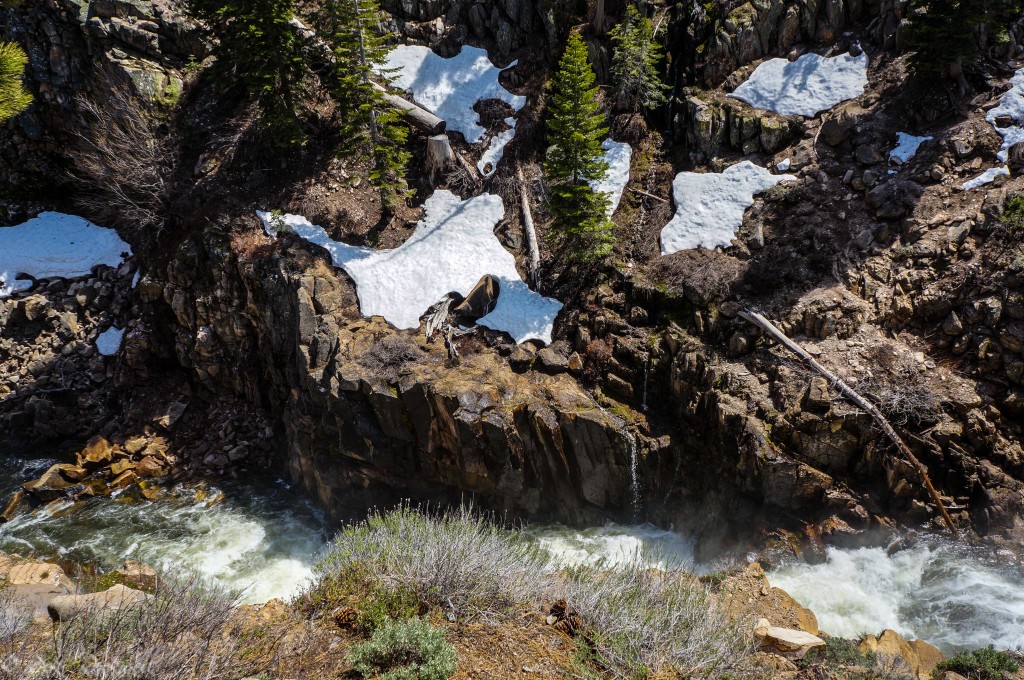 During the summer, when the waterfall is at a trickle, there are noticeable swimming holes above and below the waterfall. In fact, according to some locals I spoke with, Webber Falls is a popular recreational spot for residents of Sierra County during the summer months.

One thing that I should also mention, is that I came across a large amount of fire ants. They seemed to be everywhere along the edges. At one point, I was doing a fire ant dance to prevent them from crawling up my legs while setting up my camera for a shot.

Webber Falls is a must see destination during the peak months of April to June. I went in Mid-May and it was perfect as the waterfall was thundering. Webber Falls has all of the elements that you want in a waterfall: beauty, power, fullness, and size. Despite being relatively unknown to non-locals, this waterfall is arguably the best in the region. Pay close attention to the directions and you will definitely be happy that you saw this awesome waterfall. 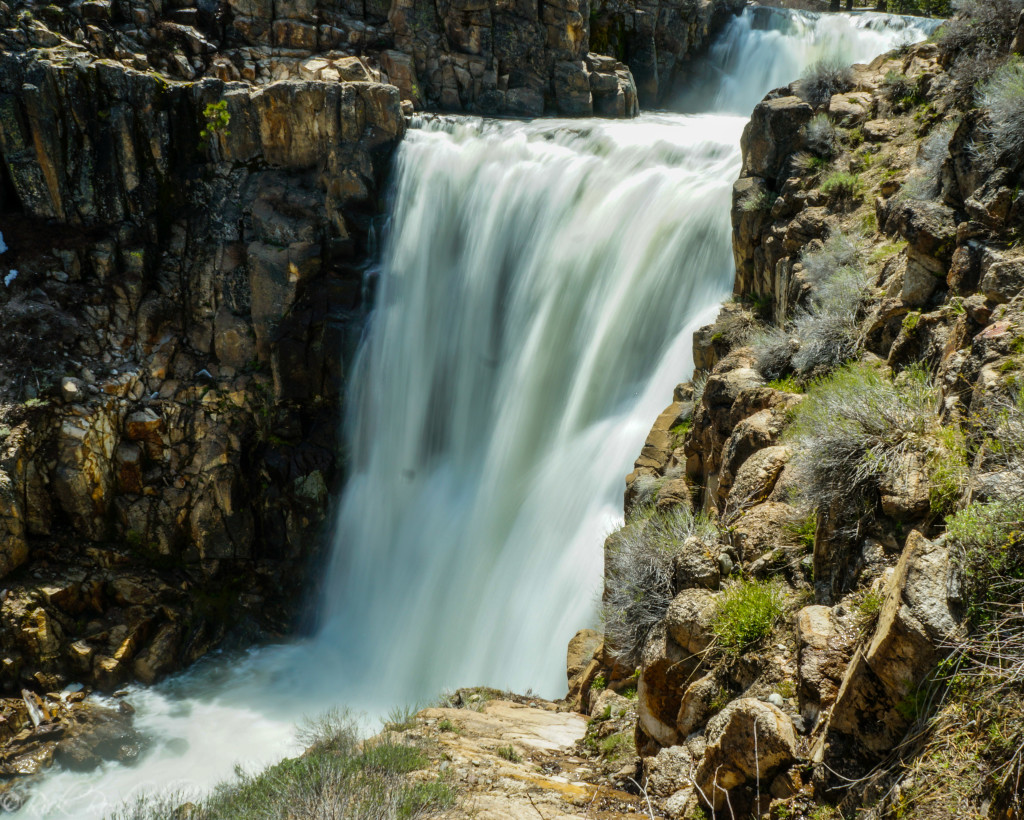 From Truckee, take Highway 89 north for 17 miles. Along Highway 89, you will pass the Kyburz Flat Preserve which includes the Kyburz Flat Interpretive Area that I recommend checking out. A few miles past Kyburz will be the turnoff to Little Truckee Summit, which is County Road 7/Jackson Meadows Rd. You will see a big green sign on the right side of the road. On the left side of the road is a parking area for the Summit, with a bathroom. Get in the turning lane and turn left onto this county road toward Jackson Meadows. Continue on the county road past the parking area for another 6.5 miles. You will pass along the way the Perazzo Meadows which will be on your left side (north) and is worth pulling over to check out.

Once roughly 6.5 miles down the county road, start looking for a sign that says to Lake of the Woods and a dirt road heading to the right (north). A few hundred yards past this sign will be a pullout and another dirt road on the left side (south). This is the entrance point for Webber Falls.

This dirt road may or may not be closed depending on the season. If the road is closed, then park on the pullout in front of the large rocks. If it’s open, then take the dirt road down to a makeshift parking area, which is a few hundred yards south of Jackson Meadows Rd. and the pullout.