The Donner Summit Bridge is a concrete arch style bridge originally designed to provide a safe passage through the Donner Pass area along Old Highway 40. Prior to this bridge, residents and visitors took the train or had to travel along the old Lincoln Highway which was a much more difficult route due to its winding down the summit at steep grades. Also known as Rainbow Bridge or Donner Memorial Bridge, this concrete span has similarities to other bridges in Northern California but, it also has some unique aspects that no other bridge had at the time like a grade and a compound curve.

The Need for a Bridge

In the 1920’s, a boom in automobiles, transportation demands and the lumber mill industry of the Sierras, facilitated the need for an improved route from Truckee down the mountain toward Sacramento and the towns in-between.

To address this need, the State of California began constructing a highway in 1923 to meet the modern day demands. Additionally, travelling on Lincoln Highway over the Summit became extremely difficult for larger vehicles. The following year saw the road completed to within a half mile east of Donner Summit. The U.S. Forest Service owned the land over the Summit and had to step in to complete this construction.

The following clipping is from the Sacramento Union, November 26, 1922. 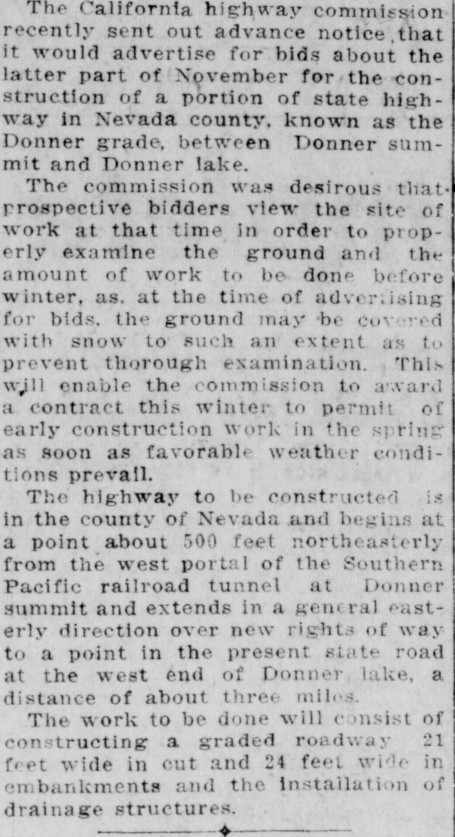 The Completion of Rainbow Bridge

According to Bridgehunter.com, the bridge was ultimately under the supervision of State Engineer Harlan D. Miller who made a significant impact on California during his three year tenure. The construction of the bridge began in 1924 with an estimated cost of $26,000. Gravel and sand used to construct the bridge was taken from Donner Lake. Due to some mid-construction changes, the bridge ended up costing just over $37,300 upon its completion in 1926, according to DSHS.org. Donner Summit/Rainbow Bridge has a total length of 241 feet and a deck width of 24 feet.

An interesting side note, when it came time to dedicate the bridge, all survivors or descendants of the Donner Party (if any) were invited to attend this ceremony. The following is a newspaper clipping from the Healdsburg Enterprise, August 19, 1926. 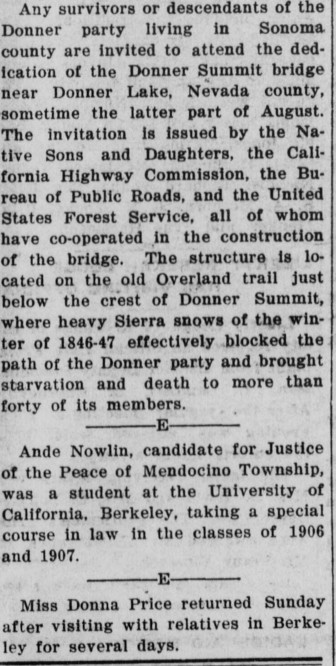 Even after the completion of Old Highway 40 and the bridge, travelers weren’t able to use this route during the winter due to the road being unplowed. It wasn’t until late 1931 that snow plowing began. The following clipping is from the Madera Tribune, August 21, 1931. 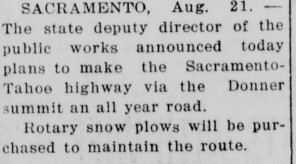 Also around this time, construction for Lookout Point was completed. This parking area provides some beautiful views of Donner Lake, Donner Summit and Truckee.

Rehabilitation of the Bridge

With the completion of I-80 in 1964, the State passed Old Highway 40 over to the local counties. Unfortunately, over the next few decades, the bridge and road suffered deterioration due to the harsh winters and heavy usage. By the 90’s, the bridge was in dire need of repairs. The county, and locals, faced a decision of tearing down Donner Summit/Rainbow Bridge and building a new one, or to repair the historic bridge. Local sentiment prevailed and the old bridge was rehabilitated in the mid-90’s. 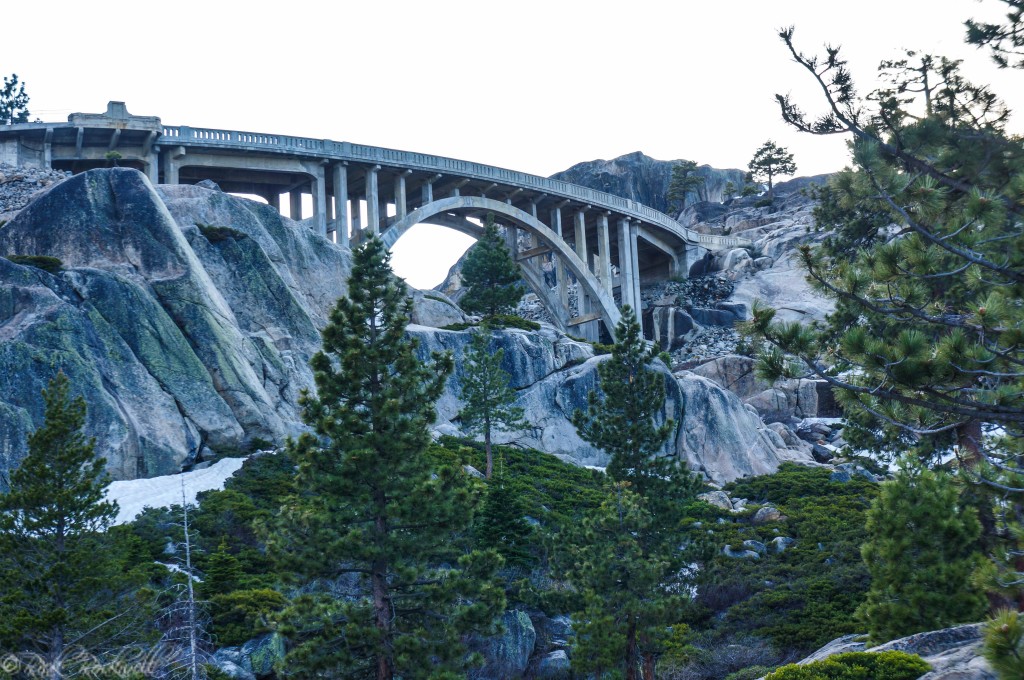 Donner Summit Bridge/Rainbow Bridge might not be the most impressive looking bridge in all of California, but it is situated in one of the most impressive scenic locations in all of California. No matter the season, views from this bridge are incredible. Additionally, the history packed into this Summit/Pass is unmatched by any other bridge. I suggest making a visit to this bridge as part of an overall adventure to the Donner Summit area, which includes seeing the abandoned train tunnels, the Donner Pass petroglyphs and China Wall.

No matter the direction you come from, you will go over the bridge. Parking at Lookout Point is just east of the bridge.