Prior to covered wagons, the Donner Party, the Gold Rush and the railroad, Donner Pass was home to an ancient Native American tribe referred to as the Martis Tribe (Martis People or Martis Complex). It’s believed that this tribe lived throughout Northern California and the Sierras from 2000 BC to 500 AD. As of now, it remains unclear as to why they initially migrated to the region and where they went after leaving the area. Fortunately for us who enjoy Native American history and/or ancient rock carvings, this tribe left us some fascinating petroglyphs that can be found in the same area as China Wall and the abandoned Donner Train Tunnels at Donner Pass. 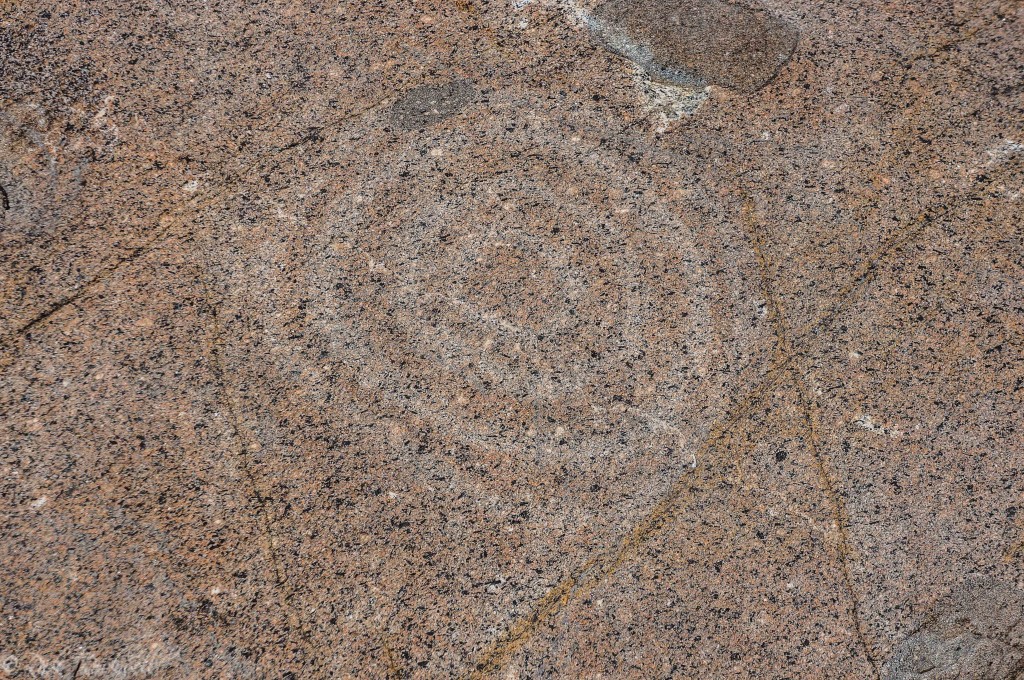 Who were the Martis People?

Near the time that the Martis arrived on scene, the climate and environment were primed and ready for a tribe to live a sustainable life. The water sources of lakes and rivers were flowing, the climate had predictable seasons and there was plenty of food from seeds to animals.

The Martis took advantage of the region’s bounties as they were both known for their hunting and seed gathering. Some of the animals they hunted were mountain sheep, deer, elk and bison. Acorns were also a main source of food for the Martis.

The heavy usage of basalt, and little usage of obsidian, are prominent characteristics of the tribe as well. The Sierras have little to no sources for obsidian, which is lighter and great for tools and arrowheads. According to DSHS.org, the Martis people are well known for their usage of manos (smooth oval rocks to grind seeds) and metates (large grinding sticks). You will also find many grinding holes throughout the Donner Pass area, which are mainly used for grinding seeds into flour.

Where did the Martis go?

Most scholars believe that the tribe left the Northern Sierra region around 500 AD. However, the majority of these sources have no idea where the tribe migrated to. Willis Gortner, perhaps the leading authority on the Martis people, speculated that the tribe migrated south to Yosemite as there are some archaeological and anthropological findings suggesting similarities. Gortner’s book “Martis Indians: Ancient Tribe of the Sierra Nevada,” is arguably the most thorough study of the Martis people to date. 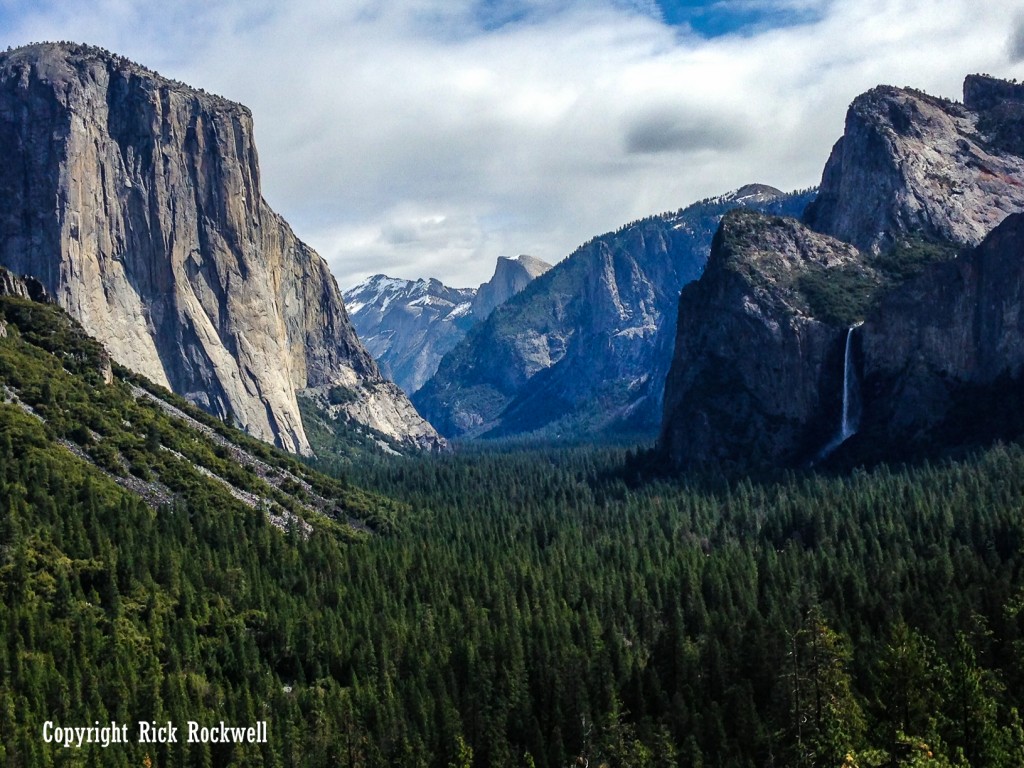 Descendants of The Martis People

Unfortunately, we may never learn if there are any direct descendants to the Martis people; thus adding to the mystery of this tribe.

There have been numerous in-depth studies on the ancient rock carvings found in this region. In the late-90’s, The California Department of Forestry authored an exhaustive paper titled “The Association of Style 7 rock art and the Martis Complex in the Northern Sierra Nevada of California,” that thoroughly examined the petroglyphs and the majority of archaeological research available at that time. In the paper, the CDF recognized that most scholars and leading authorities accepted L. Payen’s 1966 categorizations of rock art styles in Northern Sierra Nevada.

According to Payen, there are two major rock art groupings: Pit Groove and Abstract-Representational,  with each grouping divided up into multiple styles.

Style 7 is defined as: Distinctive petroglyph panels on bedrock surfaces in the higher elevations of the northern Sierra Nevada. Style 7 rock art panels are more complex and contain a greater variety of design elements than any other prehistoric rock art style in the northern Sierra Nevada region, and although considerable variation exists in design elements, there is also an underlying rigidity. Common designs include concentric circles, simple circles elaborated by line elements, wavy lines of varying complexity, tracks, and anthropomorphic-zoomorphic representations. 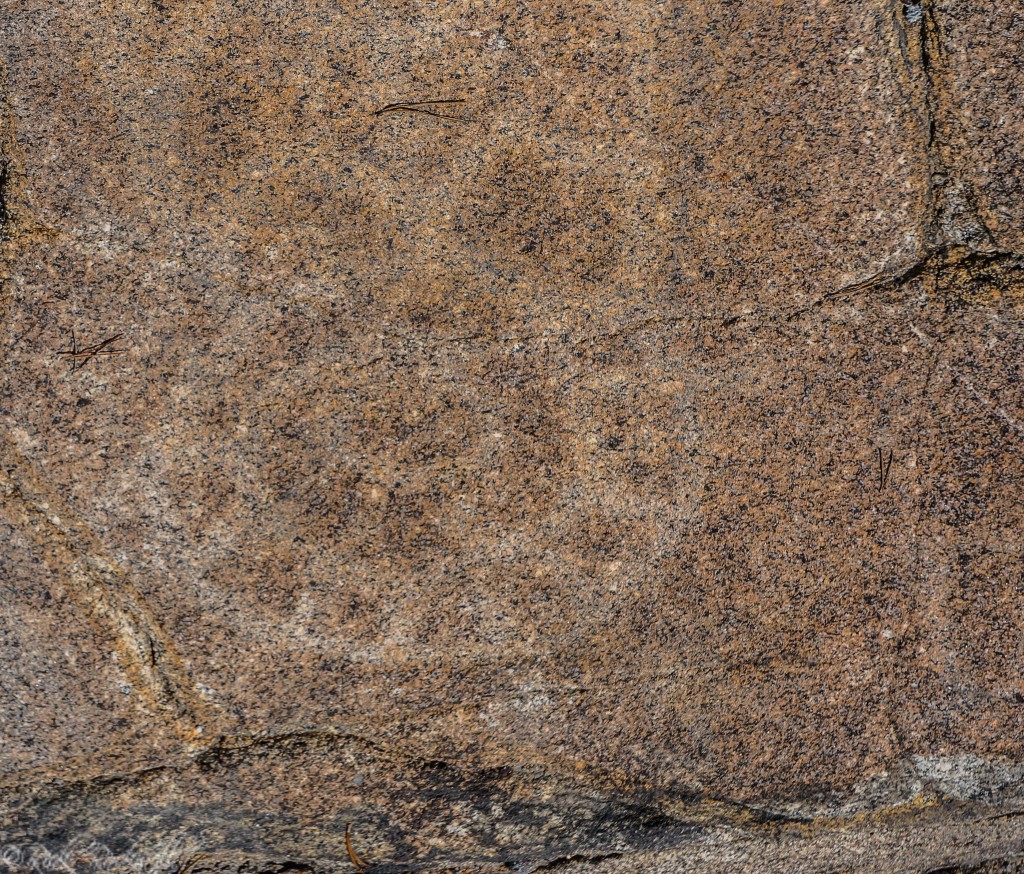 These Style 7 petroglyphs are believed to be formed by pecking on large bedrock expanses. In this region, granite was the preferred choice and the rock art was carved by a tool called a hammerstone. 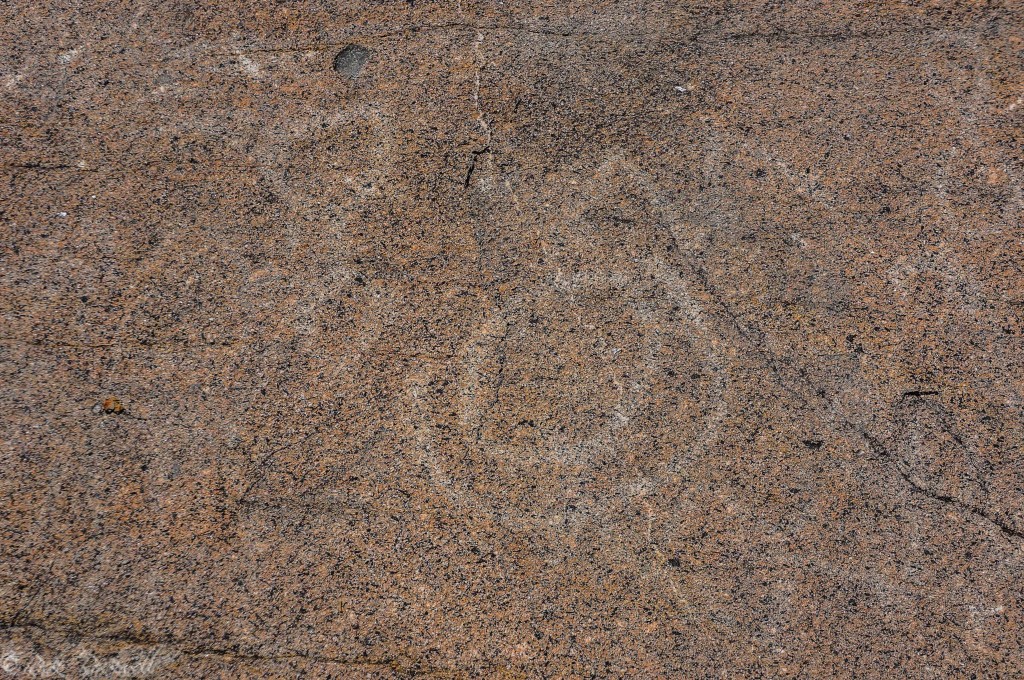 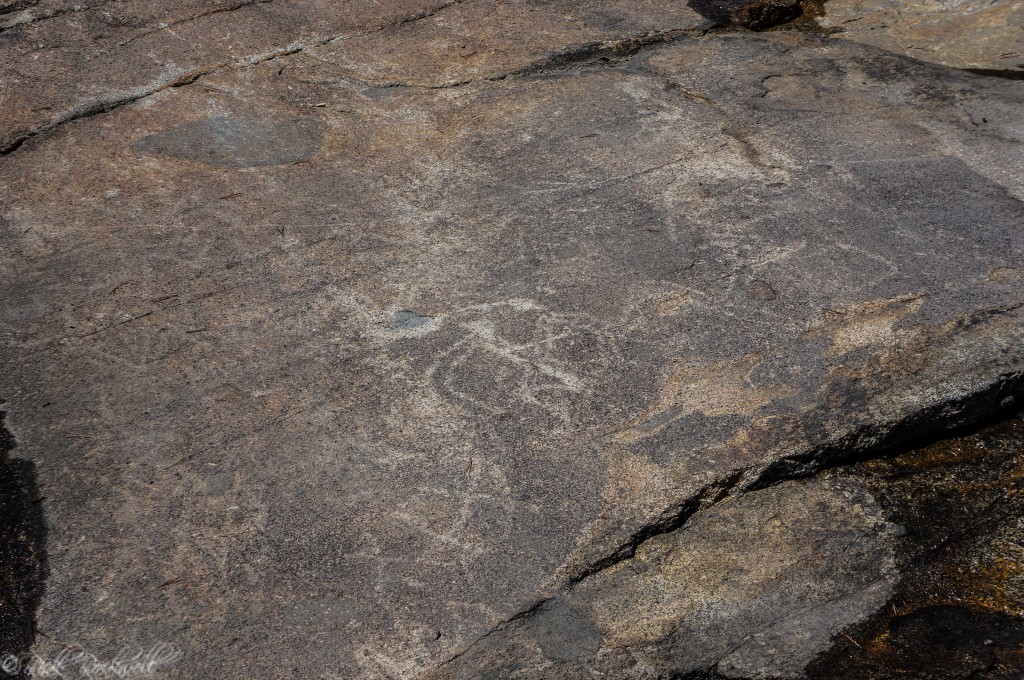 How to get to the Petroglyphs

A monument has been erected at the site of the petroglyphs. On this monument is a plaque that provides valuable details about this site and depictions of the symbols, which makes it easier to find the carvings now that you know what to look for. There are many symbols carved all around the monument on the granite bedrocks. Some of the symbols are more faded than others.

Getting to the petroglyphs is rather easy. Park at the China Wall marker parking area (directions for this parking area are below), walk west a few hundred yards (along Donner Pass Rd.) and look for the dirt path that heads toward the train tunnels above. Roughly 100 hundred yards from the road is the petroglyph site. From here, you can continue onward up to the tunnels and China Wall.

The Donner Pass Petroglyphs are a remarkable collection of rock art carvings. All efforts should be taken to preserve and protect these ancient carvings. Please do your best not to damage or deface these carvings. This petroglyph site is a terrific historical point of interest. I suggest adding it to an overall exploration of the Donner Summit area.

Once you pass through Donner and Norden, you will see the Donner Summit Bridge. A few hundred yards east of the bridge (further down DPR) is a small parking area on your right side. The China Wall historical marker is here and you can clearly see China Wall and the tunnels a few hundred feet above.