The Mare Island Naval Cemetery is a National Historic Landmark and probably the most charming little cemetery in all of California. Positioned on a hillside in the southern region of Mare Island, this two-and-a-half acre cemetery is surrounded by a white picket fence, overlooking the Napa River. At the entrance, are a variety of roses greeting you with their sweet fragrance and beauty. In the middle of the cemetery, are eucalyptus trees standing tall and proud as they cast shade over roughly 900 graves. And, within the cemetery grounds, is a historic treasure of men and women who proudly served this nation and Mare Island. 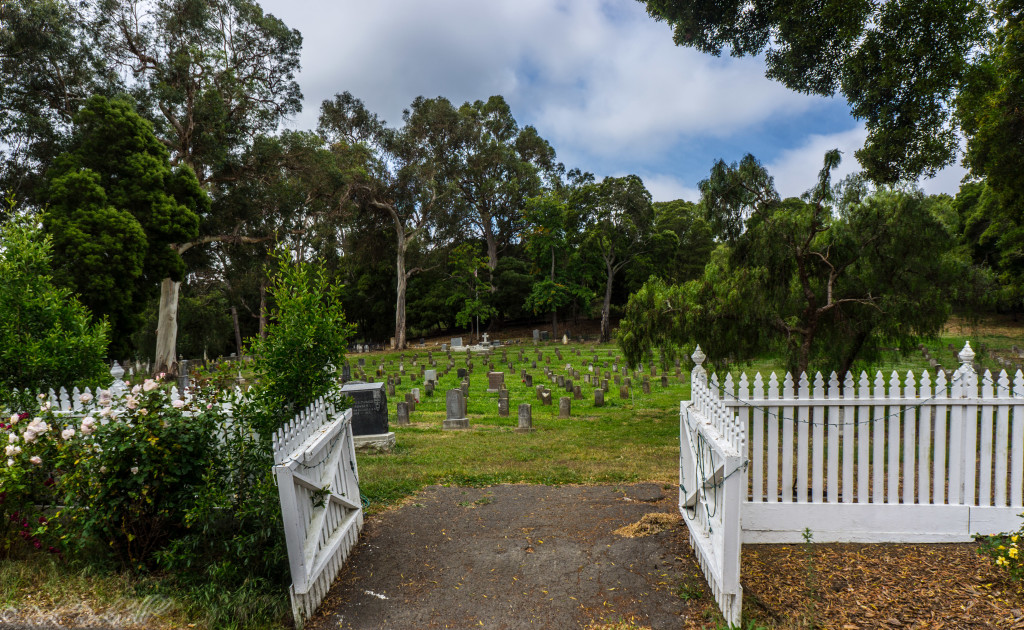 Mare Island is the oldest Naval Base on the Pacific. It was purchased by the United States on January 4, 1853, and established in 1854. By 1856, the base had created its first ship the USS Saginaw and would go on to build over 500 more ships which saw action in nearly every major war. Also by this time, a need for a cemetery arose.

The first soldier was buried at the Mare Island Cemetery in 1856. George Dowd, who died aboard the USS Massachusetts, was buried on February 12 of that year. From Dowd’s burial until 1921, the cemetery became home to over 900 members of the military, family members and even foreign servicemen.

During the early 1920’s, the Navy reportedly wanted to move the graves to a cemetery in Vallejo or the National Cemetery at the Presidio in San Francisco. However, due to costs and objections from family members, the graves remained but the cemetery was closed down. 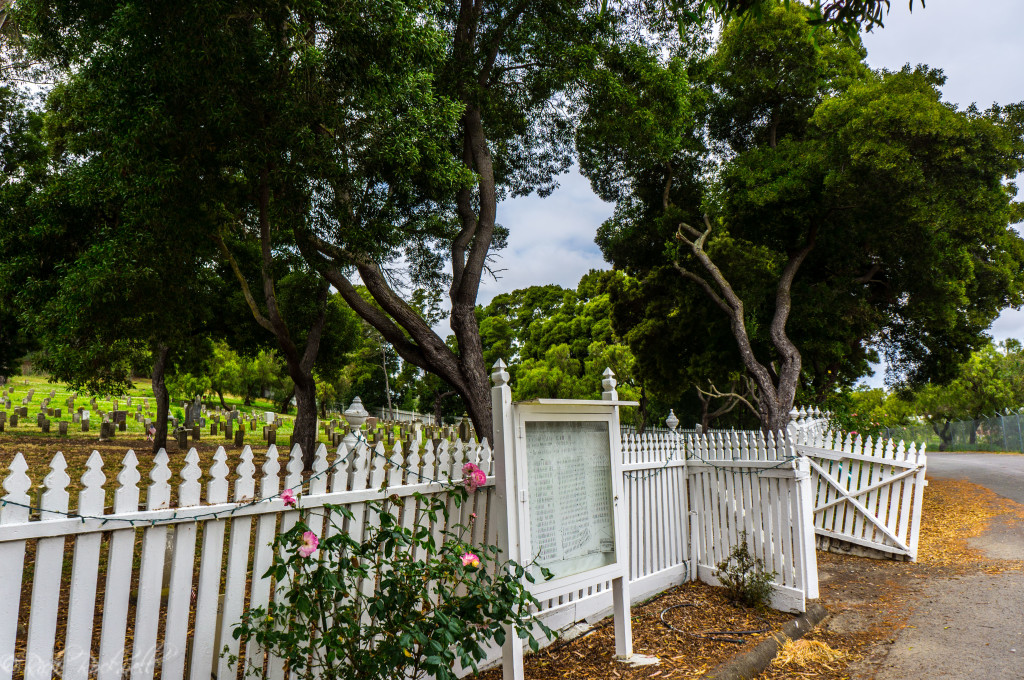 In 1975, the Mare Island Cemetery was put on the registry for National Historic Landmarks. It’s filled with Veterans who served in wars as far back as the war of 1812.

The last recorded burial was Eleanor Gibson in 1983. She lived on the island as a kid and had her ashes buried in the plot belonging to the Phelps family.

Mare Island Cemetery is the final resting place for three Medal Of Honor recipients. This award is the highest honor bestowed upon a member of the military for acts of bravery above and beyond the call of duty.

James Cooney – Born on July 27, 1860 in Limerick, Ireland, Cooney enlisted into the Marines on August 19, 1889. He saw action in the Chinese Boxer Rebellion shortly after enlistment. James, a Private in the 1st Regiment, earned this honor for the following:

“In the presence of the enemy during the battle near Tientsin, China, 13 July 1900, Cooney distinguished himself by meritorious conduct.” 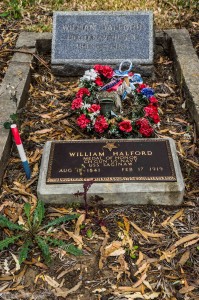 William Halford – Born on August 18, 1841 in Gloucester, England, Halford enlisted in the US Navy in 1869. He would end up serving on the USS Saginaw, which was the first ship built at Mare Island. This steam-powered sidewheeler wrecked ran aground at Ocean Island on October 29, 1870. Halford and three other volunteers set sail for Honolulu to find help. After roughly a month at sea, and witnessing the deaths of the other three, Halford made it to Kauai on December 19, 1870, and eventually to Honolulu where he found help for the stranded crew of the Saginaw. For this act of heroism, Halford earned the medal of honor.

“Halford was sole survivor of the boat’s crew sent to the Sandwich Islands for assistance after the wreck of the Saginaw, October 1870. Promoted to acting gunner”

General Orders No. 169 was issued on February 8, 1872. Halford would go on to continue his service in the Navy. He eventually earned the rank of chief gunner on March 3, 1899 and retired from the Navy on August 18, 1903, after thirty-four years of service. But his dedication to the Navy got him called back into action during World War I n July 1, 1918, at the rank of lieutenant. He served until his death on February 7, 1919, at the age of 78 years old. His grave is located in section C, row 7, plot 371.

Alexander Parker – Born August 1832 in Edinburgh, Scotland, Parker came to the United States in 1843 at the age of 11years old. He would enlist around 1853 and was a career serviceman in both the Army and the Navy. His service during the Civil War earned him the Army’s Civil War Campaign Medal.

While serving as a Boatswain’s Mate on the USS Portsmouth at Mare Island, Parker earned the US Navy Peacetime Congressional Medal of Honor for the following:

“For gallant conduct in attempting to save a shipmate from drowning at the Navy Yard, Mare Island, Calif., on 25 July 1876.”

General Orders No. 215 was issued on August, 9, 1876 and Parker received the Medal at that time. He would go on to continue his distinguished career by also serving in the Spanish American War and earning the following awards: Navy Spanish Campaign Medal, the West Indies Naval Campaign Medal, and the Navy Good Conduct Medal.

In addition to the Medal of Honor recipients, Mare Island Cemetery also has the following notable figures: 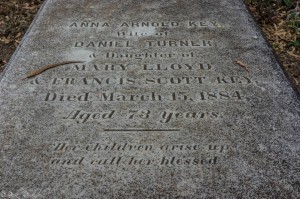 Anna Arnold Key Turner & Daniel Turner – Anna was the daughter of Francis Scott Key who created The Star Spangled Banner, the National Anthem. Her husband Daniel was the base’s first engineer and a former congressman.

Adam Armstrong McAlister – He was the first Chaplain and responsible for the erection of the St. Peter’s Chapel. You can read more about him in my article: St. Peter’s Chapel: the oldest Naval chapel in the United States 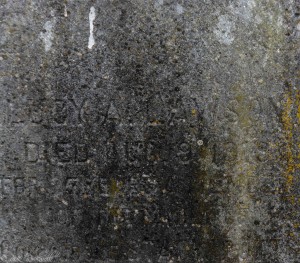 Lucy Lawson – Her notoriety is due to being a convicted murderer of her husband. She was eventually pardoned, due to an unreliable witness, and made her way to Mare Island and became a nurse and a housekeeper.

David Oldham Lewis – A Medical Inspector and Fleet Surgeon for the US Pacific Squadron. He aiding in saving sailors from the USS Boston due to an explosion at the Naval Ammunition Depot on June 13, 1892. There’s a large monument in the cemetery dedicated to the 15 sailors who died during this accident. 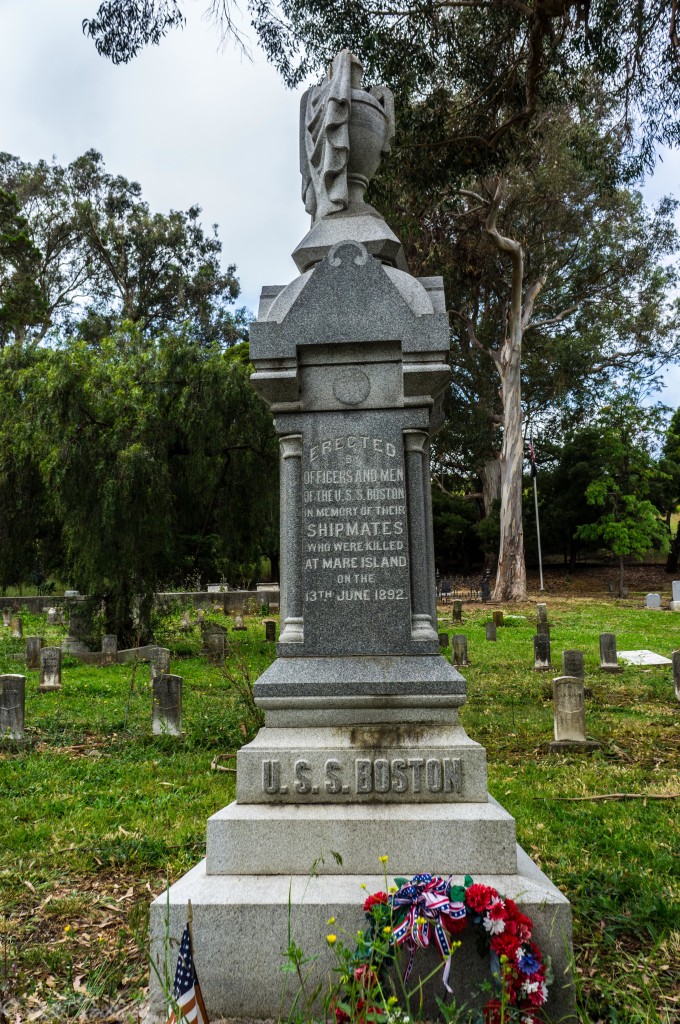 From Russia With Love

In late 2010, the Russian Consulate set out to repair and replace tombstones for six Russian sailors buried in the Mare Island cemetery. A. Trapeznikov, K. Kort, Y. Bootorin and three unidentified Russian sailors perished while trying to put out a fire in San Francisco during the fall of 1863.

Unfortunately, without advanced notice and approval, the Consulate removed the 150 year old faded tombstones and replaced them with beautiful crosses. Sadly, their act of tribute caused a great deal of controversy as they weren’t legally allowed to do this. Because the cemetery is a protected national historic landmark, there are strict guidelines for the removal and repair of markers. These guidelines are set by the U.S. Department of the Interior. 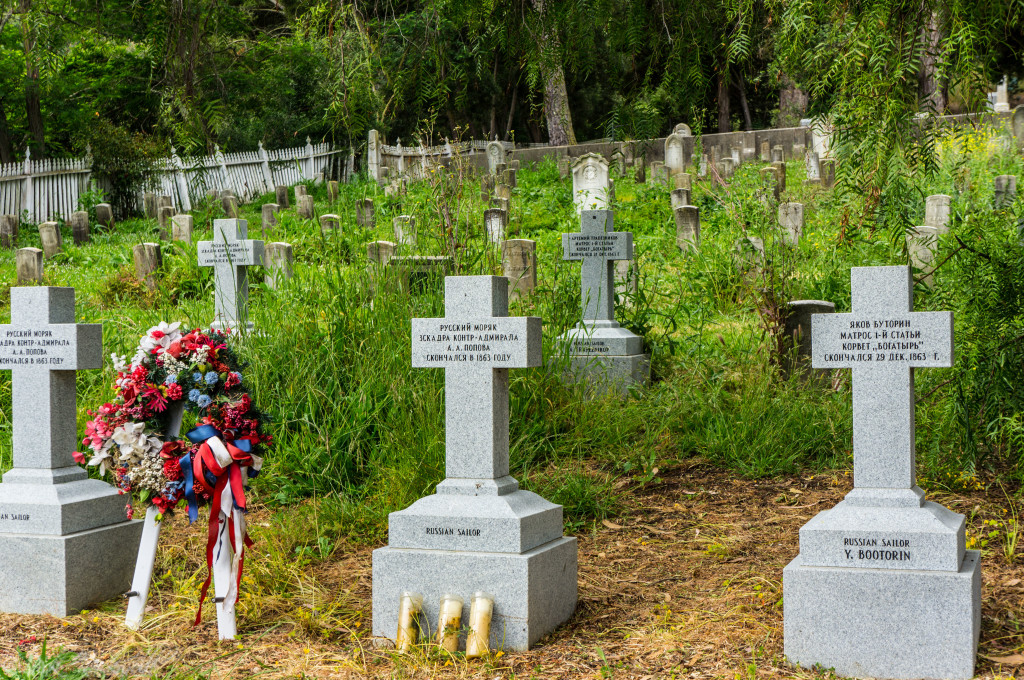 I can see both sides of this argument. For me, I think the crosses add to the overall visual appeal of the cemetery even if they don’t match other markers. However, I certainly would not like to see anymore removal or replacements of markers in this cemetery. You can read an in-depth report about this incident by clicking here.

Heading to the cemetery, I felt a growing somberness within me. I’m not one who gets excited when visiting cemeteries. I love the history behind the men and women buried there, but it’s still a cemetery and not a museum. However, visiting the Mare Island Naval Cemetery was an entirely different experience. That somberness was replaced with pride as I saw all of these men who proudly served to protect this country. The cemetery itself was quaint, quiet and had a peaceful view of the river. If I had to imagine what I would want a cemetery to look like, the Mare Island Naval Cemetery is how I would picture it.

This cemetery is currently cared for by the Mare Island Shoreline Heritage Preserve. For more information on their efforts click here. The preserve is open Fridays through Sundays 10am to one hour past sunset. You can view the cemetery during these hours. Leave a tip and support their efforts.

Check out more of my Mare Island adventures. 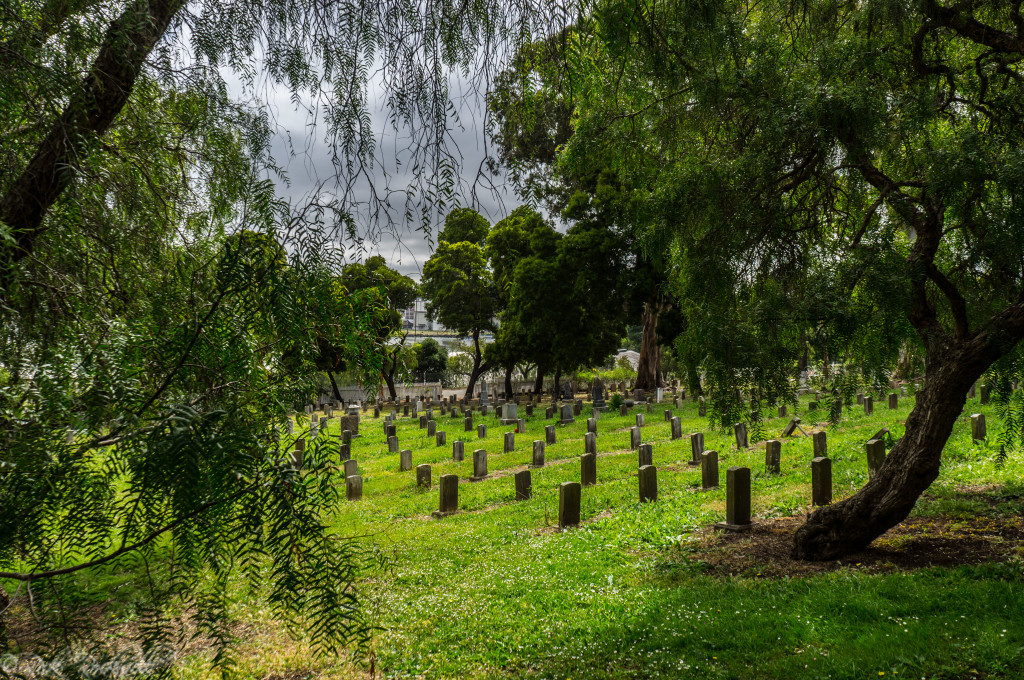 From I-80 – head toward Vallejo and exit on Tennessee St. Cross over the Mare Island Causeway and make a left at the flashing red light, which is Railroad Ave. Take this all the way down, past the waterfront, military buildings until it ends at the Preserve’s entrance. 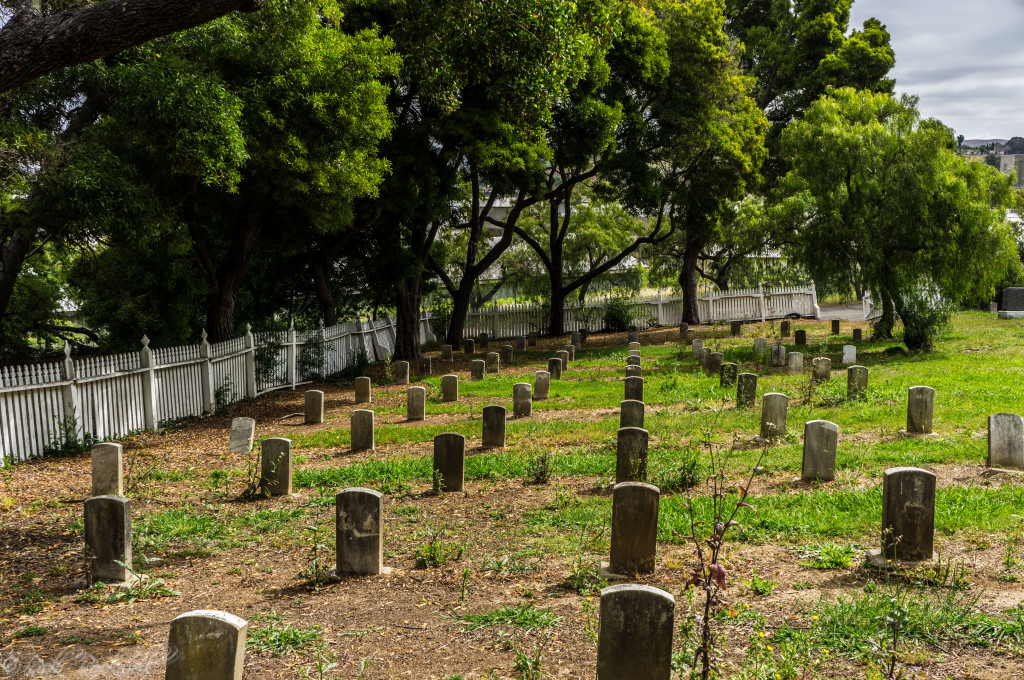 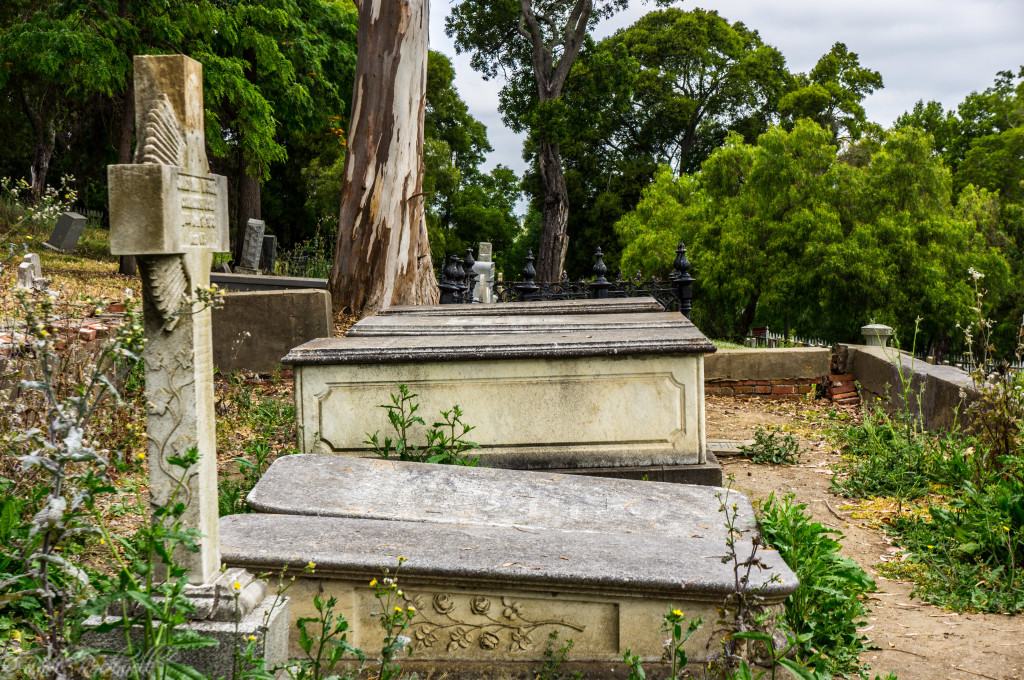