Positioned on a narrow peninsula of land along the Mendocino Coast, is the Pacific’s tallest lighthouse – the Point Arena Lighthouse. At 115 feet in height, this lighthouse provides priceless views of California’s northern coast and an opportunity for visitors to experience a more charming period in time.

In 1866, due to increased shipwrecks off the coast of Mendocino, the United States Lighthouse Service decided that a lighthouse was needed at Point Arena. Construction began in 1869, with the original lighthouse opening in 1870. An excerpt from the Annual Report of the Lighthouse Board in 1869, made the following statements about the initial construction:

“On July 30th, …the workmen with all the necessary tools, together with a quantity of cement and lime, reached the Point. The excavations for the foundations of the tower, oil-house, and dwelling were commenced the next day and finished during the month of August; derricks were erected to hoist stones from the beach, sand was hauled, stones for concrete broken, and the concrete foundations laid, and a flume to conduct water to the site constructed.”

Over the next few decades, modifications were made to upgrade the lighthouse and fog stations. However, in 1896, the original fog signal building had to be moved a few hundred feet inward due to the erosion of land. 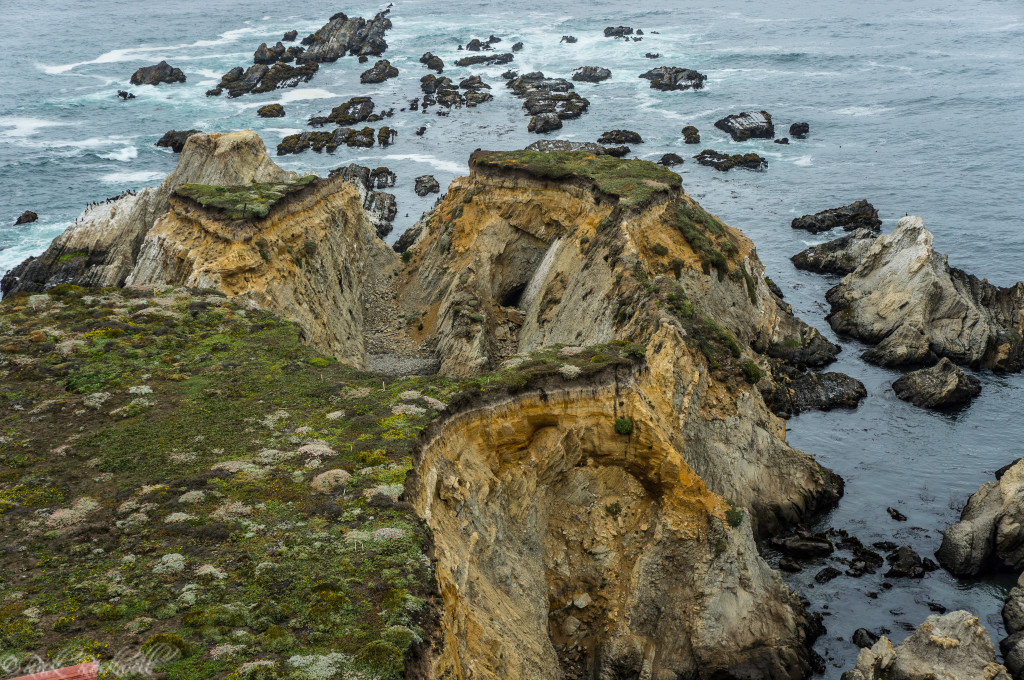 In 1906, the devastating earthquake in San Francisco destroyed the original lighthouse. According to Ligthousefriends.com, a lighthouse keeper made the following firsthand report:

“A heavy blow struck the tower from the south. The blow came quick and heavy, accompanied by a heavy report. The tower quivered for a few seconds, went far over to the north, came back, and then swung north again, repeating this several times. Immediately after came rapid and violent vibrations, rending the tower apart, the sections grinding and grating upon each other; while the lenses, reflectors, etc., in the lantern were shaken from their settings and fell in a shower upon the iron floor.”

Within roughly 18 months, a new lighthouse had been constructed. Standing 115 feet tall, this new tower was made out of reinforced concrete and began operating on September 15, 1908. The original staircase from the first lighthouse was reassembled and placed in this newer one.

Another significant historical moment at Point Arena Lighthouse came during 1941 when the United States had entered World War II. Lighthouse keeper Bill Owens reported seeing a submarine out in the ocean a few days after the attack on Pearl Harbor. Unfortunately, his report wasn’t taken seriously. A few days later, a lumber schooner Amelia was torpedoed by a Japanese sub just north of Fort Bragg, according to the book Point Arena Lighthouse by Merita S. Whitely. Also within two weeks of Owens’ report, the SS Montebello oil tanker was sunk by a Japanese sub off the coast of a small Southern California town – Cambria.

The Point Arena Lighthouse is a registered Historic Landmark for California. Additionally, in 1989, it was added to the National Register of Historic Places.

The Point Arena Lighthouse featured a 1st Order Fresnel Lens which could be seen up to 25 nautical miles away. This lens, and it’s beautiful brass craftsmanship, was created in France. The lens weighed more than 6 tons and is roughly six feet in diameter. Currently, the lens can be seen in the museum which is positioned next door to the tower. 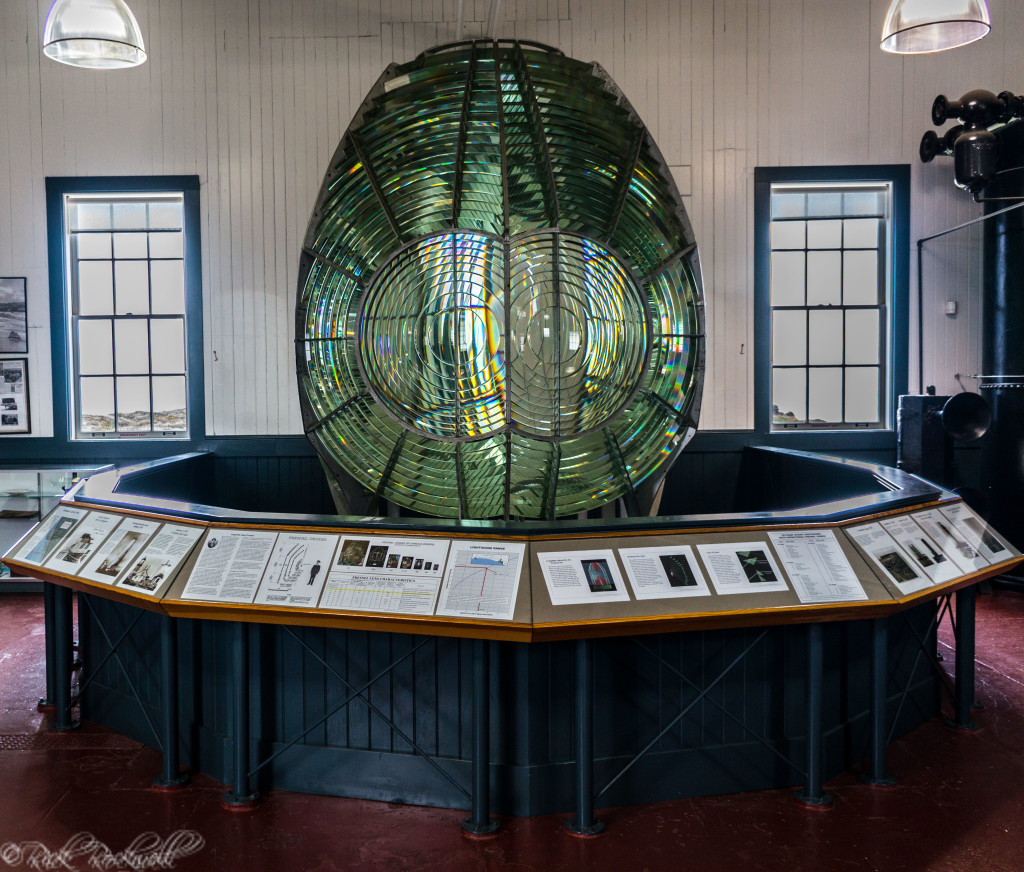 From Highway 1, the road winds roughly two miles along the coast. With each hundred yards, it seems as if you are traveling another decade back in time. The scenic landscape hasn’t changed much in well over a century. A white picket fence surrounds the acreage of land on the peninsula. Inside the fenced area is the larger lighthouse tower, the fog signal building that now houses the museum, and several ranch style cottages for vacation rentals. The ocean is to the west and farmlands are to the east. It’s reminiscent of a simpler time, a more charming era. 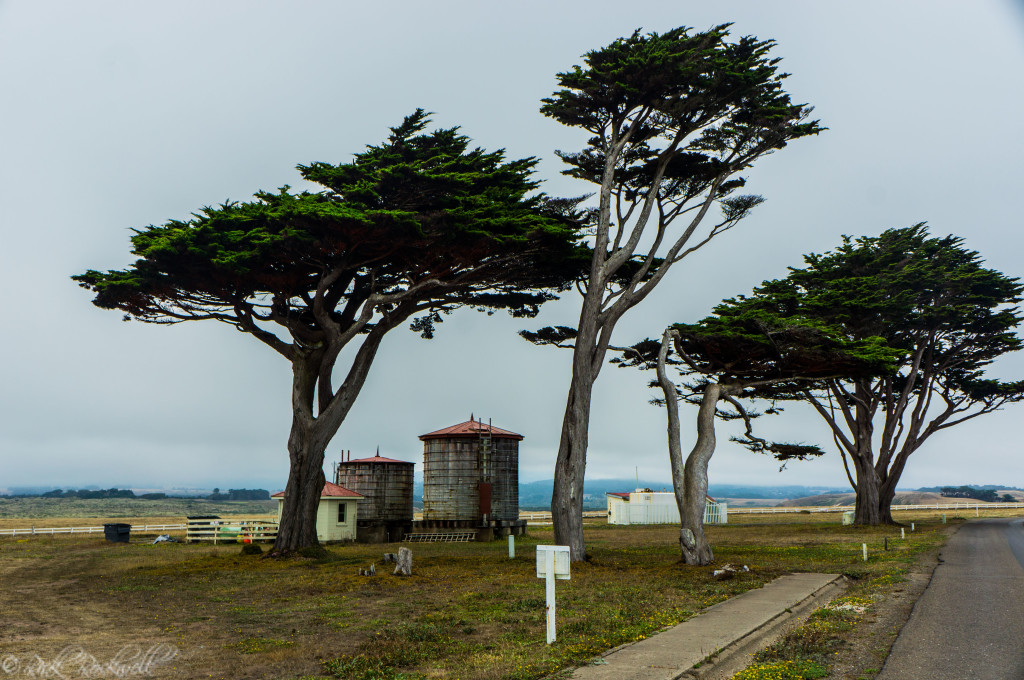 In 1984, the Point Arena Lighthouse Keepers received a 25 year lease to the lighthouse and the acreage of land that it sits on. In 2000, the non-profit group obtained ownership. One of the main objectives of this group is to preserve the lighthouse’s history. A museum was opened in the old fog signal building and is a hub of historical information for the lighthouse and Mendocino County.

The museum and lighthouse are open from 10am to 3:30pm daily. From Memorial Day to Labor Day it’s open until 4:30pm. Tours of the lighthouse cost $7.50 per person.

For more on the Point Arena Lighthouse Keepers and the museum, check out their official website. 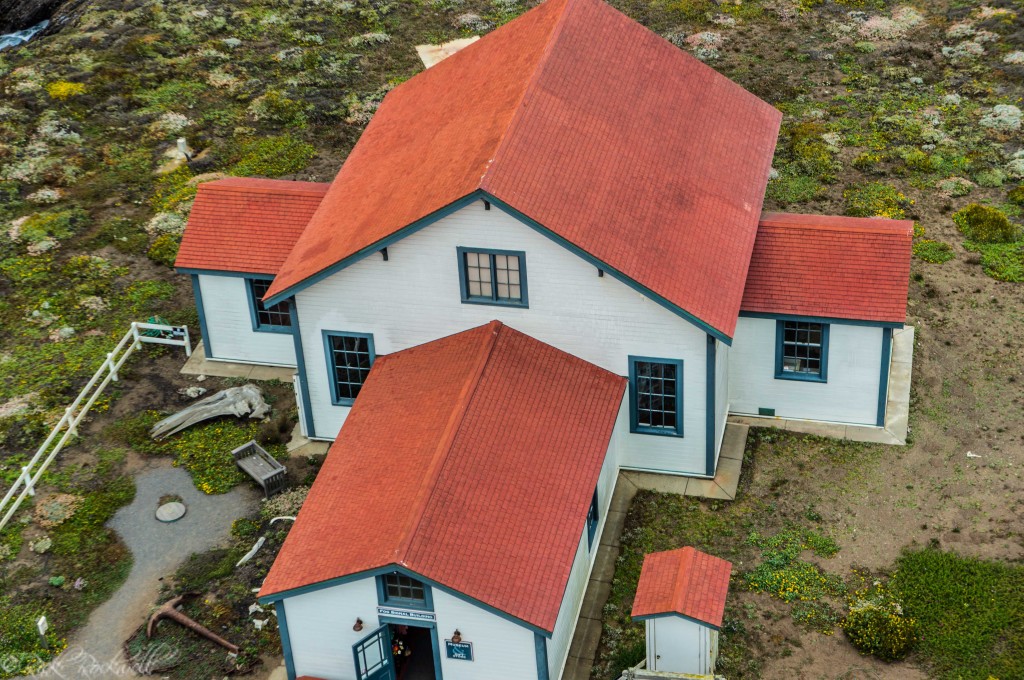 Lighthouse tours require advanced purchase in the museum. A docent will lead the tour once the previous tour has been completed. The docent’s are very knowledgeable and do a great job teaching about the history of the lighthouse and the Mendocino Coast.

The tour begins outside of the tower, enters the large room on the ground floor and then ascends up 145 steps until you get to the room that used to house the large Fresnel Lens. On the way up the stairs, there are windows to look out, one flat level about half way up the tower for visitors to rest, and another deck that takes you outside around the lighthouse tower just below the lens room.

Pace yourself as you climb up the steps. The eagerness of many had them sucking wind half way up the stairs. 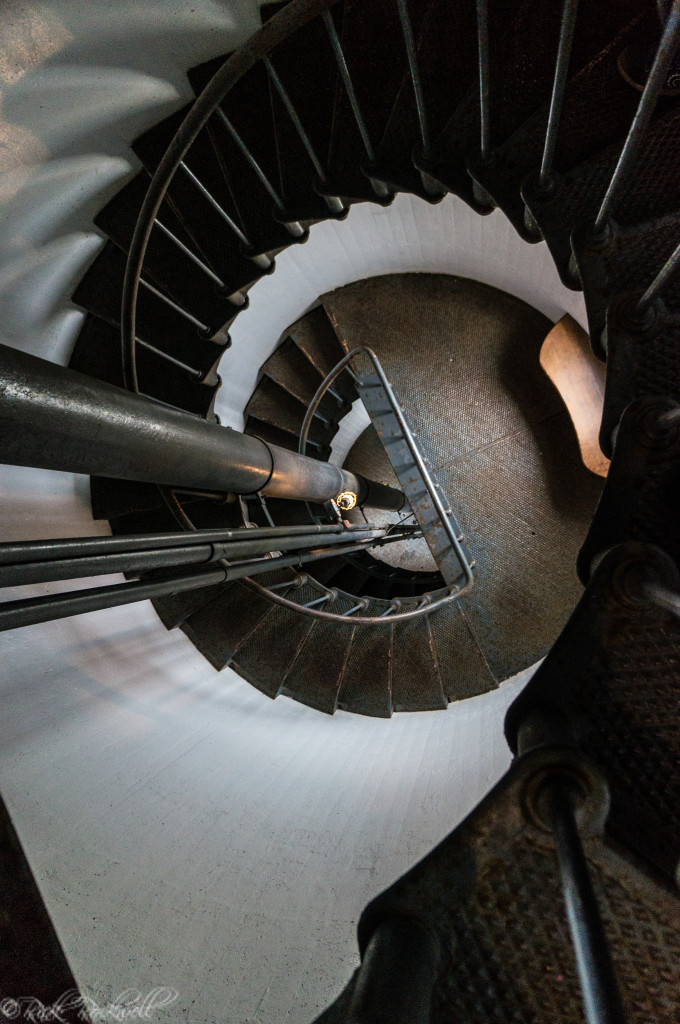 Once in the lens room, the views are incredible. A clear sightline for miles. The coastal land and the Pacific ocean make you forget all about the torture of climbing those stairs. However, it can get pretty crammed in the lens room if you are with a large tour group. After, the docent finishes his lesson on the Fresnel Lens and how far the light beams reached, you are allowed to roam around the lighthouse at your own pace. However, you can’t go outside onto the outer walkway that surrounds the lens room. It’s closed off for safety purposes.

Once you have completed the tour in the lighthouse tower, the museum and the rest of the grounds are perfect opportunities to soak up more of the Point Arena experience.

Ever since I was a little kid, I have been enamored with lighthouses. I also loved the movie Pete’s Dragon and was jealous of how Pete went to live in a lighthouse with Nora and Lampie. I spent most of my childhood dreaming of living in a lighthouse and having my every own dragon. So, there’s always a little extra childhood exuberance when I visit any of California’s lighthouses.

Point Arena Lighthouse has been a place that I’ve waited a long time to see. And to be honest, it was better than I could have imagined. It’s charming landscape, priceless coastal views, and long journey to the top of the tower were everything that I hoped they would be and more.

If you want to make a weekend out of your visit to this stunning lighthouse, the keepers’ houses, now ranch-style homes, can be rented out for lodging.

From Highway 1 (Shoreline Highway) turn onto Lighthouse Rd. and follow this for roughly 2 miles along the coastline to the lighthouse entrance.