The Mills Peak Fire Lookout is an active lookout located in Plumas National Forest and the Lakes Basin Recreation Area at an elevation of 7,300 feet. This lookout provides spectacular views of both Plumas and Sierra Counties, is staffed around the clock during fire season, and can be accessed by vehicles, mountain bikes, or on foot. 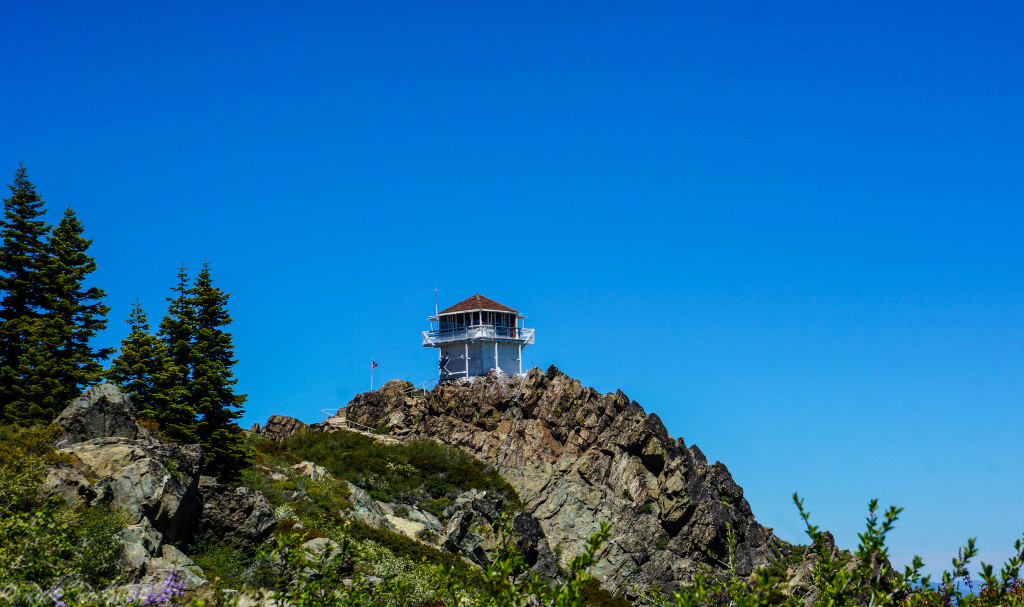 There are conflicting reports as to when the fire lookout was first built. The USDA says it was built in 1932, while the National Historic Lookout Register (NHLR) says it was built in 1933. This would also leave open for debate as to whether California’s Department of Forestry built the tower or if the Civilian Conservation Corps (CCC) built it. The CCC was formed in 1933 by President FDR and was responsible for building hundreds of fire lookouts across the nation.

The NHLR states that the first Mills Peak Fire Lookout was an L-4 ground house. The L-4 was arguably the most popular style of live-in lookouts. There were three generations of these lookouts: 1929-1932, 1933-1935, and 1936-1952. Each generation had slight modifications to improve the lookout’s stability and structure.

The L-4 style consists of a 14×14 foot wood frame cab with windows all around, according to Firelookout.org. These lookouts provided clear and stunning views in all directions. 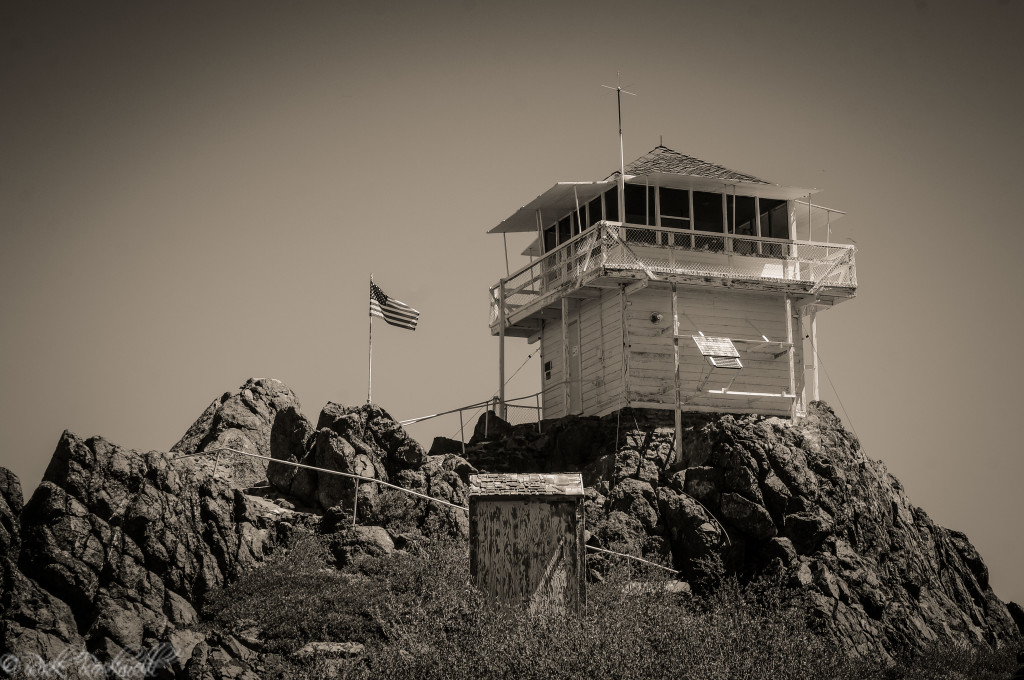 It’s entirely possible that an original one was built in 1932 on the ground, but then the CCC came in and remodeled it as they did to numerous other fire lookouts through California. See my article on the Angora Fire Lookout for a perfect example of how the CCC came in and built a new structure around 1934. 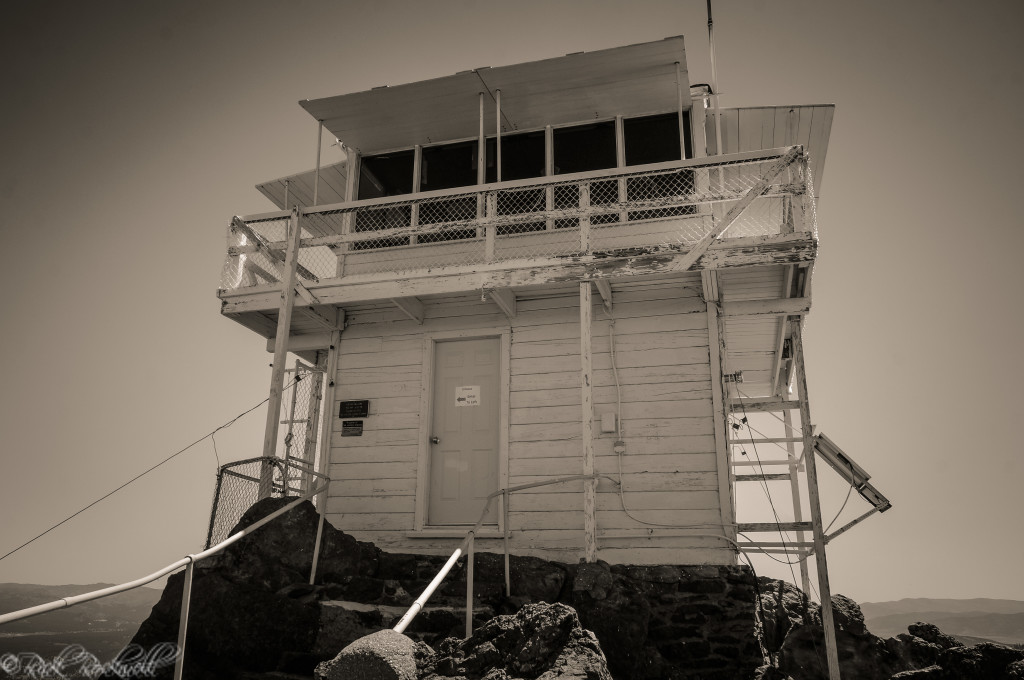 At some point, the tower was deactivated. Historically, many of the lookouts in California were deactivated by 1970 due to an advancement in technology. The Mills Peak Fire Lookout was reactivated in 2005, and restored with some modern upgrades, according to the NHLR. When arriving at the lookout, there are steps leading up to the tower, then a set of narrow stairs on the left side to walk up to the main platform and around the tower. You will also be able to enter inside the tower from here.

During fire season, visitors can enter inside the tower and get a 360 degree view of the region. In fact, these views are really worth experiencing in person. Additionally, the staff are very friendly, inviting and informative. Talking with them adds to the overall experience as they share some history, talk about the responsibilities of the tower, and help to point out various landmarks in the spectacular views.

Parking is limited with a small, dirt parking area a few hundred yards west of the tower. Additionally, the last ¼ mile of the road is probably the most intense portion of the drive as the narrow road runs right along the cliffs.

Mills Peak Trail is one of the most popular mountain biking trails in the region. It’s an adventurous ride that takes you through the forest and up to the lookout. The trail is roughly 7 miles one way. Some riders prefer to take the trail up and back down. Others prefer hitching a ride up to the lookout and then soaring down the mountain.

The trail is rated moderate, but does require some experience and technical skills. It takes about 90-120 minutes to complete depending on your starting point. Additionally, depending on where you start, you can gain/drop a few thousand feet in elevation.

The Mills Fire Lookout provides stunning views of Plumas and Sierra counties with Mt. Lassen off in the distance. Although the journey to the lookout can be a bit daunting, especially for beginners, it’s well worth the effort. I suggest a high clearance vehicle due to the three miles of rough roads cutting through the forest. I’d like to thank my friends over at Gold County Explorers for introducing me to this lookout.

I suggest adding this lookout to an exploration of Frazier Falls for a wonderful Lakes Basin Rec Area experience. If you have more time, check out some of the nearby lakes. This area has almost two dozen of them to enjoy.

Getting to the Mills Peak Fire Lookout takes some patience and concentration. Whether coming from Highway 89 or Highway 49, the goal is turn onto Gold Lake Highway (GLH). Since I came from Highway 49, my directions are for this route.

From the junction of 49 and GLH, at Bassetts, drive roughly 6 miles and turn right onto Church Meadow Road. There isn’t a clear sign for this road off GLH. Keep an eye on the mileage and be alert as you approach Gold Lake on the left side.

Head down this road for roughly 1 mile before seeing the following sign to turn left onto Mills Peak Road. 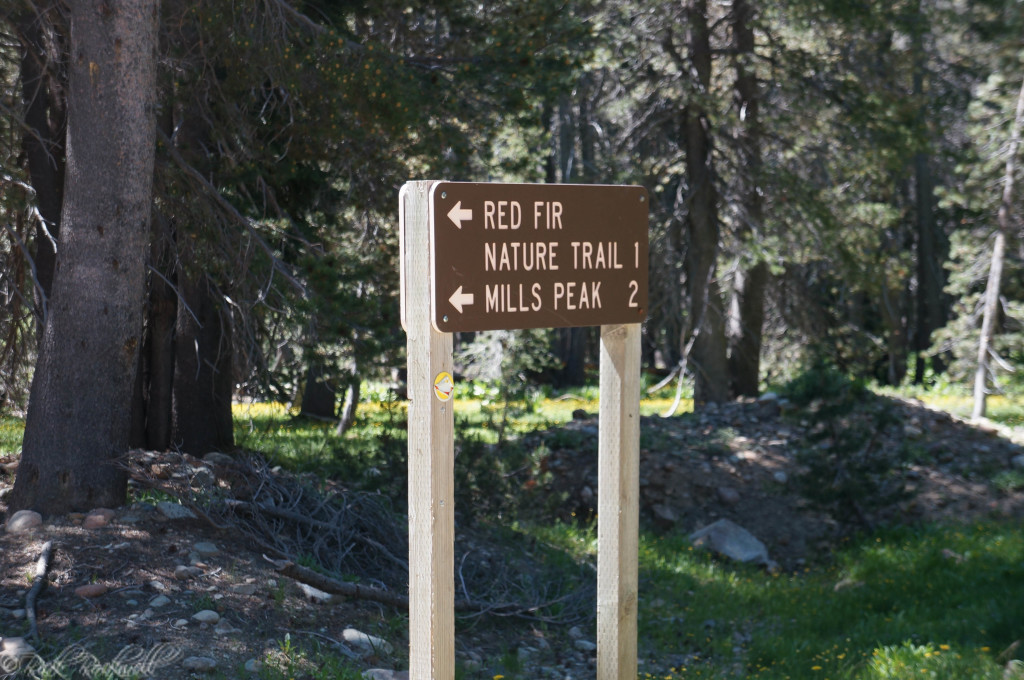 From here, you will drive 2 miles on a narrow, bumpy road that will require cars to pull over for oncoming traffic to pass. This is the road that will eventually take you alongside the cliffs before arriving at the Lookout.