According to local lore, in 1851, after three miners discovered gold nuggets on the San Juan Ridge, one of the miners bragged about the findings at a local saloon and was unknowingly followed by other prospectors to the discovery site. Unfortunately for the followers, they didn’t find any gold and in disgust, named the creek Humbug due to their wasted trip.

Over the next two years, after hundreds of miners flooded the region, a mining camp expanded into a town which was appropriately named Humbug. This town rapidly grew with the advent of hydraulic mining, which uses water to wash away mountainsides in search of gold. By 1857, the town chose Bloomfield as the new name. Unfortunately, this name was already taken and they quickly settled on North Bloomfield. 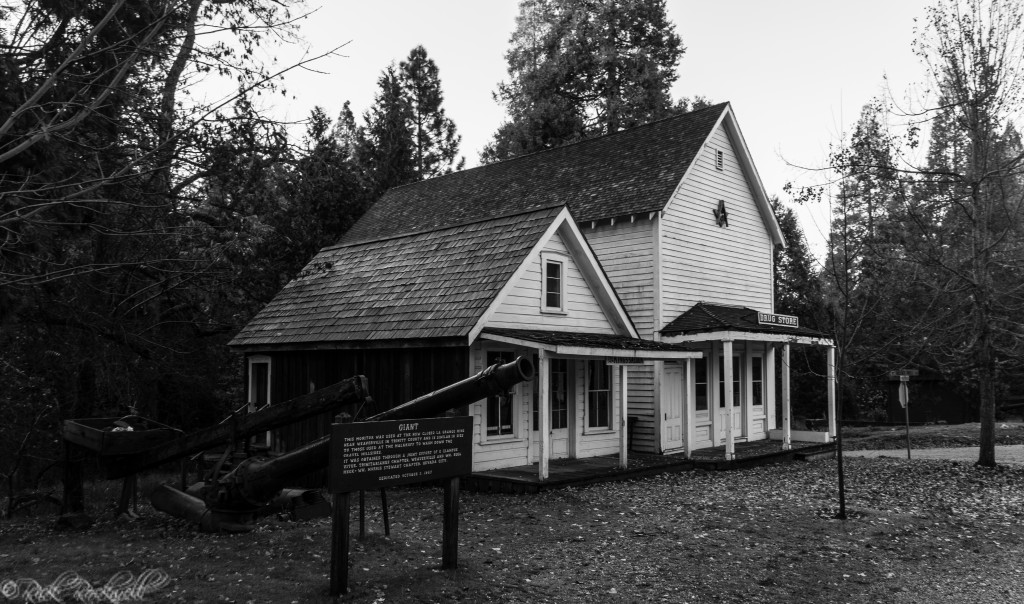 By the late 1870’s and into the early 1880’s, the town grew to roughly 2,000 residents which included a Chinese settlement. According to Malakoff.com, the town boasted of 8 saloons, five hotels, three lodging houses, multiple grocery and dry good stores, a few breweries, stables, a church, a school,  blacksmith, butcher and barbershop.

However, due to the environmental disasters that hydraulic mining was causing, the government made it illegal in 1884 after Sacramento Valley farmers successfully sued the mining company. Soon after the hydraulic mining stopped, miners and their families departed for more promising regions.

Today, there are a few original buildings still standing, some buildings reconstructed like the mining era and plenty of exhibits within these buildings that tell the tale of town long ago.

It’s quite the drive just getting to North Bloomfield. But, once you arrive, you quickly realize that it’s worth the drive. I reached town just prior to 7:30 am on the day before Thanksgiving. There wasn’t a soul around and I couldn’t help but flashback to the opening scenes of the series premiere of The Walking Dead where Rick is walking down the empty streets. This town isn’t bigger than two blocks, but, it’s charmingly eerie as you stroll down the main street with history surrounding you on both sides.

Check out my article on Malakoff Diggins State Park for more details, directions and photos

The first few buildings are mining era homes with some of them being originals. As I passed each home, I couldn’t help but look for life forms moving within. It’s like all of your senses tell you that people should be there, but the reality of nobody being there causes a conflict within your brain. I equate it to driving on the wrong side of the road.

As I made my way down the street, I came across some of the main buildings like the museum, barbershop and general store. These buildings tell the tales of a once bustling town. They also add to the ghost town aura. All the buildings looked in great shape for their age.

About 45 minutes into my stroll down main street (North Bloomfield Rd.) a park ranger drove by and had a perplexed look on her face. A few minutes later, a local resident (which I was shocked that there was one) stopped by and struck up a conversation  with me. His name was Tom and he shared with me some details about the structures, the town and the people. According to Tom, there are 6 fulltime residents and that this little town still has a faint pulse.

Tom told me about the recent history, when the state came in and preserved the town/park and much more. Eventually, the park ranger came back by and joined in on the conversation. These encounters add to the overall success and enjoyment of an adventure. They provide details and connections to a place that is foreign. They humanize the past and make the future exploration even more exciting.

Tom shared with me how it’s best to take North Bloomfield Rd. out of town and not into town due to the challenges that the road provides. Additionally, he spoke about the best places to hike and sightsee within the park. I tried to get him to go hiking with me but to no avail. However, Tom did convince me to return around Memorial Day to see the town tours, inside the buildings and to enjoy the prime period for hiking. After speaking with Tom and the park ranger for a while, I decided to hit the road.

On the way out of town is the church, the old school and the cemetery. I can’t wait to go back to go inside the old church and a few of the other buildings. Additionally, there’s a parade in town that’s arguably the world’s smallest parade. According to the park ranger, it boasts of 3 floats.

North Bloomfield is a pleasant trip back into the mining era of this state. A period of time where life was simpler and everything was centered on the success of the Malakoff mine. The structures provide a peek into what the town in its heyday would have looked like. The rest of the park, which you can read about here, provides some great trails, beautiful scenery and an enjoyable journey through the old hydraulic mining area. I definitely plan on heading back here and I recommend that if you are anywhere near Nevada City in the future, that you go and check out Malakoff Diggins State Park.