Alden Park, located on Mare Island, is quite possibly the most unique little park I have ever seen. It’s overall landscape is well maintained with a bandstand in the middle. A variety of large trees provide shaded areas for picnics and the park benches present visitors with an opportunity to sit and enjoy a pleasant day outdoors. Overall, it’s a lovely park setting, ideal for any small town in America.

Did I forget to mention that there’s a giant Polaris missile, 19th century cannons and a WW II German Marder submarine also in the park?

In 1854, the United States sent Commander David G. Farragut to oversee and build a Naval base on Mare Island. The layout of the naval yard was designed by W.P. Sanger, a Navy civil engineer. In his initial plans, Sanger marked out a space for a park which was initially called “Park Platt.”

The first feature added to the park was the flagpole. According to the Mare Island Cultural Landscape Report, the flag was raised on October 3, 1854. It still remains in the same location to this very day.

The park didn’t really experience any significant growth until 1868 when Commodore James Alden, the Naval Commander who the park is named after, began his “tree planting” effort. Alden, who served as Mare Island’s Commandant from 1868 to 1869, had a long and distinguished career in the U.S. Navy.

Many historians consider this period to be the commencement point for Alden Park.

Born on March 31, 1810, in Portland, Maine, Alden entered the Navy as a midshipman in 1828. His distinguished career saw a steady ascension through the ranks. He served in the World Exploration Expedition in the late 1830’s, saw action in the Mexican War, and even spent time surveying most of the country’s west coast. Alden was an integral part in Navy efforts during the Civil War before being assigned under the command of David G. Farragut, who ended up establishing Mare Island in 1854.

He was promoted to captain in the early 1860’s before finally reaching the rank of Commodore in 1866. After his tenure at Mare Island, he would become Rear Admiral.  Alden died on February 6, 1877, in San Francisco. 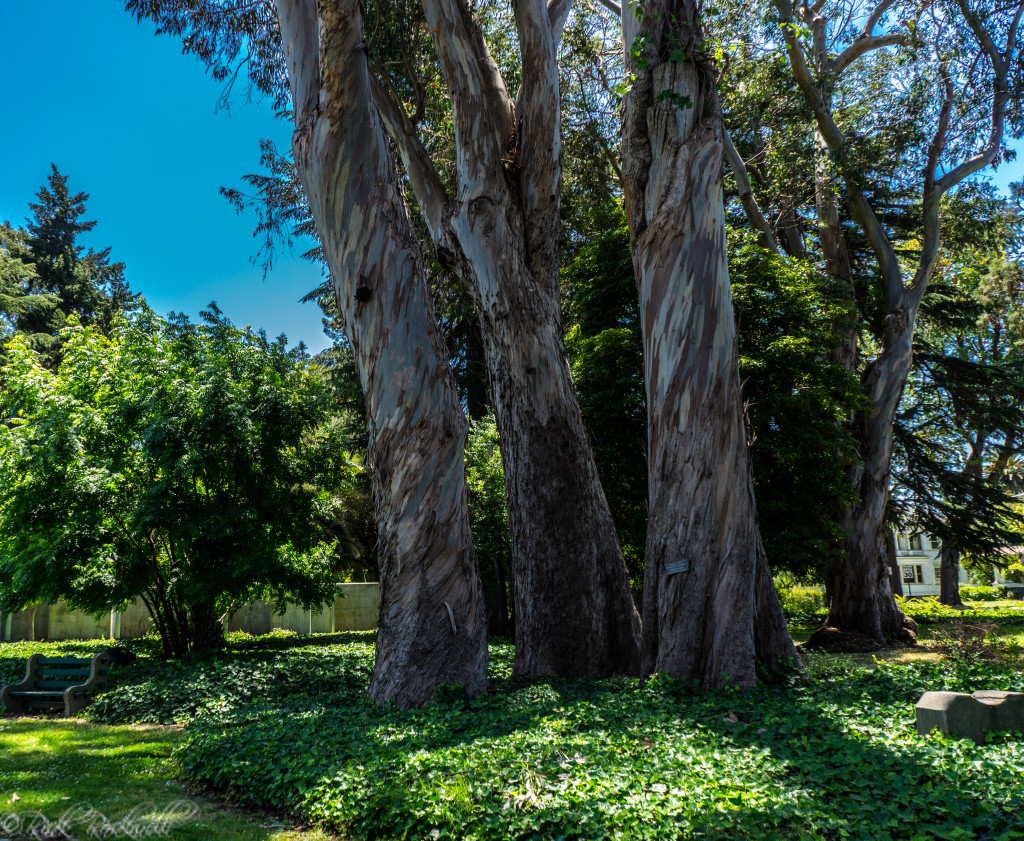 Mare Island originally had no trees. In fact, neither did Vallejo or much of Solano County. Commodore Alden encouraged captains to bring back trees from their missions around the world. In total, roughly three dozen different types of trees were brought back to the Naval Base. There are trees from Australia, South America and New Zealand in addition to those that were brought over from the East Coast. Some of the trees brought over were: elms, almond, apple, bay, olive, apricot, willow, locust, fig and eucalyptus.

Many of the Island’s various trees can be seen in Alden Park; with some of them being over 100-years old.

The bandstand is located at the center of the park and is the main feature. It dates back to 1895 and really punctuates the park’s “All American” old fashioned setting. If it weren’t for the military firepower, this park would be the perfect setting for a 1940’s film or an episode of a 1950’s television show like Leave it to Beaver. 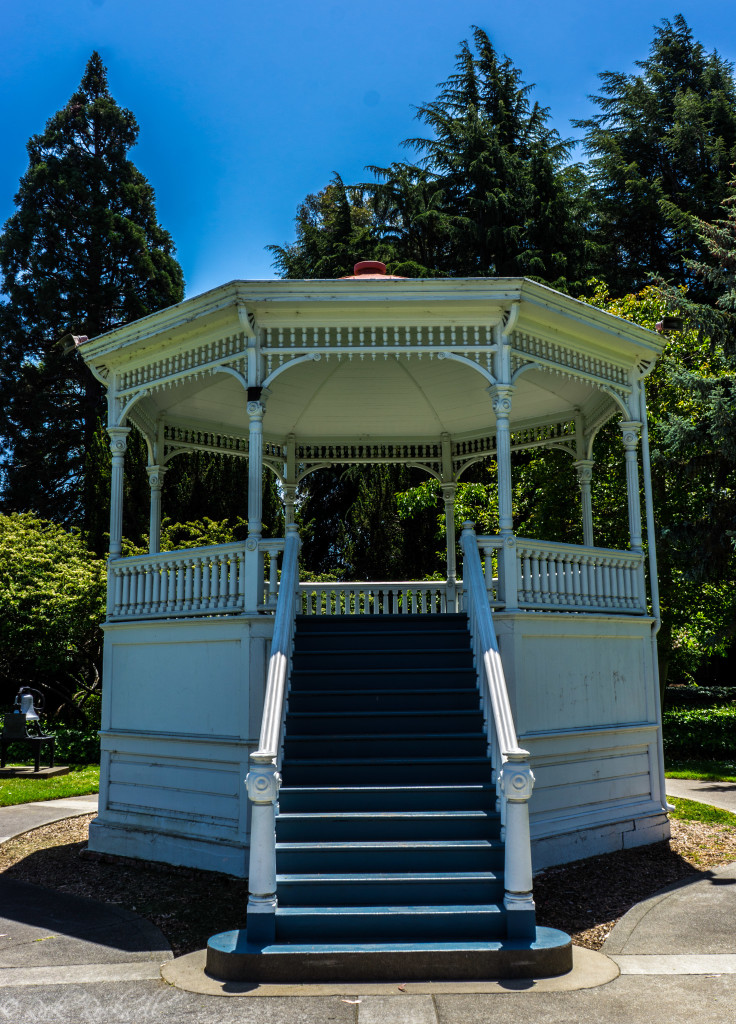 Today’s version of Alden Park can be directly traced back to the changes made in 1936. The bandstand and flagpole remained in the same positions, but the historical weapons were moved away from the flagpole, more toward the outer border of the park. Another major change was the addition of a sidewalk that encircles the flagpole and all the way around the bandstand.

This is where the old fashioned park goes from picture perfect to slightly bizarre.  One can only guess as to why the ‘powers that be’ thought it was a good idea to line the park with antique military weapons. My theory – since this park was a central location for gatherings, it became a living shrine to the military battles and the servicemen who gave their lives.

With that being said, here’s the antique firepower found in Alden Park:

Spar Torpedo: There are two of these spar torpedoes in the park. They both date back to the Civil War era. A spar torpedo was placed at the end of a long pole and attached to a boat, which would use this weapon like a javelin to ram into other ships. 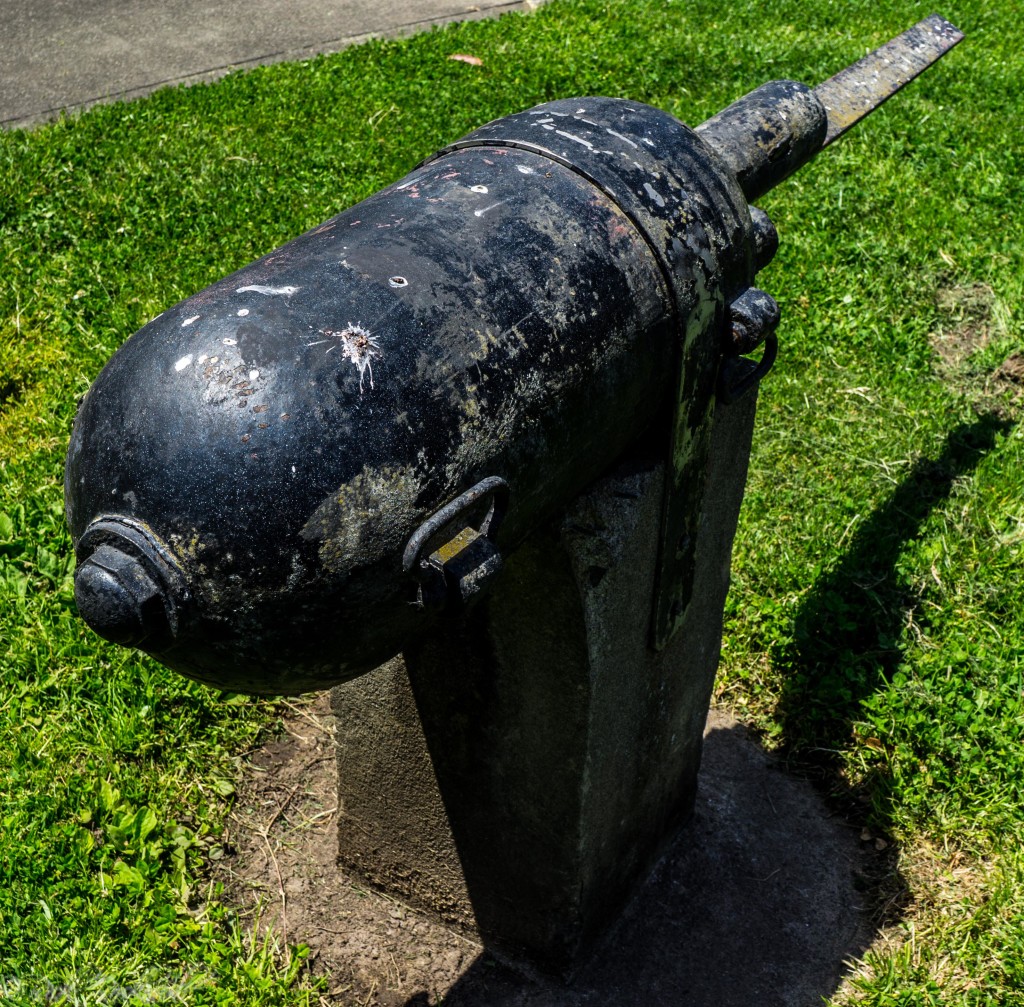 Dahlgren Smooth Bore Cannon: This cannon was from the historic USS Hartford battleship which famously saw action in the Civil War. Admiral Farragut fought his most notable Civil War battle on this ship. 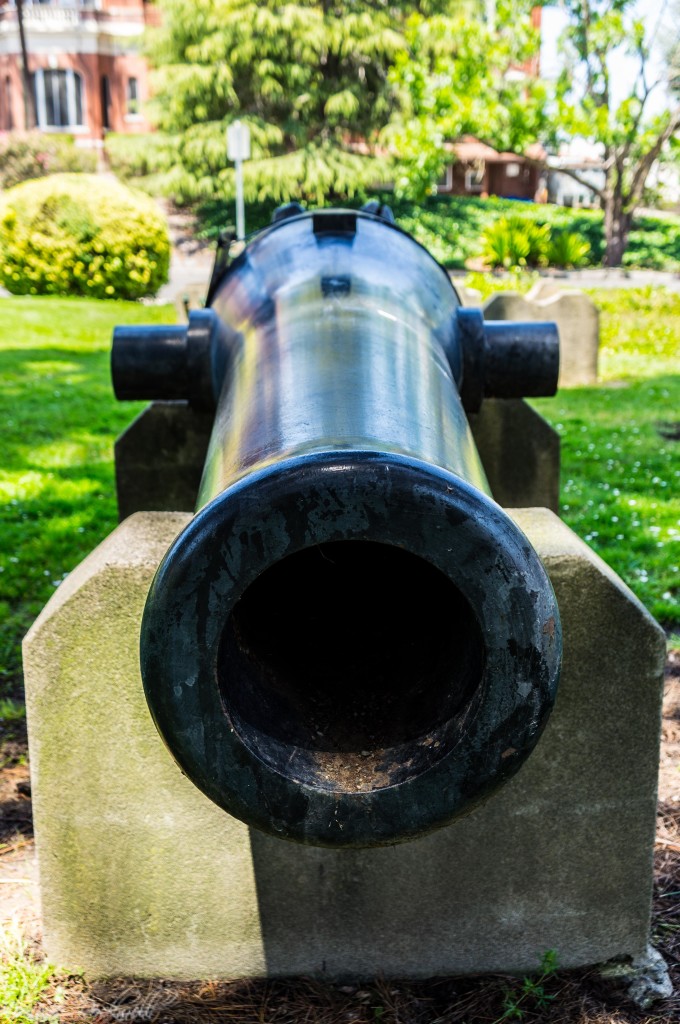 24 Pounder: This cannon was from the U.S.S. Independence, which was launched on June 22, 1814. This ship was an integral part during the Mexican War.

55 MM Hotchkiss Cannon: This revolving cannon is from the U.S.S. Thetis which was active during the 1930’s and 40’s. 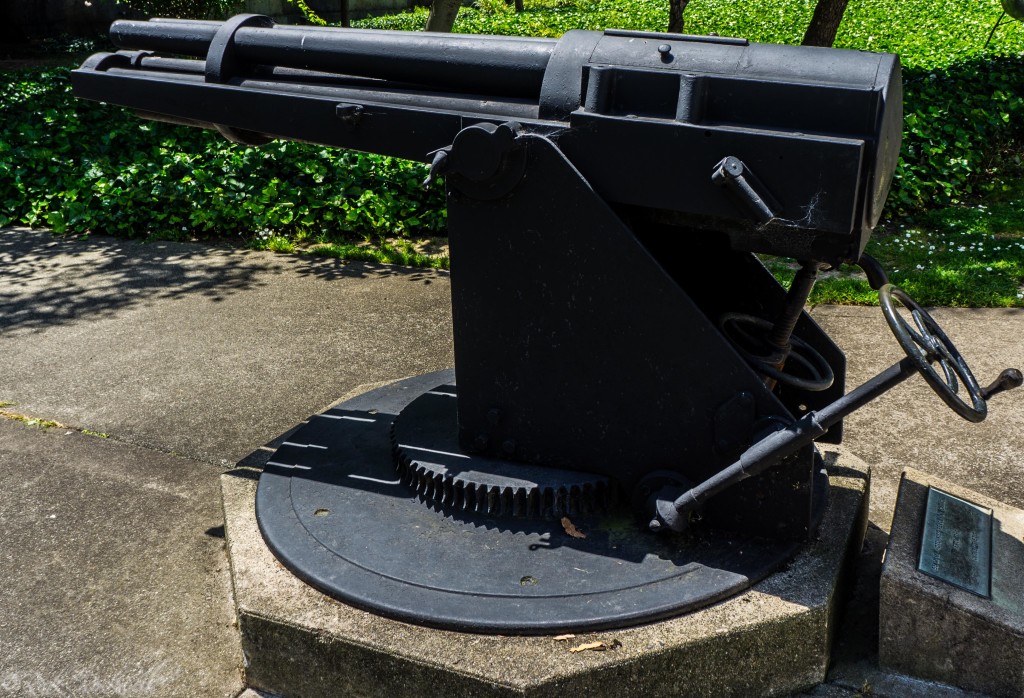 German Marder and Torpedo: This “Pine Marten” and Torpedo was captured during WW II. They were highly unsuccessful by the Germans and mostly considered a “suicide mission.” 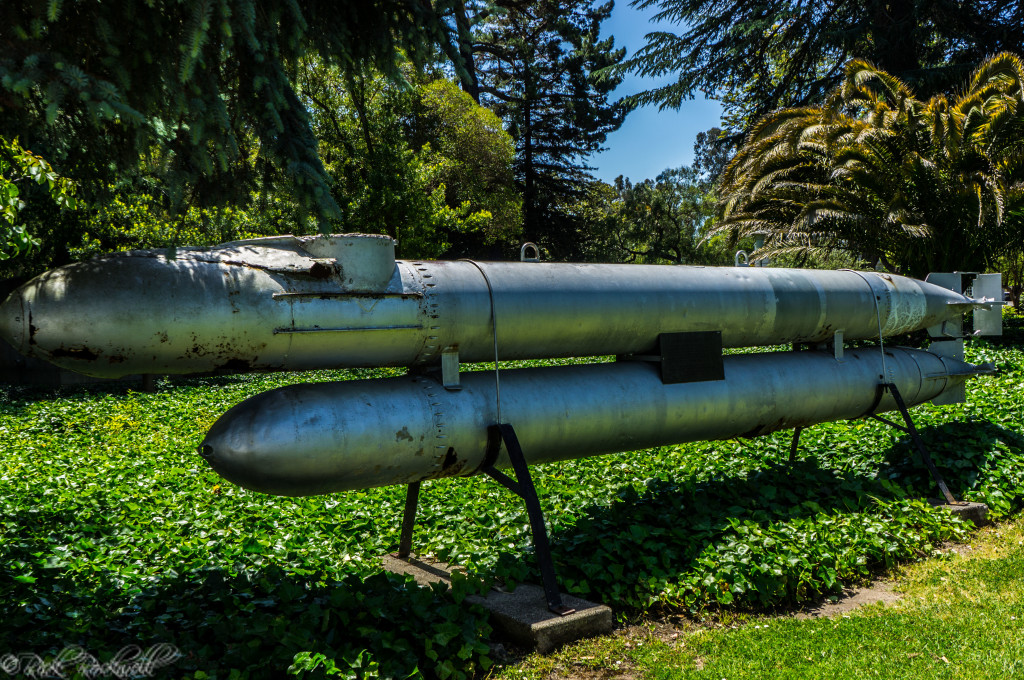 Polaris Missile: This missile is from the Cold War era and was loaded and shot from a nuclear submarine. These nuclear subs were built at Mare Island and this missile is a “memento” of that era. 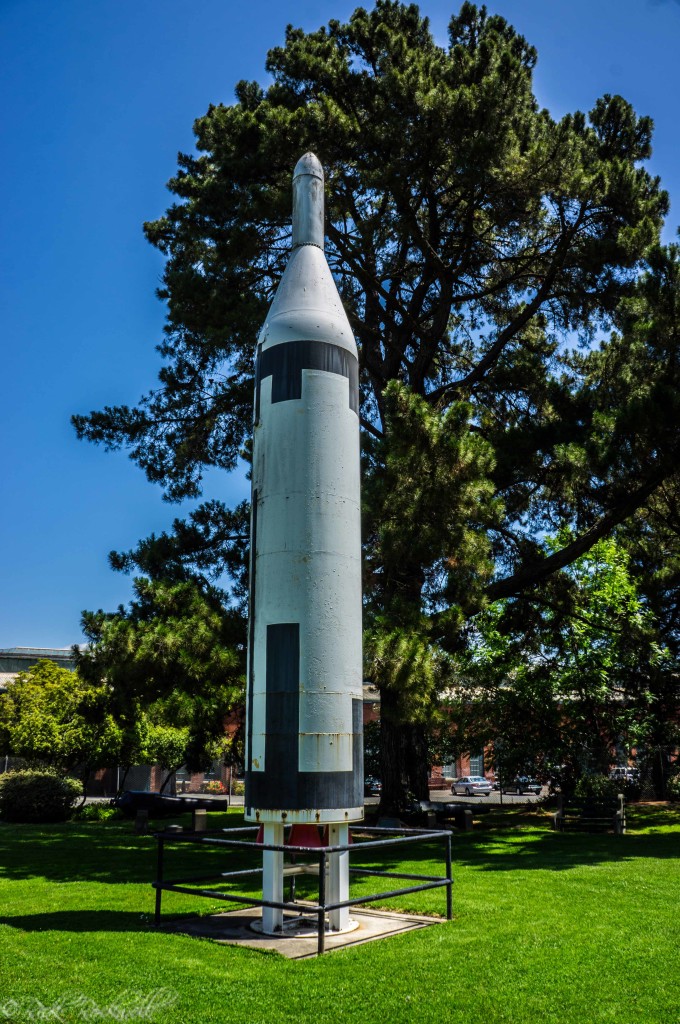 Subroc Missile: This anti-submarine weapon was created in the late 50’s to early 60’s and carried a nuclear warhead. 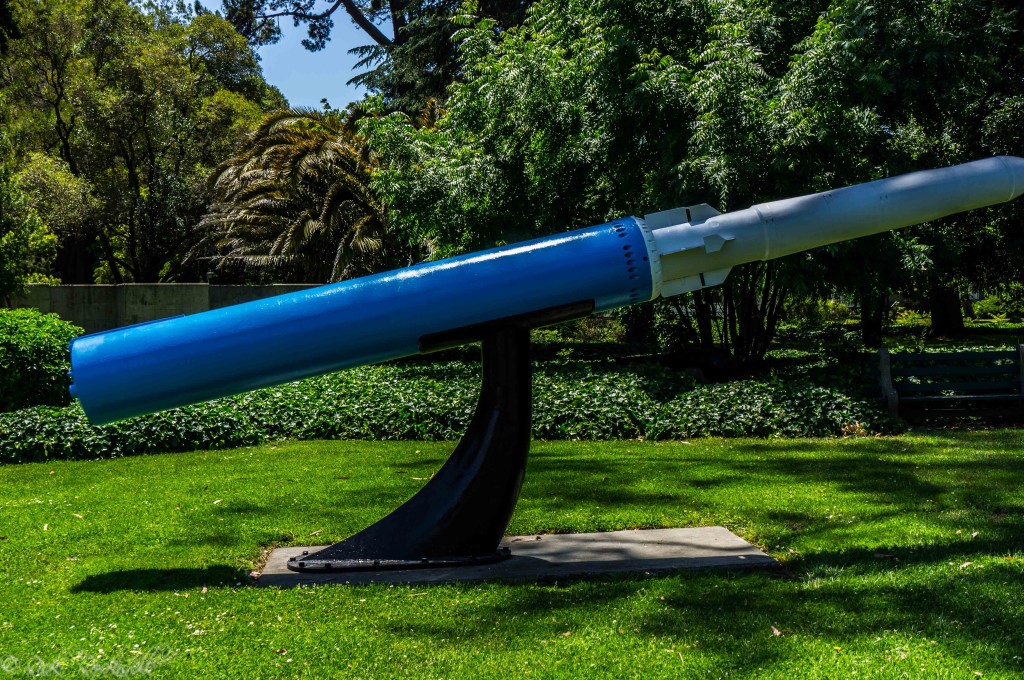 There are several monuments found in Alden Park. They are dedicated to various eras, various causes and to the servicemen who proudly defended this country. 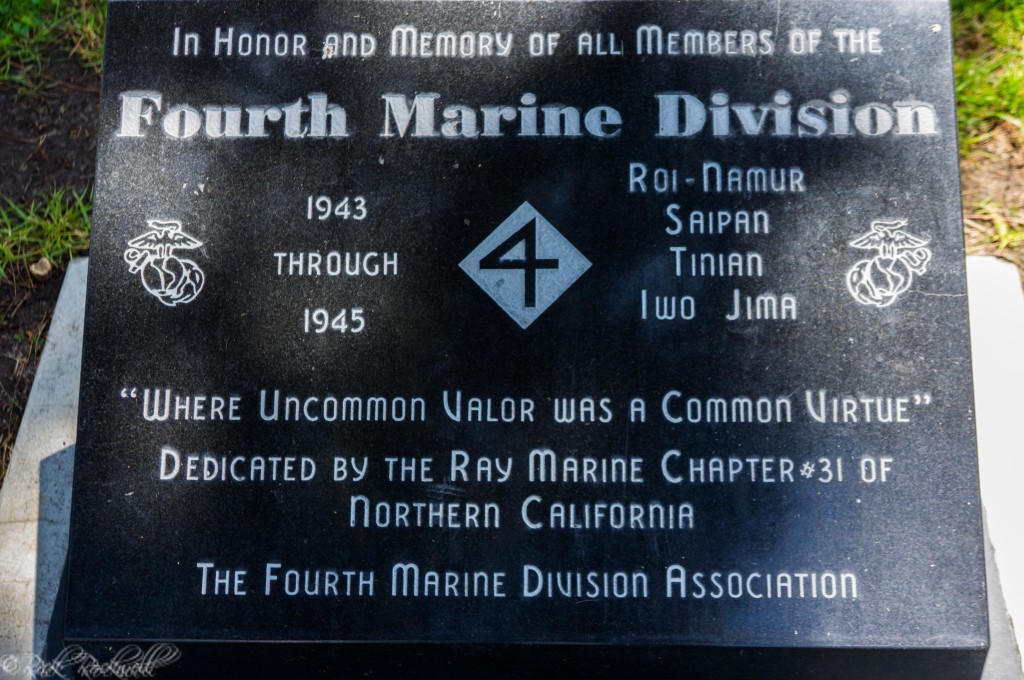 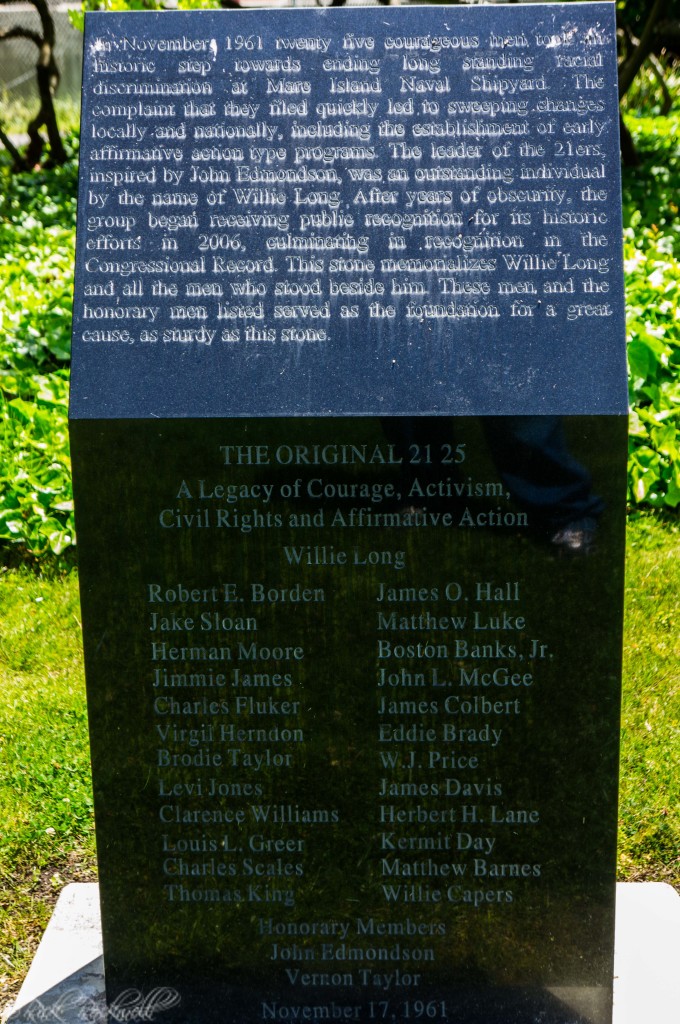 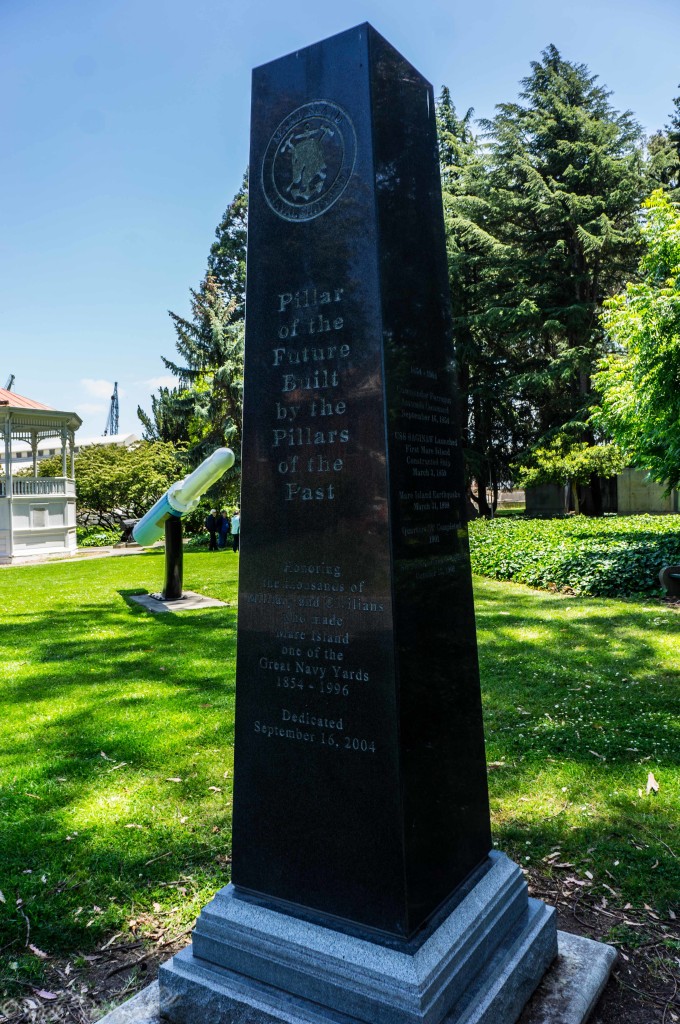 Fire up the BBQ, hail the marching band, and spend a beautiful day at this park. It’s the ideal setting for a picnic or photographs, and is surrounded by some amazing historical military weapons. The blend of these two American aspects make this park fun for children, Military buffs and us “big kids.”

Check out more of my Mare Island Adventures 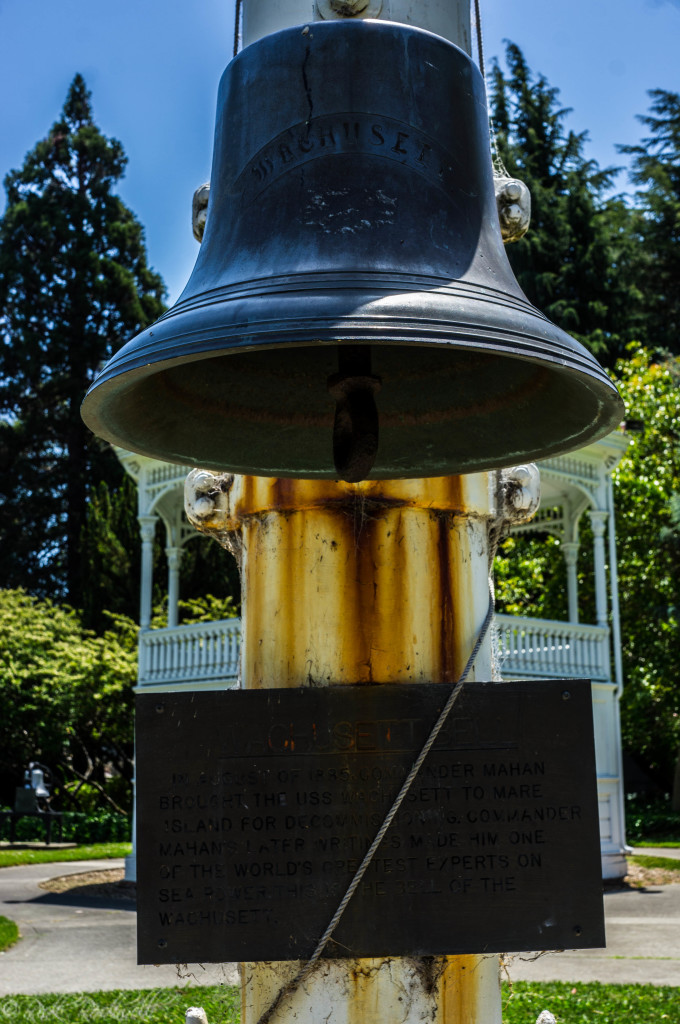 Take I-80 to Vallejo. From there, take Highway 37 West and exit on Railroad Ave. Take Railroad Ave all the way down to the park. Another option is to exit Tennessee St. in Vallejo and take that two miles to Mare Island Causeway. Then go over the bridge and make a left onto Railroad Ave.