History of the Church

St. Francis of the Mountains was a chapel long dreamed of by one of the region’s pioneers William Wightman Price, who developed the Fallen Leaf Lake region around the turn of the 20th century. By all accounts, Price was a fascinating character with a deep passion for the outdoors, wildlife, nature and helping others. From childhood to his final years, Price left an indelible mark on the people he met and the regions he worked in.

Price was born on January 20, 1871, in Milwaukee, Wisconsin. Within the first few years of his life, his mother died and he was sent to live with his grandparents who bounced around Wisconsin before heading to Nebraska. At a young age, William got to see many different cultures and places.

At the age of 8 years old, after already showing a proclivity for the outdoors and hunting, Price ran away to live with a band of Indians so he could see what hunting was really like. He returned a few days later with an unquenchable passion for nature.

A few years after his runaway, William moved to Riverside, California, with his father. Sadly, at the age of 14, William’s father died.  A young Price was now on his own in the world.

During his teenage years, Price seemed to go where the adventure took him. A restless William could never settle down in one location and spent 1 ½ years in Arizona before landing back in California. Price’s passion for the outdoors and wildlife fueled a budding zoology career that helped him pay for his expenses and led him to enrolling at Stanford University. He would go on to graduate from Stanford and also become a leading expert in ornithology and other branches of zoology. In the 1890’s, Price would begin spending a great deal of time in the Sierras where he developed a strong connection with the Tahoe region. 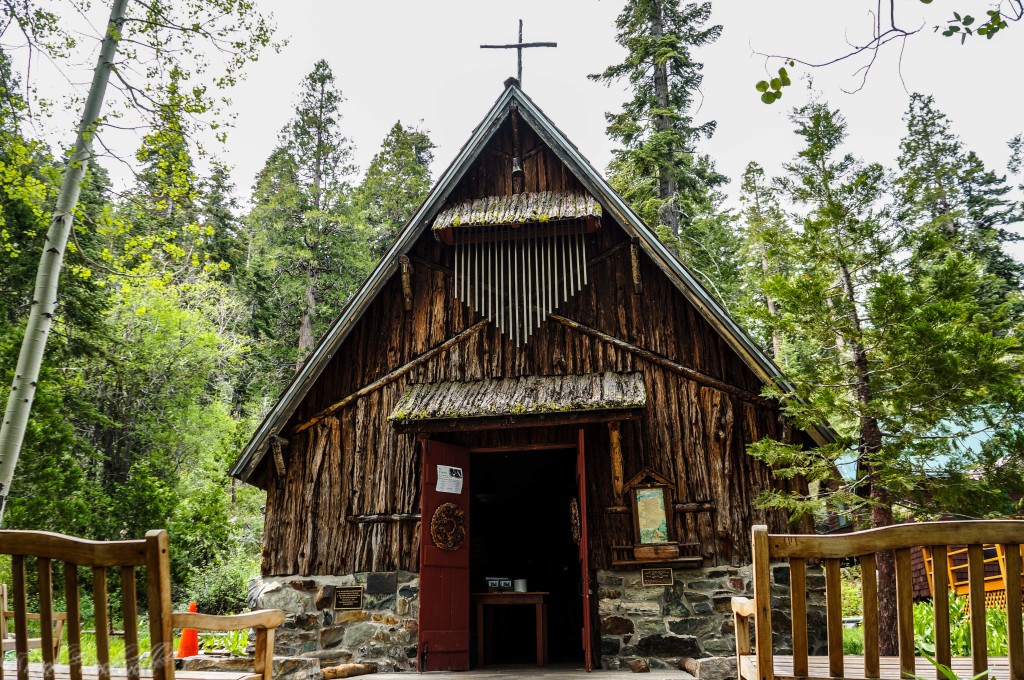 In 1897, Price founded a camp for boys called Camp Agassiz in Glen Alpine near Nathan Gilmore’s Glen Alpine Springs Resort. This camp was very successful under the guidance of Price, who also opened a boy’s school in Alta, CA, called Agassiz Hall in 1901. This school stayed in Alta until 1909 when it was then moved to Auburn, CA, before closing down in 1911 due to Price’s commitments to the Fallen Leaf Lake ventures.

In 1906, the Agassiz camp was moved down to Fallen Leaf Lake where Price built the Fallen Leaf Lake Lodge. The camp went until 1917 and then was closed down due to Word War 1. It was at this time that Price began working with the Red Cross.

The lodge remained in the family until 1959 when Price’s daughter Harriet sold it to the Stanford Alumni Association who had been running a camp there since 1953. In the 70’s and 80’s, Price’s grandson managed the lodge. The Stanford Sierra Camp is still in operation at Fallen Leaf Lake.

On a side note, Pulitzer Prize winning author John Steinbeck, who frequented the Fallen Leaf Lake region, was employed at the lodge during the late 1920’s. 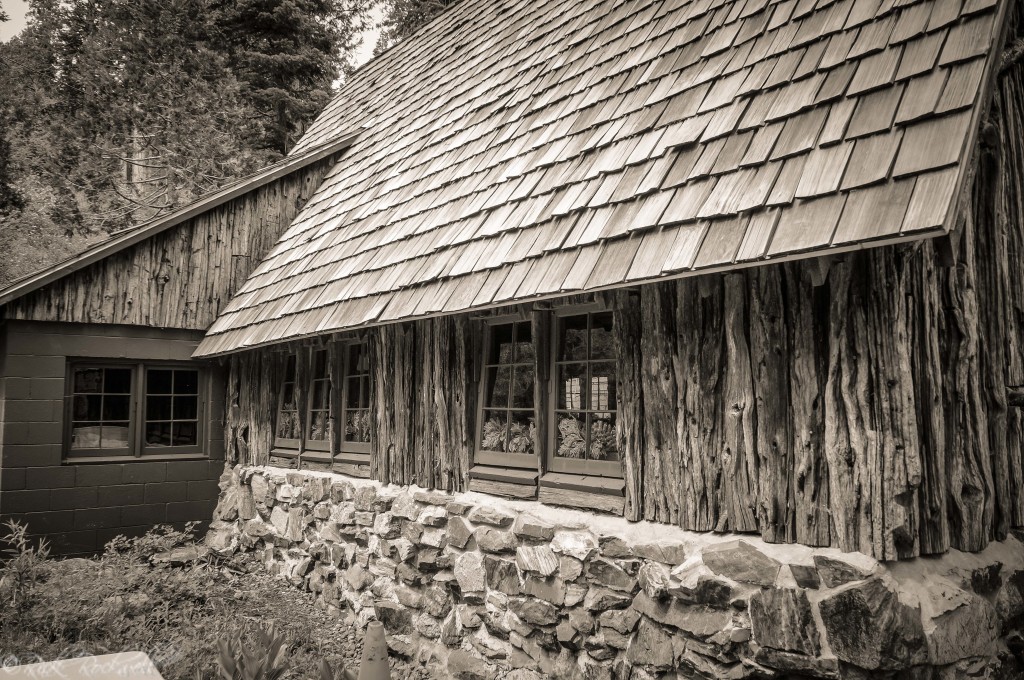 In the early 1900’s, church services were held outdoors in the woods. It wasn’t until 1919, when a den was added on to the Fallen Leaf Lake Lodge, that services were held indoors. Despite this newfound accommodation, Price and his wife Bertha DeLaguna (also a fellow Stanford alum) still desired to see a chapel built. So, in 1921, a stone foundation was laid and in 1922, Carpenter VOLK framed the building.

Price named the church after St. Francis Assisi who was the patron saint of birds and animals. Many legends and tales have passed through the centuries that St. Francis could actually talk to animals. Ironically, some believed that William Price could as well. In 1979, St. Francis became the Patron Saint of Ecology.

Sadly, William would not get to see his dream chapel completed. With his health failing, and a looming battle with Brighton’s disease, Price died on November 9, 1922, in Palo Alto and is buried at Alta Mesa Memorial Park. He left behind his wife and two daughters who continued to develop and pioneer the Fallen Leaf Lake region. For more on William Price, check out this wonderful biography.

In 1923, the chapel was finally completed. The first service was performed by Rev. David Evans on July 1, 1923. Additionally, it was dedicated to the memory of William Wightman Price. According to LakeTahoeNews.net, the first christening was in September of 1924 and the first wedding was in 1926.

“The spiritual heart of the whole of Fallen Leaf is, indeed, this Chapel of St. Francis of the Mountains.”

That quote by Bishop McNair appropriately sums up what the chapel meant to the Fallen Leaf Lake area. In fact, when you visit this chapel, you can still feel the spiritual pulse of this region.

The chapel was originally founded as non-denominational. However, in 1978, the Price family deeded the chapel to the Episcopal Diocese of Northern California, according to Lake Tahoe News. 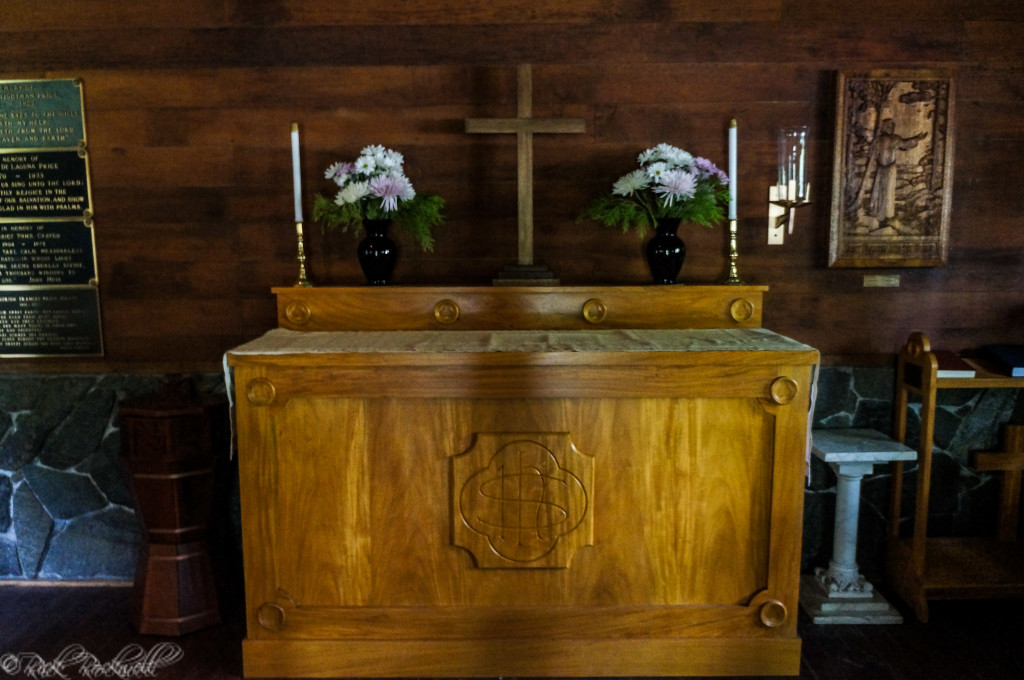 Inside, there’s a cross that was used at the chapel of St. Grace Church in San Francisco after
the 1906 earthquake. Additionally, the marble table was carved from unbroken pillar of the communion rail that was originally in the “old” Stanford Chapel. 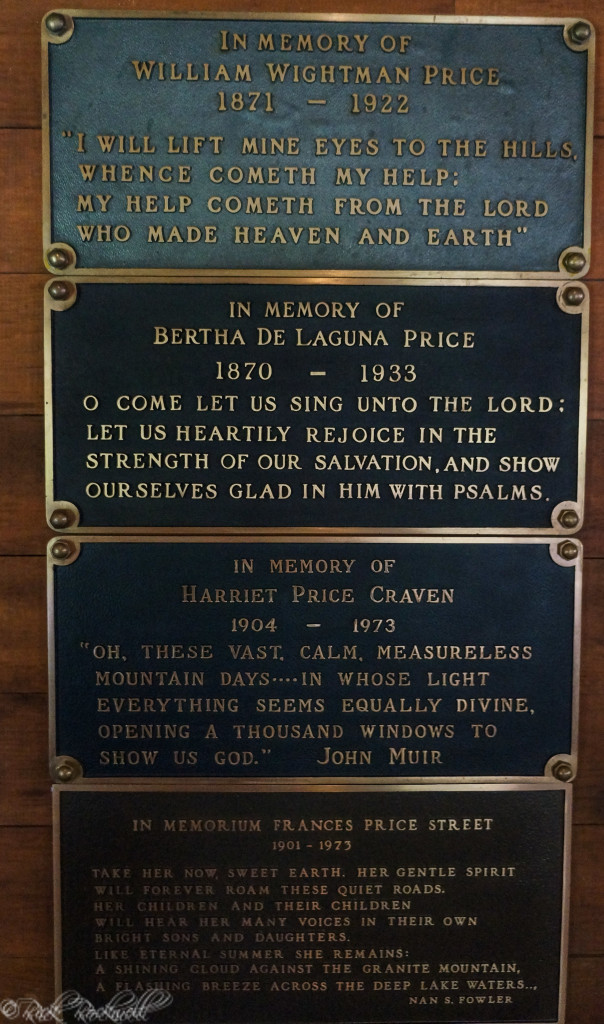 There’s also several memorial plaques inside the chapel that honor the Price family. These memorials spill over to the outside too, where there’s a plaque to the left of the entrance for Nathan Gilmore. 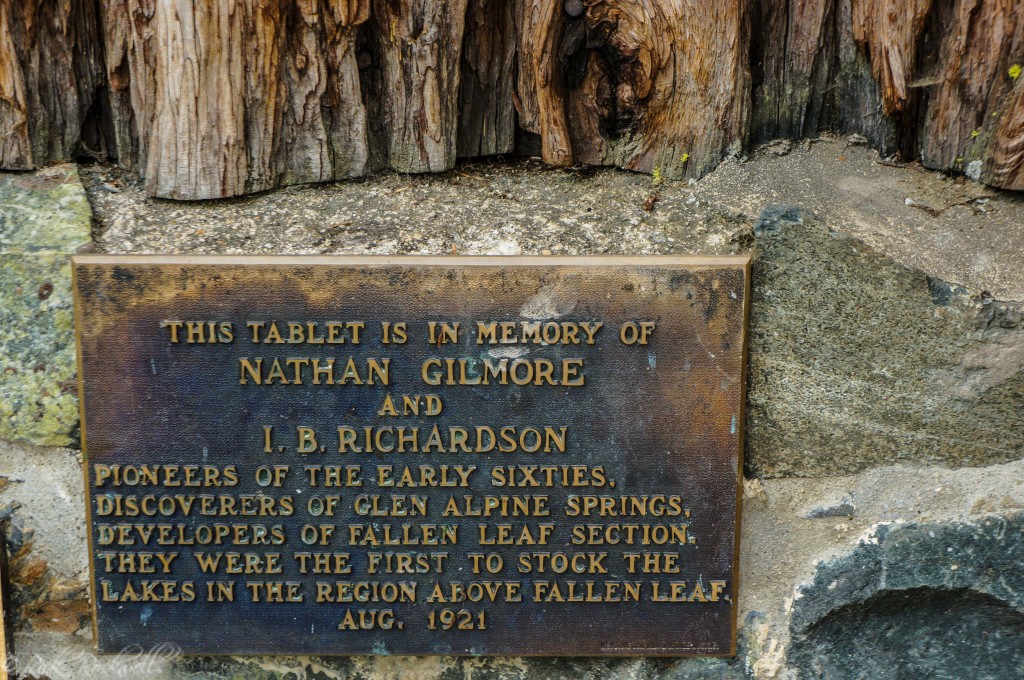 Additionally, a lovely memorial garden can be found to the left of the church, where a little trail leads to a stone courtyard that has dozens of memorial plaques. 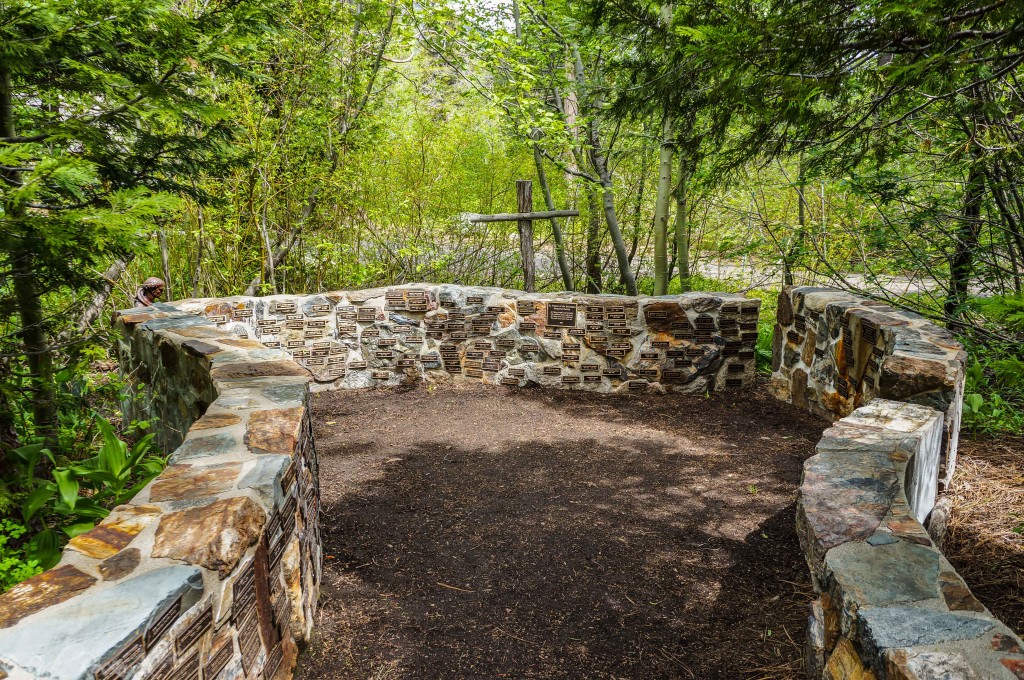 After making multiple trips to the Fallen Leaf Lake region, I finally had a chance to visit the chapel during open hours. This chapel is like a cabin in the woods, immersed in the tranquility of the Tahoe Basin. The church is tiny compared to many other churches in the Tahoe area. However, its location and history are pillars to the Fallen Leaf Lake region. The memorial garden keeps alive the memories of this area with nice tributes to the pioneers and longtime church members.

You won’t find many churches like this anywhere else in California. You can’t miss this chapel if you are driving around Fallen Leaf Lake or heading out to Glen Alpines and beyond. Make sure to stop by this chapel and sign their guest book. All visitors are welcomed! 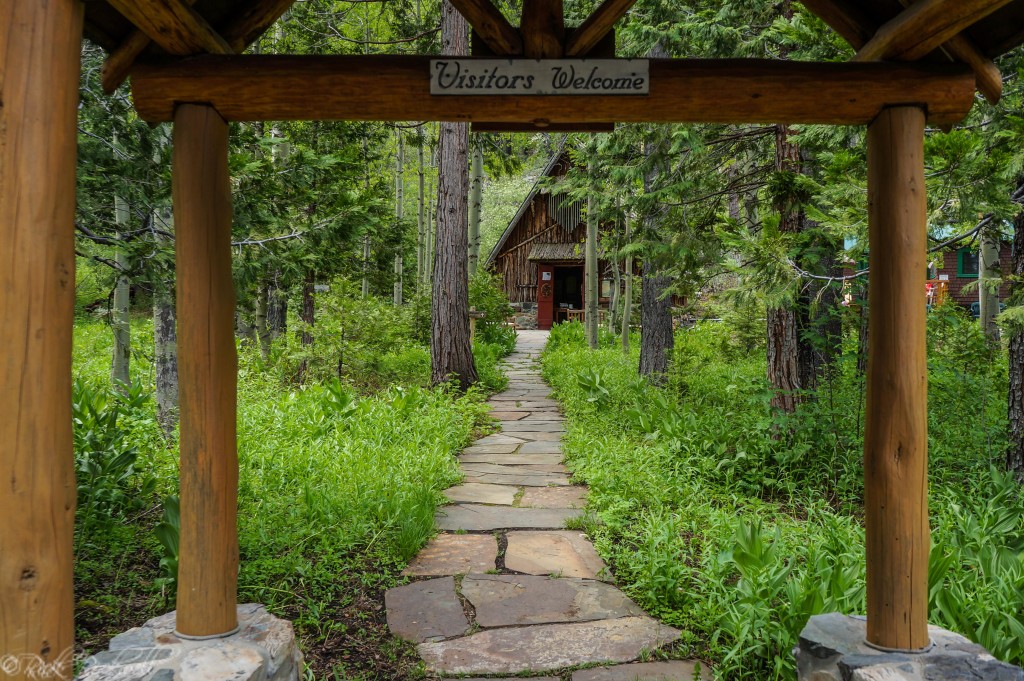 From the split of Highway 50 and Highway 89, take 89 roughly 3 miles until you make a left onto Fallen Leaf Lake Road, just past Camp Richardson. This becomes a narrow one lane road that you need to drive carefully on. The road winds around Fallen Leaf Lake for about 3.5 miles until you get to the chapel and the fire station. The St. Francis of the Mountains chapel is just before the fire station, on the left side of the road.