Sitting along the Garden Highway is an incredible roadside attraction with a fascinating tale. This giant paddlewheel boat (the Spirit of Sacramento) was originally created as a snagboat, but went on to star in a Hollywood film, was owned by John Wayne and eventually provided hundreds of cruises up and down the Delta River. At about 100 feet long and roughly three stories tall, the “spirit” of this boat lives on with each wide-eyed visitor.

The Putah was built in 1942 by the Berkeley Steel Construction Company as a snagboat for the U.S. Army Corp of Engineers (USACE). This organization is responsible for developing, investigating and maintaining the nation’s water resources and related environmental resources.

A snagboat’s primary purpose was to remove snags and other obstructions from rivers so that people and other boats (like steamboats) could safely pass through. Snags could cause serious damage to a boat by puncturing the exterior and causing it to sink.

In the late 1940’s, the Putah was still actively working up and down the Sacramento River. According to the Oakland Tribune (Apr 25, 1948), the stern wheeler was diesel electric, 98 feet long and mastered by Marshall Fall.

The Putah is believed to have been in operation with the USACE until purchased by John Wayne in the fall of 1954 for his film Blood Alley. Wayne’s company purchased the boat from William Mitchell.

The following details about the Putah is from an August 21, 1954, article in the Daily Independent Journal out of San Rafael:

“Built of iron, her length is 82 feet and her beam 24 feet, and she does 10 knots. A V8 Caterpiller Diesel electric engine, turns the generator providing electricity for the enormous paddle wheel in the stern. Her hull, composed of ballast tanks, can be filled with water and give her great drive, or emptied and enable her to navigate in extremely shallow waters”

The article also stated that the Putah had a galley, stateroom, a comfortable crew’s quarters, was skippered by Cass Gidley and had an engineer named Bill Lowden.

Blood Alley, produced by John Wayne’s company Batjac, was a 1955 film about an anti-Communist merchant marine who was freed from a Chinese prison and would rescue hundreds of villagers by taking them on a daring boat escape to Hong Kong.

The film was based on a novel by Aaron Sidney Fleischman and directed by William A. Wellman. It starred John Wayne as the hero and Lauren Bacall as the “love interest.” Ironically, John Wayne was a last minute substitution for this leading role as Robert Mitchum was the original choice. However, after a falling out with the director, Mitchum was removed. Gregory Peck was next in line, but turned down the offer. Next was Humphrey Bogart who reportedly asked for too much money. So, Wayne stepped in.

The Putah would make its Hollywood debut and receive a makeover to play the part. Named the Chicu San/Chiku Shan in the film, some could even argue that our beloved Putah played a major role and quite possibly stole the spotlight from Wayne and Bacall.

The following excerpt is from a 1955 film review of Blood Alley by the New York Times:

“Their grand plan is to take all of its 189 souls aboard an ancient, wood-burning, stern-wheeler ferryboat, with Captain Wayne as the expert, intrepid pilot at the wheel, along the dangerous 300-mile route to Hong Kong and freedom. And before the battered Chiku Shan makes port at Hong Kong, it has weathered a chase by a gunboat, a storm, the sinister machinations of a Communist family aboard, a waning food and fuel supply and a bombing by a destroyer.”

Sometime after the film was completed, John Wayne sold The Putah to Frank Parisi, a Sacramento businessman that owned Parisi’s Fine Italian Food located on Fulton Ave. He renamed the sternwheeler the Mansion Belle and offered river cruises along the Sacramento River and through the Delta. According to the Center For Sacramento History, the boat was docked at Front and O streets. Parisi promoted the boat as ‘the only sternwheeler West of the Mississippi’.

In 1957, the boat was involved in an accident, which was just the beginning of a long line of incidents that this vessel would endure. The Mansion Belle apparently rammed into a cottage and lost 10 blades from the stern wheel.  The following article is from the Sausalito News dated August 24, 1957:

In 1959, the Mansion Belle made a voyage up to Oregon for the “Oregon Centennial.” It provided opportunities for passengers to cruise up the rivers and envision what life used to be like when boats like these were a main source of transportation.

After this voyage north, things get confusing in regards to the ownership and whereabouts of the Mansion Belle.

According to The Independent (Feb 19, 1959) out of Long Beach, a California corporation allegedly purchased the Mansion Belle for $65,000. The ship was supposed to be renamed the Lillian Belle and towed from Oakland down to San Diego’s Mission Bay. As of now, I’m unable to find any information on this actually happening. However, quite the opposite happens.

By the summer of 1961, the Mansion Belle was back in Sacramento providing cruises from Sacramento down to Walnut Grove and back. But, it’s time in Sacramento seemed short lived.

Three years later, the Mansion Belle finally made its way down to Southern California, but it started running cruises out of Marina del Ray. According to the Los Angeles Times (Oct 28, 1964), the Mansion Belle was the new “party boat” in town. The ship was all cleaned up and had a Victorian décor. There was an upper and lower salon and two bars that made this ship like a floating restaurant. A renowned chef named John Cirner was in charge of the food services.

The Mansion Belle earned quite the reputation for a good time. In addition to running regular cruises, the Mansion Belle was also privately chartered for many different events. Some of the more “memorable” events included proms and the Miss Marina del Ray pageant.

A year later, the Los Angeles Times reported that the Mansion Belle was operated by Bob Morris whose family ran Paradise Cover for many years.

In 1966, the sternwheeler made its way down to Long Beach where it provided romantic cruises around the harbor. She could only stay within the harbor’s limits due to the potential damage she would suffer from going into the ocean. In October of 1966, the Mansion Belle took on the Princess in a grudge riverboat race. This was the first of its kind in California and our beloved sternwheeler won the race. She was skippered by Gary LaMont. (Independent Press Telegram – Oct 23, 1966)

Unfortunately, I have no idea what happened to the boat in the 70’s and 80’s. Eventually, it would make its way back to the Sacramento region by the early 90’s and once again, provide cruises along the river.

The Spirit of Sacramento

In 1997, William Barker purchased the damaged boat with the intentions of restoring it to its glory days and renaming it “The Duke.” Barker also owned another boat the Grande Romance, which he took passengers on river cruises and attempted to model it after the Spirit of Sacramento.

Despite dropping over a half million dollars in repairs on the Spirit of Sacramento, Barker’s plans were foiled due to what he called “pirates” constantly damaging his ship. Eventually, the paddlewheel riverboat was left abandoned, tied up along the Sacramento River. For the rest of the 90’s and into the 21st century, the boat could be seen half sunk in the river.

Around 2006, a massive effort was undertaken to raise the partially sunken boat. You can see this effort in the KCRA news video above.

However, this large vessel was causing concerns with other businesses and people throughout the river area. Over the next few years, growing fears of the boat floating down river and destroying everything in its path led to a public lobbying for its removal.

In 2012, the Abandoned Vessel Program was underway and the Spirit of Sacramento was one of the first abandoned boats to be targeted by authorities. Eventually, a court ordered that the boat be removed from the water and placed on land where it still sits today.

Final Words on This Historic Vessel

The Spirit of Sacramento (now referred to as the “old” Spirit of Sacramento due to a newer vessel taking on the same name) is incredible to see in person. In fact, it’s almost surreal when you first lay eyes on it. Here’s a massive riverboat among the trees, just screaming to be restored and placed back in the water. Sadly, it appears that this could be the boat’s final resting place as there has been no word of any future restoration plans.

This is without a doubt, one of the coolest Roadside Attractions that I have seen in all of California and I’m sure you will enjoy it too. 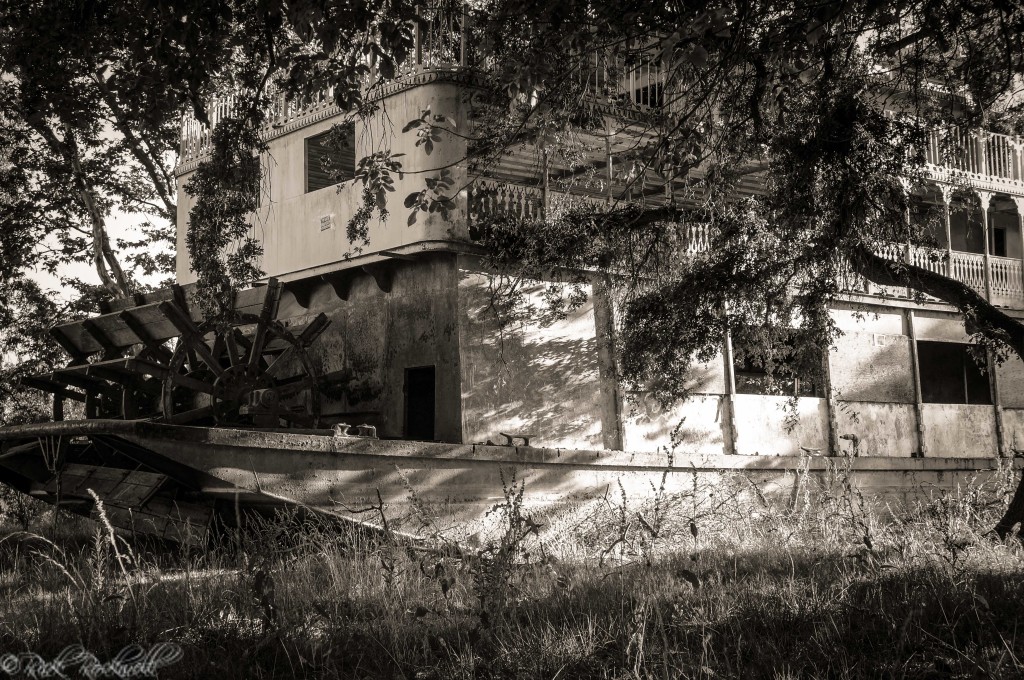 Since the boat is on private property, I am unable to give the exact location. However, it is along the Garden Highway, north of the Sacramento airport, and on the west side of the highway. Additionally, there are no parking spots along the highway where the boat is located. There are numerous “No Trespassing” signs all around this area. I suggest adhering to these signs. 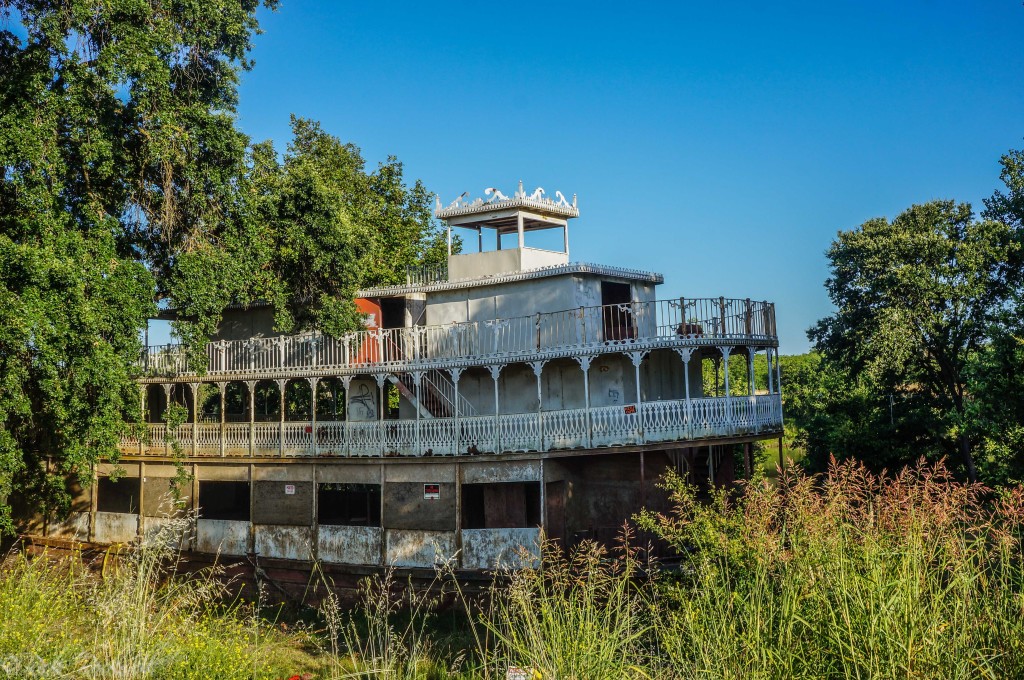