The Old Webster Schoolhouse is a carefully restored and preserved late-19th century schoolhouse that served Alpine County from 1882 to 1928. This near-700 square foot structure was built on a hilltop, overlooking the small rural town of Markleeville and the surrounding beautiful Sierra landscape.

A Need for a School

In 1864, Alpine County was officially created partly due to an increase of silver miners passing through the region, the allure of the Alpine gold fields, and a growing number of ranchers that increased since the region’s first settlement of Woodford in 1855.

A year prior to the county’s inception, one of the region’s pioneers Jacob Markley was shot and killed in a gun fight. The community honored his memory by embracing the town name of Markleeville.

When the silver mines and gold fields started to decline, and silver took a hit in value, the county saw a mass exodus of residents and the population dwindled from a high of 11,000 down to roughly 1200. Some of the region’s central hubs like the county seat of Silver Mountain City became a ghost town. This led to Markleeville becoming the county seat in 1875.

Around this time, town residents were using various rooms throughout the area for a schoolhouse including what eventually became a stable. With the town taking on the importance of county seat, and a modest amount of residents remaining, a need for an official schoolhouse became evident. 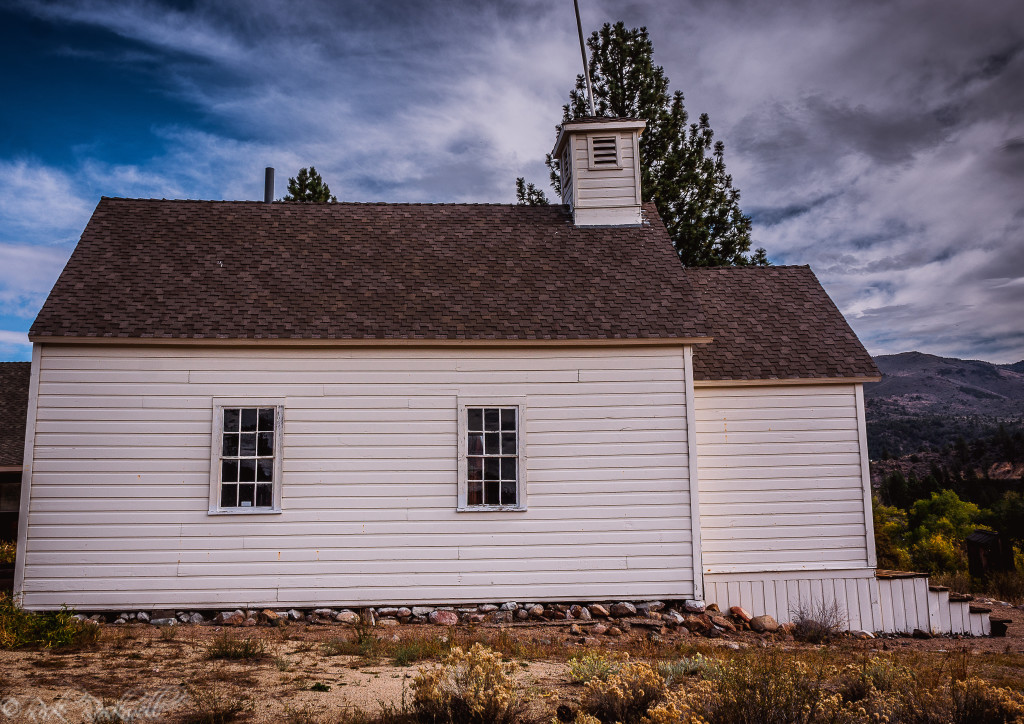 The town residents began raising funds to build a school. Events like dances and “socials” were used to gather the townspeople and to collect donations. Additionally, locals volunteered their services to the actual construction of the school which began on December 15, 1882. Anna M. Arnot, Superintendent of Schools, was a driving force behind the building of this “new school.”

According to the Monitor Argus, Oct 12, 1883, the school was described as “a neat and cozy one which all of us should feel proud of.”

The schoolhouse was a common example of a standard wood framed one-room schoolhouse from this era. It had a single room with a front and back door, was roughly 564 square feet in size and had two double hung windows on both the east and west side walls. Additionally, two same-size windows were at the front of the schoolhouse.

Initially, the back wall had a chimney to provide heat for the school. This chimney was built by Hank Matthews. However, in the 1890’s, the chimney was removed and a cast iron stove was installed within the classroom. Also during this time, a foyer was added to the front of the school. 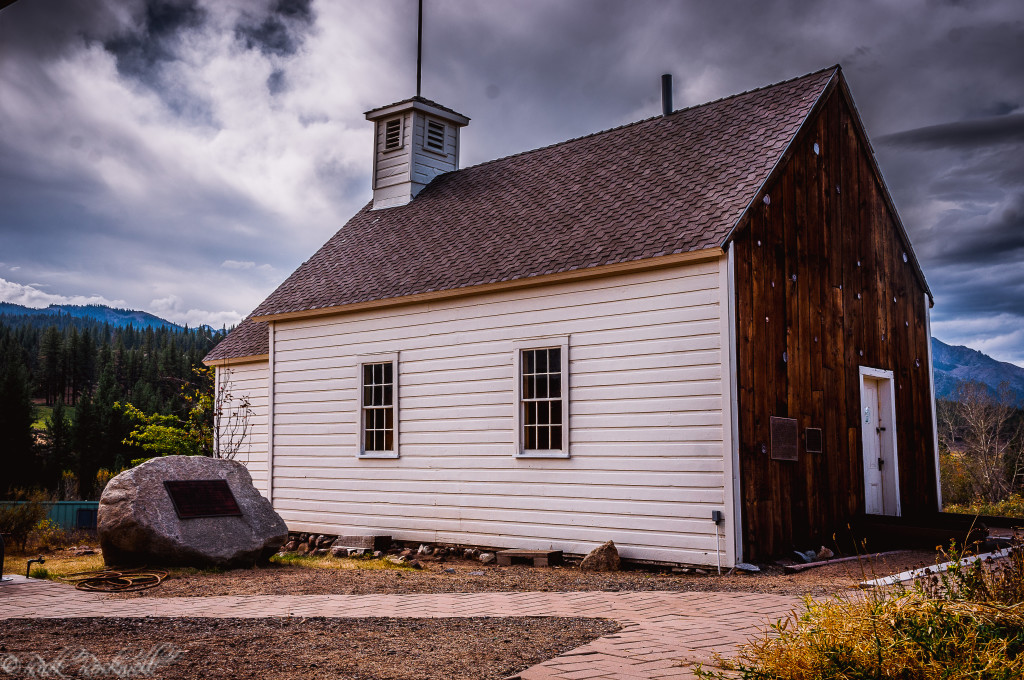 The foyer (or cloakroom) added roughly another 130 square feet to the overall schoolhouse. It was used as a transitional place from outdoors into the classroom. Additionally, lunches, shoes and coats were stored there.

The school mainly used sunlight, but also had three oil lamps that hung down the center of the room. Electricity didn’t come to town until the late 1940’s.

On top of the roof was a bell tower that was used as the school bell and for town emergencies like fires.

The first day of school was in October of 1883, and students from the ages of 5 through 17 were taught there. T.P. Larkin, the teacher, was an educated and dedicated man who also held other roles in the community like editor and publisher of the Alpine Argus, also known as the Monitor Argus, according to Rowell’s American Newspaper Directory published in 1887.

The curriculum was based on each student’s ability and not their supposed grade level. In the first month of school, there was an average of 14 pupils in attendance and 25 cases of tardiness which prompted Larkin to make the following comments:

“If parents will cooperate with the teacher by exercising a careful vigilance over the regularity and punctuality of their children in attending, the pupils will be incited to put forth their best efforts.” (Monitor Argus Nov 2, 1883)

Water was carried up to the classroom by buckets from the town ditch, which was roughly 50 yards away. Additionally, there was an outhouse and playgrounds near the schoolhouse.

In 1885, a school district census report stated that there were 37 pupils. Also that same year, The Great Fire of 1885 almost completely destroyed the town of Markleeville as it swept through Main Street destroying everything in its path. Fortunately, the school was out of harm’s reach due to its location on the hill. 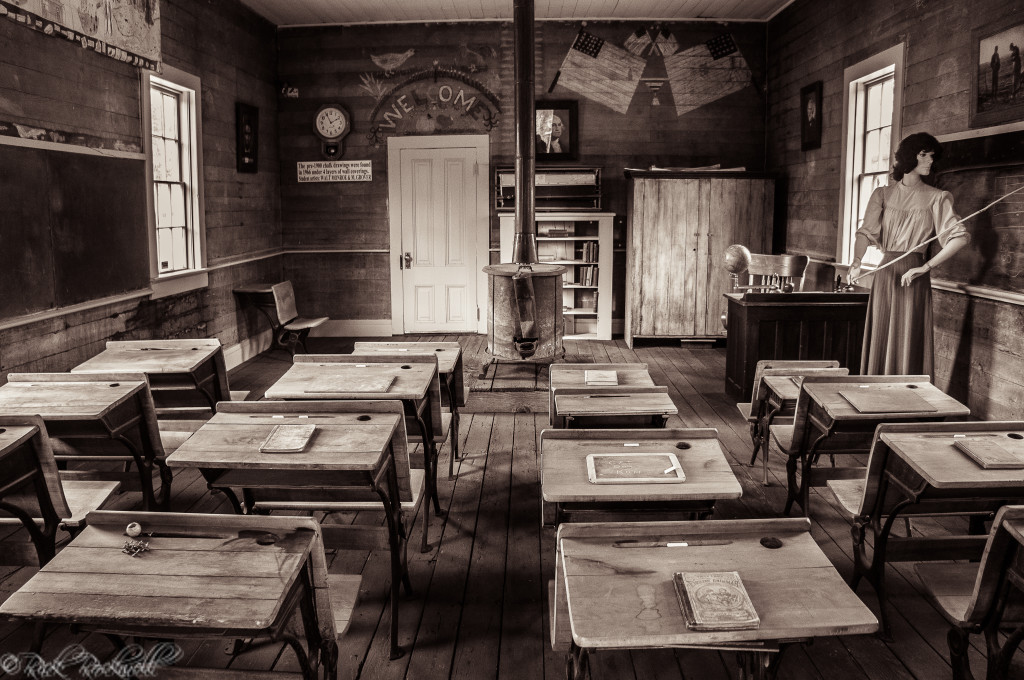 In 1928, a new schoolhouse was constructed to meet the growing demands of the town’s population and evolution. What was once a central meeting place for the townspeople, The Old Webster Schoolhouse became a home for a local Washoe family. However, by the early 1960’s, the schoolhouse was abandoned and left in a state of despair.

In 1966, the Alpine County Historical Society took interest in this school and began raising funds to restore the beloved piece of history. Eventually, enough funds were raised and the restoration process was completed in 1968.

Materials were donated from other historical towns (State Parks) like Coloma and Colombia. Additionally, residents donated desks, chairs, clothes and other items from that era to be put on display.

Eventually, the Alpine County Historical Complex was built, with the schoolhouse being the centerpiece. Additional historical structures were brought over like the Silver Mountain City jail which some believe is haunted. This complex is a great opportunity to walk through Alpine County’s history and immerse yourself in simpler times. Check out my article on the complex for more details. 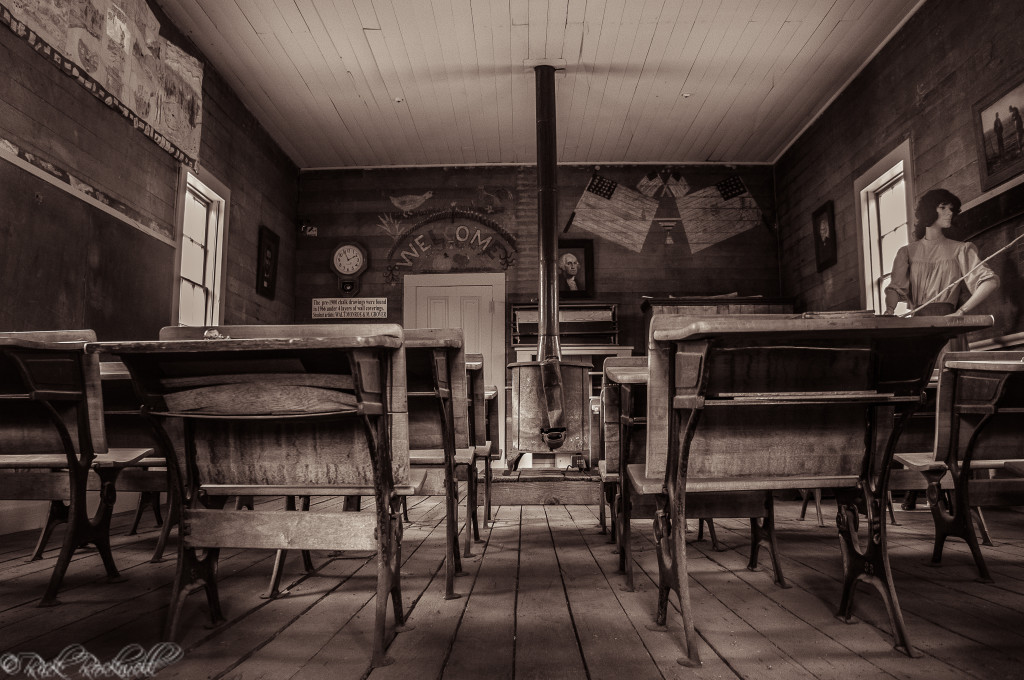 I want to thank the staff at the Alpine County Museum for providing me with a lot of great historical information on the school. If ever in the area, I highly suggest checking out the schoolhouse and spending some time in the rural mountain town of Markleeville.

The following is the address for the Historical Complex where the schoolhouse is located: